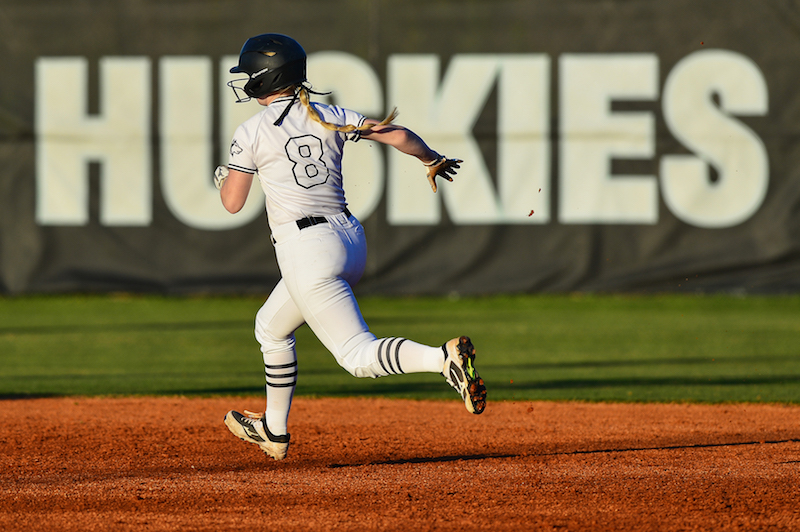 The Helena Huskies took down rival Pelham on Monday, April 11 to finish area play 6-0, before coming back a night later to take down Corner 11-6. (For the Reporter/Jeremy Raines)

The Helena Huskies continued their special 2022 softball season April 11-12 with two more wins, including an emphatic finish to area play in the regular season.

Taking on rival Pelham on Monday, April 11, the Huskies took down the Panthers 11-0 to close out area play a perfect 6-0 ahead of the upcoming area tournament.

Helena scored eight runs in the second inning to create separation and went on to pull off the shutout in five innings after outhitting Pelham 10-2 in the game.

A night later, the Huskies improved to 25-3-3 overall on the season with an 11-6 victory that saw similar success at the plate.

Helena again had a big second inning, scoring seven runs, before then scoring two in the third, one in the fourth and one more in the fifth.

Corner, who led 1-0 after one inning, attempted a late push with three runs in the fifth and two more in the sixth, but the Huskies finished off the victory with a scoreless seventh inning.

In the win against Pelham, Bella Holliday was big at the plate thanks to a 2-for-2 game featuring a home run and three RBIs. Alana Scott led the team with a game-high four RBIs thanks to a bases-loaded triple, while Sara Ezekiel and Mary Beth Allen both finished 1-or-2 with an RBI.

In the circle, Stanbridge got the start and struck out three while allowing no runs on one hit and no walks. Victoria Mauterer closed the final two innings and gave up one hit and no runs or walks.

A night later, Holliday went deep again with a solo home run, while Lively finished 3-for-4 at the plate with three RBIs. Erwin and Haley Morris added two RBIs on one hit each, while Scott notched two more hits with an RBI.