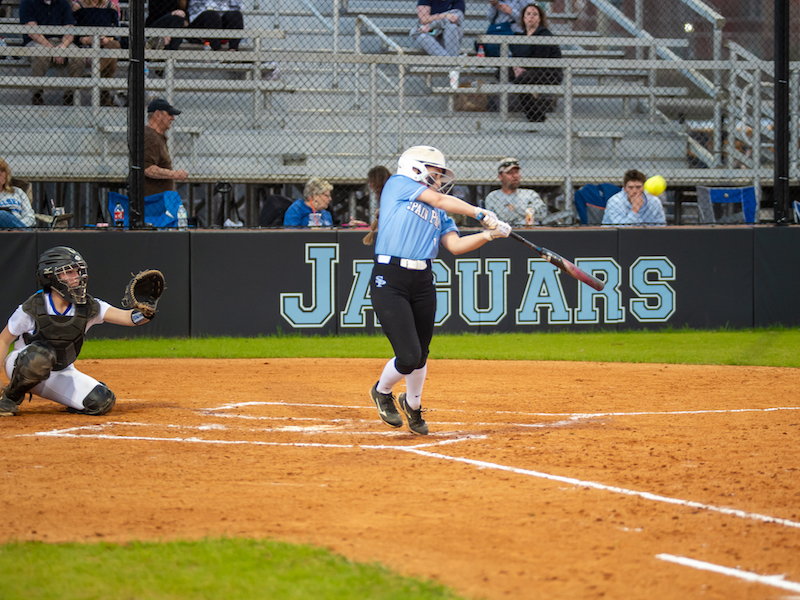 The Spain Park Jaguars took down Oak Mountain 4-0 on Tuesday, April 12 to improve to 3-1 in area play with two area games left. (File)

NORTH SHELBY – The Spain Park Jaguars hit the road for the short 2-mile trip to rival Oak Mountain on Tuesday, April 12 and came away with a tightly-contested win to continue battling for hosting rights in the area tournament.

With the regular-season area title up for grabs between the Jags, Oak Mountain, Hewitt-Trussville and Vestavia Hills, Spain Park used a three-run sixth inning to put the final stamp on a 4-0 win against the Eagles.

Spain Park took the lead early in the game thanks to a two-out RBI single from Maggie Daniel. Emma Jolley led off the inning with a single to second, before a groundout and line out put two down.

Daniel then stepped to the plate, and in a 0-2 count, she laced a single to left field to drive home Jolley for the 1-0 lead.

From there, the game boiled down to pitching, and Ella Reed was on her A game.

She didn’t give up a run through the first five innings, which set the stage for a patient Spain Park offense that eventually broke through with a three-run top of the sixth to take a 4-0 lead.

Reed then finished off the final two innings without allowing a run to complete the shutout victory.

She struck out 13 in the win and gave up two hits and one walk.

At the plate, Katie Flannery made a huge difference with a three-run home run in the sixth that ultimately ended any danger of an Oak Mountain comeback.

Daniel had the one RBI on her first-inning single, while Emma Hawkins, Jolley, Charlee Bennett and Reed each had one hit in the win.

The Jags will now take on Hewitt-Trussville and Vestavia April 18-19, respectively, to determine who will host the area tournament.