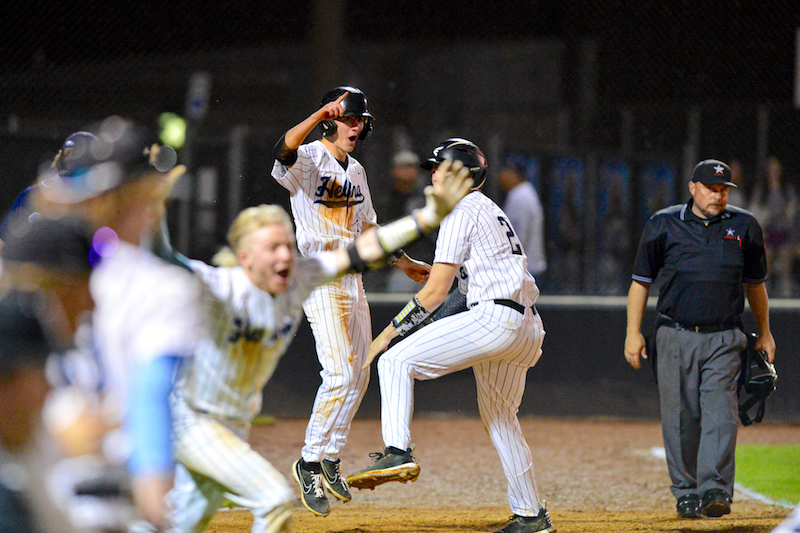 The Helena Huskies claimed the area championship on Wednesday, April 13 after completing a sweep of Chilton County to finish area play 5-1. (For the Reporter/Jeremy Raines)

On a mission April 12-13, the Helena Huskies’ baseball team accomplished its goal in back-to-back matchups against area foe Chilton County.

Needing one win in the series to lock up a playoff spot, the Huskies not only did that but swept the Tigers to claim the 2022 Area Championship.

Helena capitalized on a combined 23 hits and 26 runs in the two games to down Chilton County 18-12 and 8-2 to claim the area title and advance to the postseason.

In the opening game of the final area series of the season, Helena used a wild start offensively to jump out to a quick lead.

Chilton County, however, was consistent and strong at the plate early as well, which led to a combined 26 hits and 30 runs between the two teams in an offensive battle.

The Tigers scored four runs in each of the first three innings, including a grand slam in the bottom of the first, but that still wasn’t enough to ever take the lead.

The Huskies added one more on a sac fly in the top of the second to take a 10-4 lead, before the Tigers responded with four more to cut the deficit to 10-8 in the bottom half.

Helena, however, put together another bulk of runs in the top of the third thanks to three singles, a double, three walks, an error and a sac fly leading to seven runs crossing the plate.

That put the Huskies on top 17-8, and while Chilton County put another four-spot on the board in the home half of the inning, the Tigers went scoreless over the final four innings of the game.

Helena added one more in the top of the fourth to close out an 18-12 victory.

Scott and Gibbs each finished with two hits and three RBIs to lead the way, while Turner, Mitchell and Tucker Bryan each had two hits and two RBIs. Storey, Mims and Alex Brown all contributed in big ways as well, picking up one hit and one RBI each.

On the mound, Austin Collins and Colby Thacker combined to give up five hits and six runs each, while both struck out two. Mitchell Rhodes then entered to finish off the final four innings and allowed no runs on three walks and two hits. Rhodes struck out two in that span.

With a playoff spot secured after that win, the Huskies turned their attention to clinching the area title a night later.

Through the first two innings, they faced some adversity after falling behind 1-0 in the top of the first, but that changed quickly in the bottom of the third.

Still trailing by a run, Storey gave the Huskies a spark with a one-out triple.

A walk to Turner and Mims getting hit by a pitch loaded the bases for Gibbs, who tied the game with an RBI single.

A sac fly from Logan Green then made it two outs, before Mitchell singled to set the stage for a two-RBI single from Scott that put Helena on top 4-1.

The Huskies then added two more an inning later on a two-RBI single from Green, while Chilton County never could find an offensive rhythm the rest of the way.

The Tigers brought home one more run in the fifth, but Helena polished off the championship win with a home run from Mims and an RBI single from Mitchell in the sixth to pick up the 8-2 victory.

Logan Barber was also key in the win, picking up a complete-game win on the mound. He struck out two and allowed two unearned runs on five hits and two walks.

At the plate, Green led the team with three RBIs on one hit, while Mitchell finished with two hits and one RBI. Storey also added two hits, while Scott and Mims each had a hit and RBI for the Huskies.

Helena finished area play 5-1 to claim the area title, sweeping both Calera and Chilton County, while the Huskies split their series with Pelham.

AHSAA approves change from areas to regions for baseball,…