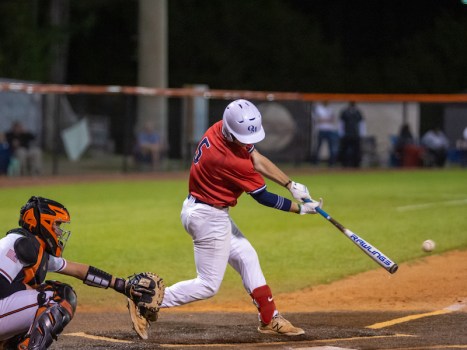 Oak Mountain evened its area record at 2-2 with a series sweep against Hoover in a top-10 battle. (For the Reporter/Larry Dancy) 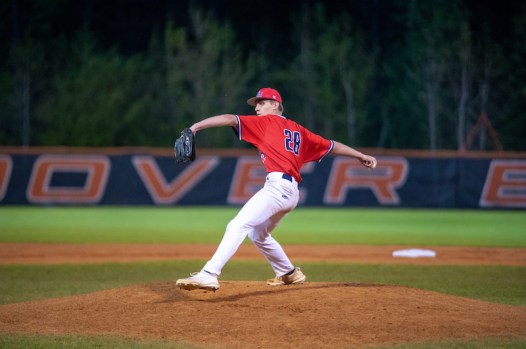 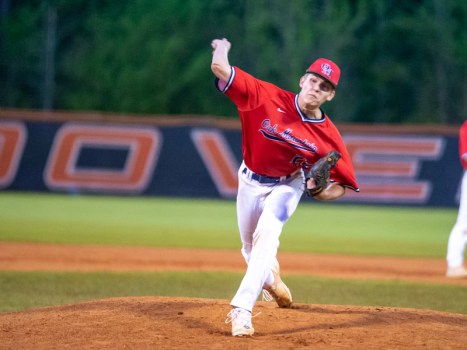 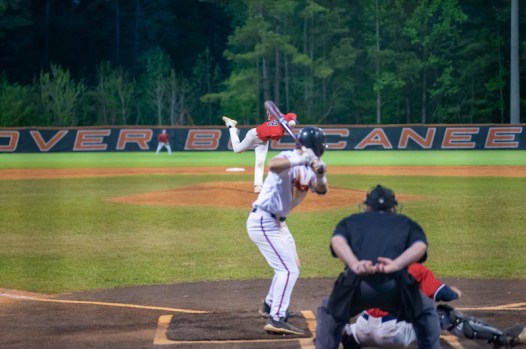 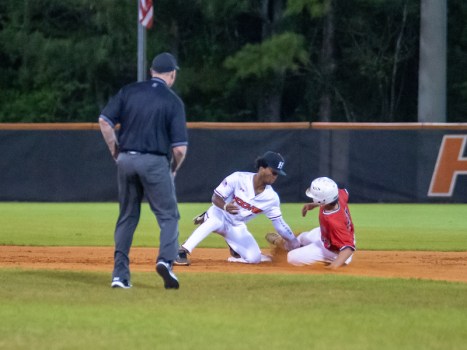 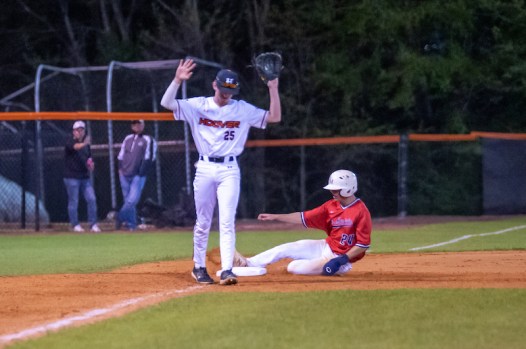 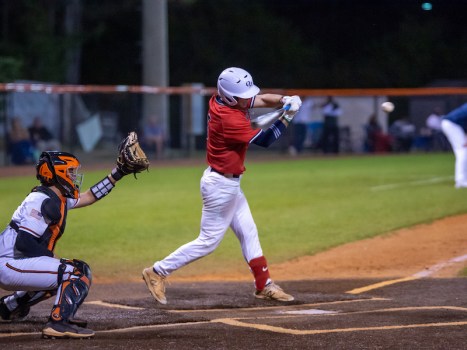 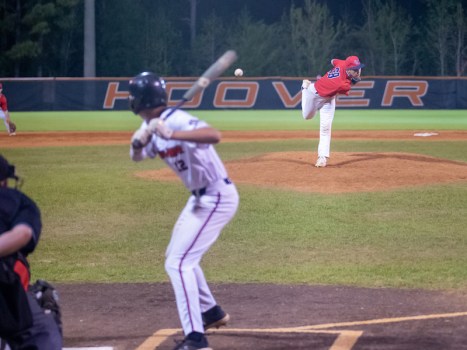 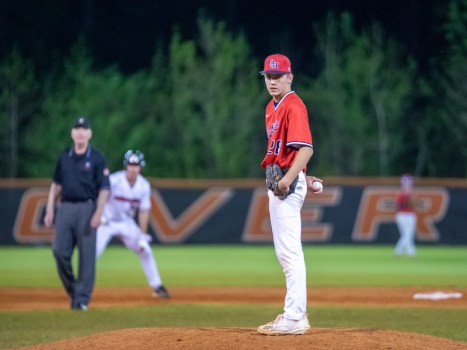 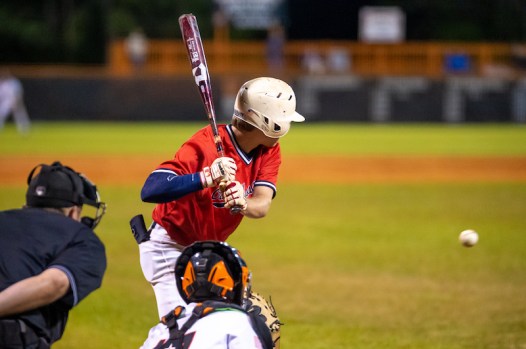 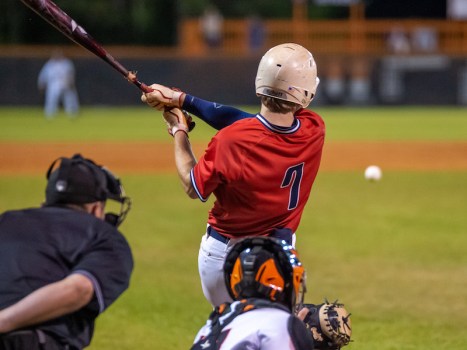 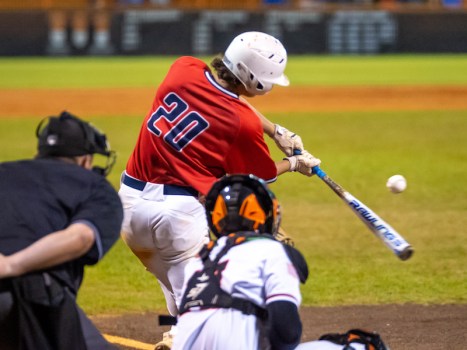 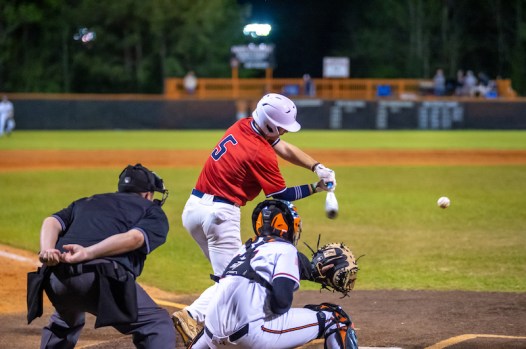 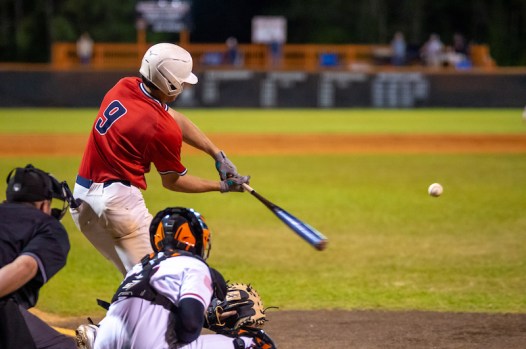 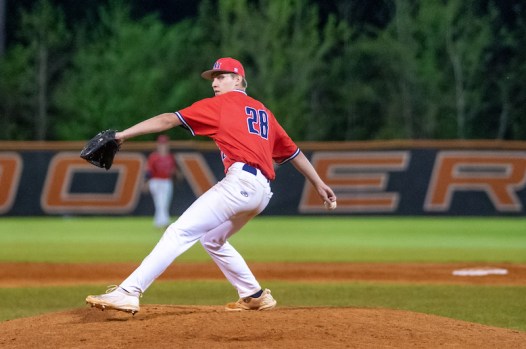 After getting swept by Thompson to open area play, the Oak Mountain Eagles faced a must-win area series in a top-10 battle with the Hoover Buccaneers Tuesday, April 12 and Thursday, April 14.

With Hoover entering area play at 2-0 off a sweep of Tuscaloosa County, the Eagles had to quickly shift from two heartbreaking one-run losses to the Warriors into complete determination to keep their postseason hopes alive.

And that’s exactly what they did.

With the two wins, Oak Mountain improved to 2-2 in area play, putting them in a tie with all three teams ahead of the final week of area play.

In the opening game against the Bucs, Oak Mountain fell behind 2-0 in the top of the first, but that deficit didn’t last long.

The Eagles responded quickly with three runs in the bottom of the first on a two-RBI single from Matthew Heiberger and an RBI fielder’s choice from Nick McCord.

From there, Oak Mountain never trailed the rest of the way.

That didn’t prevent the game from being a tight one, however, as the Buccaneers tied the game on an RBI double in the top of the third.

But Oak Mountain came right back with a sac fly from Heiberger in the bottom half to regain the lead.

In a back-and-forth affair, Hoover came back in the top of the fifth to tie it once again on a sac fly of its own, but Oak Mountain responded with the final blow in the bottom of the fifth.

A hit batter and a double from McCord put two aboard, before Kevin Jasinski and Chapman Wallock both hit fielder’s choice grounders that brought home one run each.

A double play ended the threat, but the damage was done, as the Eagles finished off the 6-4 win.

Heiberger led the way at the plate with one hit and three RBIs, while Taylor Bush, Maddox Macrory, Conner Moore and McCord all had hits in the win. McCord, Jasinski and Wallock each added an RBI.

On the mound, it was a team effort from Macrory, Jasinski, McCollum Mansfield and Davis Gillespie. Each pitched at least one inning. Mansfield and Gillespie finished off the final three innings by allowing no runs and one hit between the two of them, while Gillespie struck out four batters down the stretch.

In the second game, Oak Mountain was able to play from in front early.

Looking to pull off the sweep, the Eagles got a sac fly from Bush in the top of the first to take a 1-0 advantage.

They then added to that in the top of the third when Gillespie hit a two-run bomb to right field that put the Eagles on top 3-0.

Following a double from Bush and a pop out from Macrory, Heiberger continued an impressive series by driving home a third run in the inning with an RBI single.

Trailing 4-0, Hoover cut the deficit in half in the bottom of the fourth with two runs, but the pitching of Oak Mountain was too much from there.

The Eagles added an insurance run in the top of the seventh on an RBI single from Wallock, while Hoover was held scoreless the rest of the way.

Heiberger got the start on the mound and struck out three while giving up two runs on three hits and two walks. Macrory and Gillespie then polished off the game, allowing no hits, walks or runs and striking out six between the two of them.