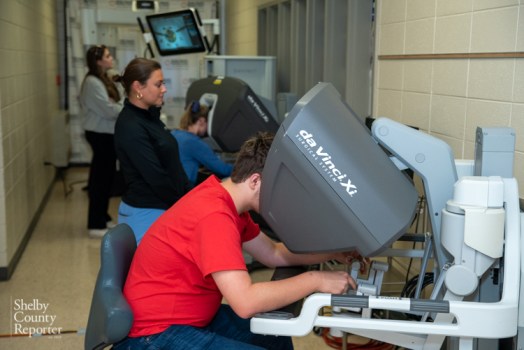 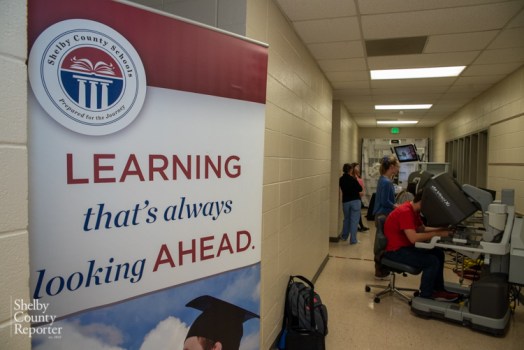 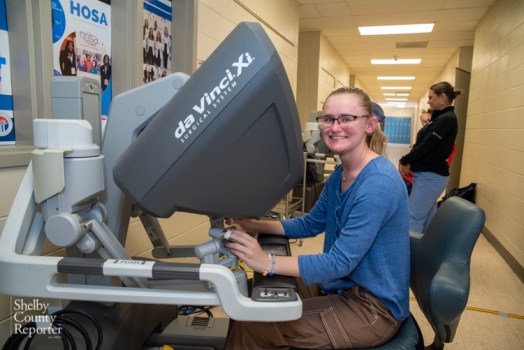 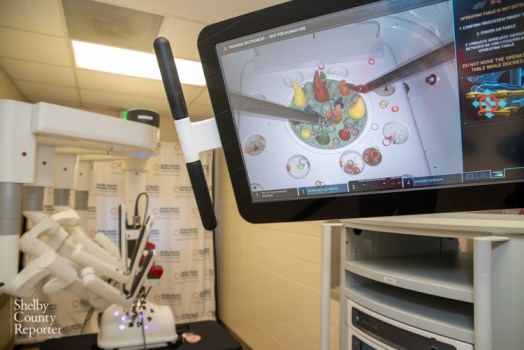 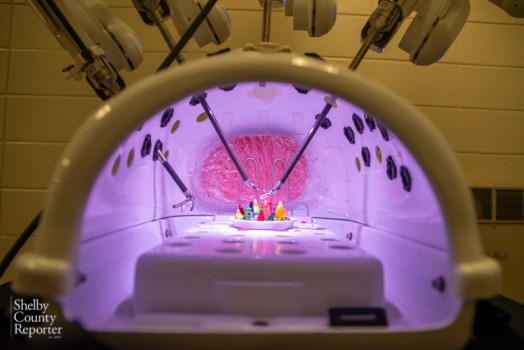 The Da Vinci robot in action. 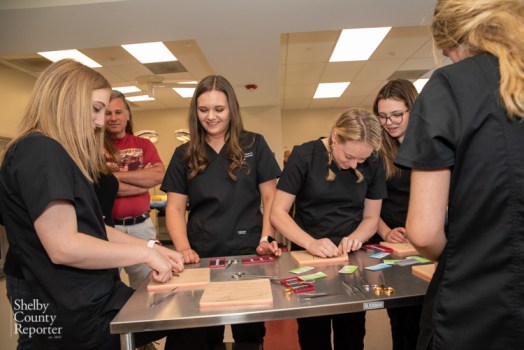 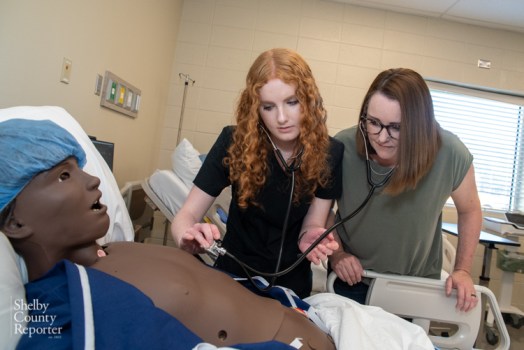 CHELSEA – Local students are gaining exposure to some of the most cutting-edge technology in modern healthcare.

On Thursday, April 14, Shelby Baptist Medical Center physicians and staff showed students and other visitors at Chelsea High School how to operate the Intuitive Da Vinci robotic-assisted surgical system, a device already familiar to students in the school’s Healthcare Academy.

“I’ve actually seen this robot in surgery,” CHHS senior Jessie Holsombeck said. “My first-ever surgery I watched was a prostate cancer removal with the Da Vinci robot. Being able to use the instruments that (the surgeon) uses in surgery is fascinating.”

“It gets people back to their normal activities in less time,” Braswell said. “It’s just great at Shelby Baptist Medical Center.”

“We’re training surgeons with the robot, and we work closely with OR staff,” Mitchell said. “It has revolutionized the world of surgery.”

Healthcare Academy students like Holsombeck and fellow senior Rylee Speed said having opportunities to work with the Da Vinci robot and other real medical equipment—both in their school’s surgical learning lab and in their internship rotations at Shelby Baptist Medical Center and Heart South Cardiovascular Group—has given them a better idea of what different careers would be like in the medical field.

“Getting to take this class and getting to put into practice everything I’ve seen in the books and everything we’ve talked about, it’s something that I could have never imagined,” Speed said. “Getting that patient interaction is something that you really can’t take for granted, and it’s been an amazing experience.”

Speed said she has wanted to be a doctor ever since she was a child, playing with a doctor kit.

After graduation, Speed will attend Xavier University of Louisiana. She is interested in pursuing a future career in pediatrics or obstetrics and gynecology.

“Getting to help people and also getting to see all of the cool stuff that medicine has to offer just drew me to it,” Speed said. “It really helps to have that real-life experience so we can connect it and really visualize it.”

During the first semester of the school year, Speed, Holsombeck and their Healthcare Academy classmates earned their Patient Care Technician certification.

The students are currently working toward their Certified Medical Assistant certification.

Holsombeck said being able to watch multiple surgeries during the internship rotations this semester has made her realize she wants to become a surgeon.

“I would never, ever have thought that I would want to be in the OR,” Holsombeck said. “Through exploration and actually standing in the OR and seeing a surgeon and what they’re doing, I have found out I love this, and I want to do it. It’s been the biggest blessing ever.”

Holsombeck said the surgeons have been especially accommodating to the students, letting them observe different procedures and talking to them about each one.

“They are always so kind, and they love to teach,” she said.

Fostering students’ interest in healthcare careers is gratifying for Braswell.

“It’s great to be able to do this for them,” Braswell said, “To jumpstart them into any healthcare career they want to go into, and as far as they want to go.”

Holsombeck plans to attend Lee University in Tennessee after graduation.

“Just having a program like this is amazing,” Healthcare Academy instructor Andrea Maddox said. “Just being able to take students from the foundational level and teach them the basic skills they need for any healthcare profession, that’s why industry partnerships like this are so important. It helps connect what we do in the classroom to the actual real-world experience and the potential careers they could have one day.”

On April 14, CHHS students watched demonstrations throughout the day, and then a community-wide open house was held from 4-6 p.m.

Maddox said the CHHS Healthcare Academy has experienced rapid growth since its formation in the fall of 2019.

Classroom upgrades and internships at Shelby Baptist Medical Center and Heart South have helped to carry the program forward and show students the variety of healthcare careers available in Shelby County.

“The basic skills that they learn here are foundational for any healthcare career,” Maddox said. “Being able to expose them both in the classroom and through internships helps them make those solid choices.”