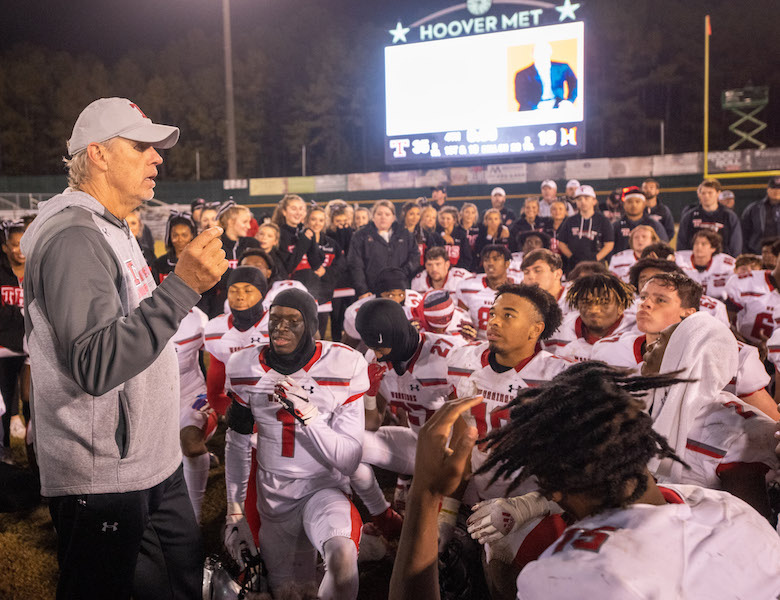 Thompson’s 2022 football schedule will feature state champions from Alabama, Georgia and Tennessee in addition to the normal Class 7A, Region 3 matchups. (File)

Coming off three consecutive seasons with no more than one loss, the Thompson Warriors will have their work cut out for them to keep that trend during the 2022 football season with a schedule featuring some of the top teams from around the country.

The Warriors, who have appeared in the last four Class 7A State Championships and won the last three, released their schedule for the 2022 season on Monday, April 18, and it features one defending in-state champion as well as two powerhouse out-of-state champions.

That’s all in addition to the regular challenges of Class 7A, Region 3, which has featured three nationally-ranked teams each of the last four years. 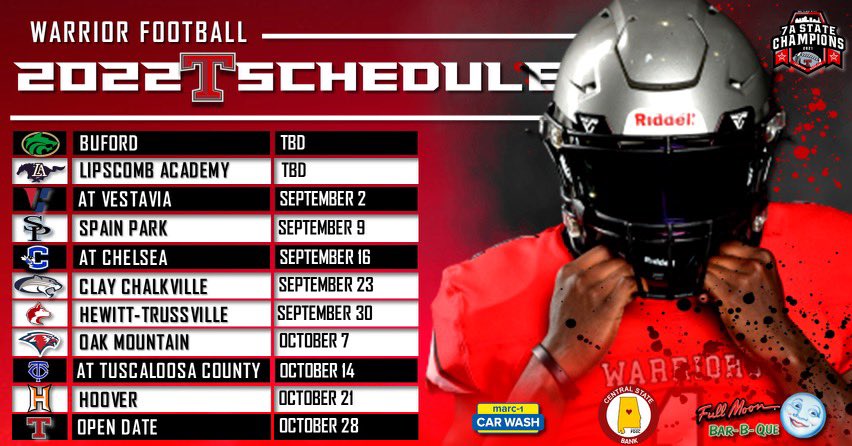 Thompson’s challenging trek will start with two games primed for the national stage, as the Warriors will take on defending Georgia State Champion Buford to open the season and defending Tennessee State Champion Lipscomb Academy during the second week of the season.

It is unclear the exact time and date of either game, as they’ll be considered for national broadcasts due to the magnitude of the matchups.

The opener itself will feature a matchup of two teams that have won three consecutive state championships when Thompson takes on Buford.

In Georgia, Buford, located Northwest of Atlanta, has won the last two 6A state titles, while the Wolves also won the 5A title in 2019. They have won 14 state championships all-time, including 10 since 2007 as a dynasty in Georgia.

Like Thompson, Buford has lost no more than one game each of the last three seasons, going a combined 41-3 in that span.

The Warriors have gone a combined 39-2 the last three years, setting up a showdown between two of the top schools between the bordering states.

It won’t get any less thrilling for Thompson in week two, as a battle with defending Tennessee State Champion Lipscomb Academy will be looming.

The Warriors will have more of a classification advantage against Lipscomb.

Based just outside of Nashville, the Mustangs are adjacent to the campus of Lipscomb University and are coming off a Tennessee Division II 2A title, which is the second largest private school classification in the state.

The Mustangs are coming off back-to-back championship game appearances with a win in last year’s title game 27-0 against Christ Presbyterian a year after losing the same game by seven points.

The only other out-of-classification and non-region game for the Warriors will come against an in-state opponent, but a challenging one at that with a battle against Clay-Chalkville on Friday, Sept. 23.

The Cougars are coming off a perfect season last year, going 15-0 en route to the Class 6A State Championship. They averaged 48.5 points per game and gave up 15.9 points per game during the magical run to the championship, scoring 40 or more in all but one game and giving up 21 or less in all but four games.

Clay-Chalkville has gone 74-14 the last five seasons under head coach Drew Gilmer, including no more than three losses in any season and a 15-4 mark in the postseason with trips to at least the third round of the Class 6A playoffs each year.

Since 2014, the Cougars have appeared in three championship games, winning two, and made it to at least the semifinals five times.

As if that wasn’t challenging enough, Thompson will have a difficult path to another region championship as well.

The Warriors will open region play against three head coaches new to the 7A classification and Region 3.

Thompson’s region opener will come on Friday, Sept. 2 against Vestavia Hills and new head coach Robert Evans, who is the former defensive coordinator at Mountain Brook.

The Rebels went 4-6 a season ago and lost to Thompson 49-7, which was the team’s worst loss of the season.

Thompson will then have its region home opener a week later against Spain Park on Friday, Sept. 9.

The Jags will be under new head coach Tim Vakakes, who comes to Spain Park from Jackson-Olin, where he built a program for the last nine years.

Thompson won last year’s game 49-3, as the Warriors gave up their first three points of the season in the win, before giving up nine or less in their first nine games.

The Warriors will then hit the road for a county showdown with new 7A foe Chelsea.

The Hornets will be playing their first-ever season in Class 7A next year after reclassification bumped them up from 6A.

Coming off a 4-7 season and a playoff berth last year, Chelsea will also be under a new head coach, who is expected to be announced in the coming days.

Following a matchup with Clay-Chalkville at home the next week, the Warriors will jump back into region play with two more home games against Hewitt-Trussville and Oak Mountain.

Thompson will matchup with Hewitt on Friday, Sept. 30 after winning last year’s matchup 42-9, before then squaring off with the Eagles on Friday, Oct. 7.

The Warriors beat Oak Mountain 48-0 and 45-7 during the regular season and postseason a year ago.

That will lead into a road region battle with Tuscaloosa County on Friday, Oct. 14. Thompson won that game 58-0 last year and has scored 35 or more in each of the last five matchups, while the Warriors have given up 22 or less in each.

Then comes the showdown with Hoover on Friday, Oct. 21.

Thompson will host the Buccaneers in what has become one of the biggest rivalries in the country the last several years.

The two teams have met in the last five Class 7A semifinal games, while the Warriors have gone from not beating the Bucs to winning seven of the last 10 matchups.

Last year, Hoover won the regular-season game 24-21, while Thompson won 35-10 in the postseason to earn a spot back in the state championship game for the fourth year in a row.

Thompson’s lone bye week of the season will come a week later, as the Warriors will look to get a week of rest before another hopeful playoff run to a fourth consecutive championship.