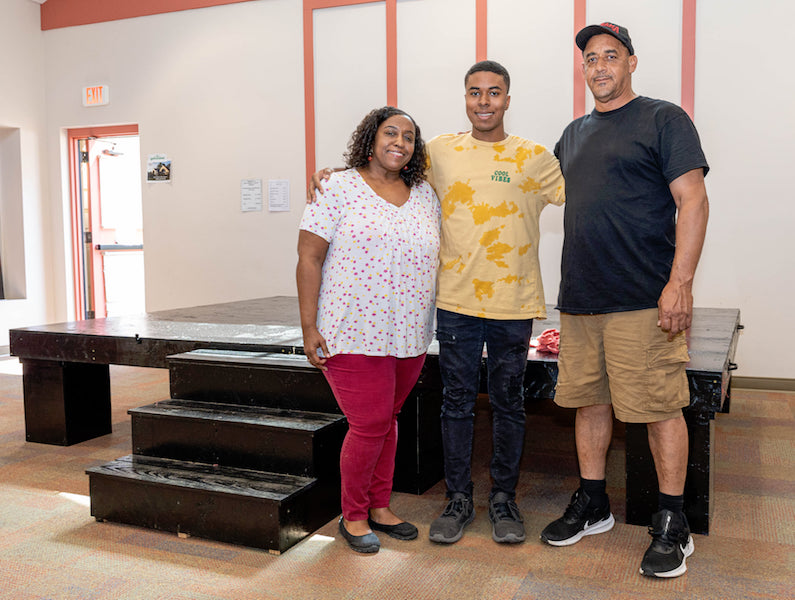 ALABASTER – For Alabaster teenager Carter James, the local library has served as a place to research and cultivate passions and talents over the years.

“The Albert L. Scott Library has always been a second home to me,” Carter said. “I spent countless summers participating in programs for their summer reading program, and I have always wanted to give back to them for everything they have done for me.”

During his spring break, Carter completed his Eagle Scout project for Boy Scout Troop 20, where he spent about 40 hours over the course of seven days to complete a made-from-scratch stage for the library’s Nan Abbott Room.

“Back in January, I approached Ms. Frances Smith, who is over the Children’s Library, about the possibility of building a stage for the Summer Reading Program,” Carter said. “I know that the library always has guests performing throughout the summer, so having a stage would give guests a designated place for them to perform or present.”

The rank of Eagle Scout is the highest achievement possible in the Boy Scouts program. Carter’s mom, Cheryl James, said her son began planning his project in January after initially discussing his Eagle Scout project in the fall of 2021.

“We both agreed he had to do something for the library, a place where he had grown up and developed through their many children and teen programs,” Cheryl James said. “We first discussed an outdoor theater with a stage. So, when he reached out to Frances Smith, the Children’s Services Librarian, she was very pleased that he wanted to do something for them. She suggested an indoor stage instead that could be collapsed, rolled and stored. So, Carter took up the challenge.”

Cheryl said she was amazed at how her son thoughtfully planned out his project and the dedication and perseverance he had to see the project through from start to finish.

“The build phase was especially taxing on him, as he spent his entire spring break working on the project with limited help,” Cheryl said. “Most of his friends and fellow scouts were away enjoying the break. I am so proud of Carter for working hard and completing his Eagle project. He planned it, made proposals, sought and received the funding from the library, shopped for materials, and put in the labor. He even checked out of school early to personally deliver the stage.”

Carter said the most enjoyable part of the project was building the stage after cutting the wood to the exact measurements.

“Building was a learning experience for me as I have more experience with technology,” Carter said. “What made it even more enjoyable was seeing the concept I had in my head three months ago become a reality. I was always intimidated by previous Eagle Scout projects that I helped work on in the past, so actually seeing my project coming to fruition was cathartic.”

Scouts has been a part of Carter’s life ever since joining the organization as a Tiger Cub.

“It has always been my goal to become an Eagle Scout,” Carter said. “Finishing the project was a top priority for me. Nothing else mattered to me except for finishing the project. Now finished with the project, I feel I have proven myself to my troop leaders, community, and most importantly myself.”

Cheryl said she is thankful to the library that helped shape her son into the man he is today.

“Carter’s engagement with the Albert L. Scott Library began when he was only a year old,” Cheryl said. “He would attend Toddler Tales where he interacted with other toddlers and listened to stories being read. He stayed involved in the children’s programming throughout his childhood and even into his teen and high school years. He loves to perform.”

Carter took acting classes every summer at the library from ages 8 to 15, and was awarded a scholarship from the library to attend the Alabama Shakespeare Festival, twice, at ages 9 and 11.

As a result of his involvement with acting, Carter is still involved in theater at Thompson High School and will perform in their upcoming musical “The Little Mermaid” later this month.

Carter has plans to attend the University of Montevallo in the fall and major in theater and minor in film production.