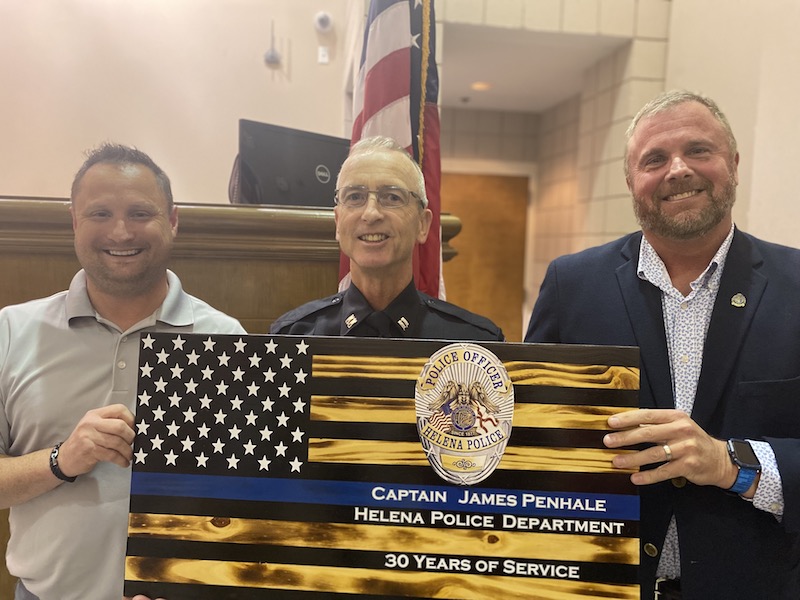 The city of Helena held a special celebration event honoring the career and retirement of Captain James ‘Ivy’ Penhale on Thursday, April 14. Chief Brad Flynn, Mayor Brian Puckett and Penhale’s colleagues through the years spoke to Penhale’s integrity and character as they bid him good luck in his retirement. (Reporter Photo/Michelle Love)

HELENA – It was a bittersweet day for many members of the Helena community on Thursday, April 14, as Helena Police Captain James “Ivy” Penhale officially retired from the city’s police department.

Several of Penhale’s friends, his family and his colleagues through the years were in attendance at City Hall where cake and refreshments were served, while Chief Brad Flynn and other colleagues shared their thanks and farewells.

“This is a bittersweet day for a lot of us,” Flynn said to the crowd. “We hate seeing him leave, but I can’t think of a better way to send him off than with all of his friends and coworkers that he’s had over the years to wish him farewell.”

Penhale’s career spans over 30 years of service, eight of which were spent as a chief for the K9 Unit.

Mayor Brian Puckett thanked Penhale for his many years of service protecting the citizens of Helena.

“I think it was about three months after I took office that I actually learned his name because everyone always referred to him as ‘Captain,’” Puckett joked. “Everything that you did for all of your career, but especially the past year and a half, it’s just been tremendous. Every task that was put on you, you accomplished and did with perfection. I wish you nothing but the best in your retirement.”

Lieutenant Josh Lindsey said he has known Penhale since he was 16 years old, meeting Penhale when he was still a sergeant. He went on to say through the years Penhale has been a friend, father-figure and mentor to Lindsey.

“I’m really sad to see him go, to be honest,” Lindsey said. “I just hope I can live up to his standards going forward in my career. I hope one day I can stand here and have the kind of career he had.”

Lieutenant Charles Hudson, a person described by his colleagues as being a man of few words, even offered his sentiments to Penhale.

“We’ve had a few bad times together, but a lot more good times together,” Hudson said. “I’m glad to see him get to retire. A lot of people don’t make it that far because they go off to other careers or do other things.”

Lieutenant Brandon Harrelson with the Montevallo Police Department recognized the tremendous impact Penhale’s career has had on not just the Helena Police Department, but law enforcement individuals throughout Shelby County.

“There are so many officers and explorers and firemen and people all over Shelby County that work hard for their community every day that owe a part of that to him and his dedication to the city of Helena,” he said. “I love him like a brother, like a dad, he’s always been there for me even after moving to another agency.”

Flynn took the floor again to offer more heartfelt sentiments to Penhale, saying that Penhale has been there for him every step of his career and is the “definition of integrity, character and family.”

“Brandon put it well that I don’t think any of us can really encompass the impact he has had on not just us, but the community and so many other police officers and people in this county,” Flynn said. “When you think of Helena you think of the Penhales and the legacy that they leave behind. This man, there is no brighter or shinier legacy that I think is going to be left at the Helena Police Department than what he’s leaving today.”

Flynn presented Penhale with a special wooden plaque commemorating his years of service as well as a personalized Kimber .45 gun with “30 Years of Service to the City of Helena,” the Helena Police badge and Penhale’s name engraved on its sides.

“This is more than I have words for,” Penhale said. “Thank you to everyone here. This is just awesome. Most of you know I don’t talk a lot, I don’t have a lot to say unless it’s got to be said, but if I was going to work anywhere, it would be the city of Helena. Helena has such a great atmosphere with its families, the people who care, the dedication of the people in this city. It’s not the biggest, it’s not the brightest, but it is the best…I’m just so proud to have worked here.”