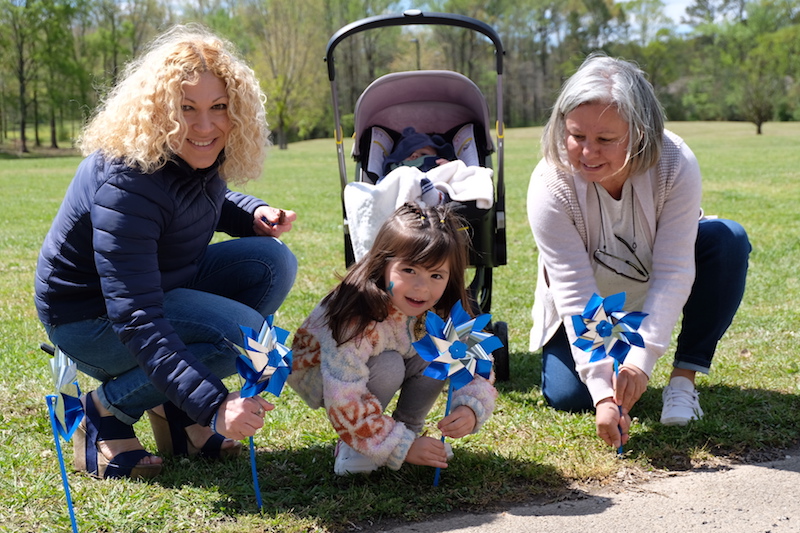 ALABASTER – A Pinwheels for Prevention event to help bring awareness of child abuse was held on April 9 at Veterans Park in Alabaster.

The free event, from 10 a.m. until noon, featured resources and information on ways to prevent child abuse.

“The event was a success on Saturday, and I enjoyed seeing all of the smiling faces and blue pinwheels spinning in the wind to bring awareness to child abuse,” said Rachelle Graham, who is the coordinator for the Shelby County Children’s Policy Council. “Thanks to Jo Davis with CHIPS of Alabama for bringing kites for the children to play with on the windy day. This captures the true spirit of child abuse prevention as we envision a world where all children can play with carefree happiness.”

Some of the speakers at the event included Kim Mashego, Kennth Paschal, Jody Tallie, Richard Fallin and Ward Williams.

The city of Alabaster’s Park and Recreation Department lent the space for the event, and the members of the Parent Involvement Committee helped with ideas for the day’s events.

Graham said this is the first year the Children’s Policy Council, which is led by Juvenile Judge Jim Kramber, has hosted an event in honor of Child Abuse Awareness Month, which is something that is nationally celebrated every April.

The blue pinwheels are a nationally-recognized symbol, which connotes the playfulness and joy that is desired for every child to experience.

“The cyclical nature of the pinwheel is representative of the cycles of love and support we hope to create in all families,” Graham said. “In addition to bringing awareness to the issue of child abuse, we hope to honor the agencies in Shelby County who work tirelessly to serve children and families affected by trauma.”

Mashego, the director of Shelby County DHR, spoke to the crowd about the reports of abuse and neglect that are received in their office each year and the importance of speaking up if you suspect an abusive situation is occurring.

Graham said they also hope to support Owen’s House, the local Children’s Advocacy Center, which serves more than 200 children annually by conducting forensic interviews and providing counseling for children who have experienced abuse.

The event was followed by the Blue Ribbon BBQ fundraiser for Owens House at Siluria Brewing from noon until 4 p.m. on Saturday.

“The best part of the day was seeing families who were out together for a day at the park,” Graham said. “We know that life brings many stressors, which can lead to abuse. We were glad to have the opportunity to get out the reminder that children need love and security, and to encourage families to engage resources and support before problems escalate.”