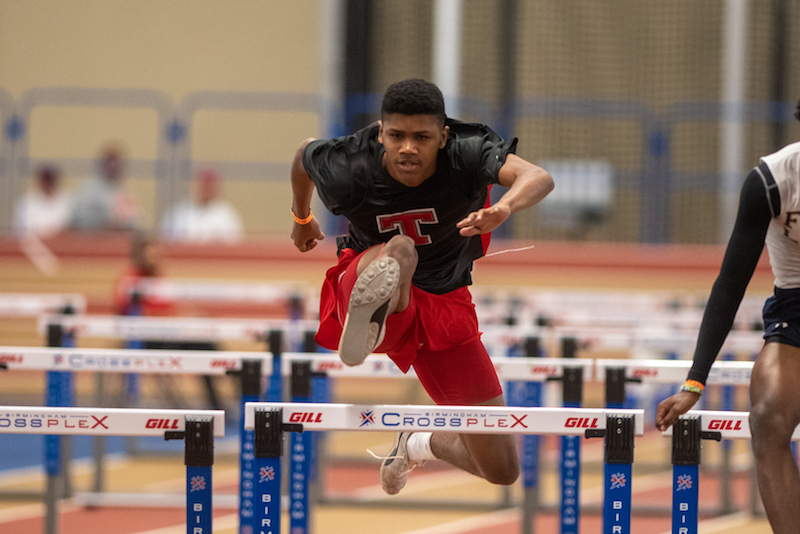 Bradley Franklin was one of several winners at this year's Mountain Brook Invitational. (Reporter photo/Keith McCoy)

MOUNTAIN BROOK – It was another busy event for local track and field athletes at the 2022 Mountain Brook Invitational April 15-16 at Mountain Brook High School, as schools from Shelby County accounted for 61 top-10 finishes at the event.

The Pelham Panthers continued what has been a special season with 12 different top 10 finishers, which matched the high number for local teams.

The Panthers not only had 12 finish inside the top 10, but also had one winner in the javelin throw.

Elizabeth Hayhurst set a new personal record at 126 feet to pick up her fourth win of the season and fifth top-three finish in as many events.

She was the highlight for the girls, but Jadin Lykes and Jordan Williams also had top 10 finishes. Lykes finished seventh in the triple jump with a distance of 33 feet, 8 inches, while Williams finished eighth in the 100-meter dash behind a time of 13.25 seconds.

The girls’ 4X100-meter relay team added a finish of seventh for the Panthers, finishing the race with a time of 50.44 seconds.

The Pelham boys also had a strong showing at the event with nine top 10 finishes, including several inside the top five.

Caleb Newell earned a podium finish for the Panthers as well, claiming third in the shot put with a distance of 49 feet, 3 inches.

Newell also had multiple top five finishes after he took home fifth in the discus throw with a distance of 138 feet, 3 inches.

Gabe Gamble added a top-five finish for Pelham in the triple jump, as the senior totaled 44 feet, 8.5 inches to finish in fourth.

The Oak Mountain Eagles didn’t have a winner on the day, but like Thompson and Pelham, they did match the best presence inside the top 10 with 12 top 10 finishers throughout the event.

Mitch Allen and Ethan Hammett highlighted the performance thanks to finishes of second between three different events.

Walker Hughes also grabbed a podium finish in the javelin throw. He totaled 160 feet, 2 inches for a third-place throw for the Eagles.

Devan Moss finished inside the top five as well, finishing fifth in the 100-meter dash thanks to a speedy time of 11.28 seconds.

Jack Stanfield and Wesley Yeatman also added a top 10 finishes for the boys. Stanfield claimed eighth in the shot put after reaching a distance of 45 feet, while Yeatman finished seventh in the 400-meter dash behind a time of 50.51 seconds.

As for the girls, Julia Bueche was the highest individual finisher. She finished sixth in the 300-meter hurdles thanks to a time of 48.86 seconds.

The Thompson Warriors also had an impressive outing at the event with 11 finishers inside the top 10, including nine of those 11 inside the top five.

Bradley Franklin was the highlight of the day for the Warriors thanks to a win in the 110-meter hurdles. He took home the top spot in the event after finishing with a time of 14.78 seconds.

He then followed that up with a finish of second in the 300-meter hurdles, finishing the event with a time of 38.82 seconds, which marked a new personal record.

Franklin has finished inside the top two of each meet for those two events this season.

Thompson got two more podium finishers from Chris Sims and Eli Sutton. Sutton finished third in the triple jump with a distance of 44 feet, 9.5 inches, while Sims finished third in pole vaulting after clearing 14 feet, 6 inches.

Gavin Horton finished just behind Sims in the event, claiming fourth after clearing the same height.

Jackson Hamlin put together another top-10 finish for the Warriors in the 2-mile run. He finished sixth with a time of 9:35.31.

For the girls, Akasha Dudley and Whitney Clark both finished inside the top 10, including two podium finishes.

Dudley claimed second in the shot put behind a distance of 36 feet, 11 inches, while she also finished fourth in the discus throw thanks to a distance of 99 feet, 3 inches.

Clark claimed third on the podium in the javelin throw, finishing with a distance of 113 feet, 6.5 inches.

Trinity Williams also cracked the top 10 for the Warriors, claiming seventh in the 100-meter hurdles behind a time of 15.94 seconds.

Brooklynn Kirksey continued a remarkable season by accounting for three of those top five finishes, including a win in the long jump.

She totaled 18 feet, 7.5 inches to claim the top spot in the long jump event, which set a new personal record.

She also set a new personal record in the 200-meter dash with a time of 25.50 seconds, which was good enough for fifth, while she claimed fourth in the 100-meter dash behind a time of 12.43.

In the long jump, she finished just ahead of teammate Lamaria Bennett, who finished the event in third after a distance of 17 feet, 4 inches.

Joel Logan finished inside the top five for the boys, claiming fifth in the high jump after clearing 6 feet, while Walter Womack finished eighth in the long jump thanks to a distance of 20 feet, 2.75 inches.

The Calera Eagles were once again led by their two stars in the event, as Braylyn Farrington and Jordon Bray both finished inside the top five of their respective events.

Farrington set a new personal record en route to winning the 400-meter dash. The junior finished with a speedy time of 47.40 seconds to, which beat his previous best time in the event by more close to a second.

It also marked his first 400-meter win of the season after finishing second in his other three events this season.

Farrington also added a finish of fourth in the 200-meter dash behind a time of 22.36 seconds, giving him back-to-back top five finishes in the 200 after winning the Spain Park Classic with a time of 21.99 seconds a week earlier.

Bray, who competed for the girls in the 400-meter dash, also had a strong showing. After winning her prelim race with a personal-record time of 56.46 seconds, she finished fourth in the finals with a time of 57.98 seconds. She has now finished inside the top five in all six 400-meter race she has run this season.

The Chelsea Hornets were highlighted by Cady McPhail and Miles Brush in the distance runs.

Both state champions in the past, each finished inside the top 10 of multiple events at the Mountain Brook Invitational.

McPhail led the way by finishing second in the 800-meter run finals behind a time of 2:12.87, while she also added a finish of seventh in the 1-mile run. She finished that event with a time of 5:10.46.

Brush also added a podium finish for the Hornets in the 2-mile run, finishing third with a time of 9:16.11, while he also finished seventh in the 1-mile run with a time of 4:43.86.

The Hornets also got top 10 finishes from Nia Cummings in the triple jump and Jadlyn Debardlabon in the long jump.

The Spain Park Jaguars had eight different finishes inside the top 10, including a strong day from Delaney Vickers.

Mackenzie Culpepper also continued a strong season, finishing fifth in the 1-mile run with a time of 5:05.11.

Spain Park’s boys were led by John Landers, who finished fifth in pole vaulting after clearing a height of 14 feet, while the 4X100-meter and 4X800-meter relay teams both finished sixth.

Elise Picard competed in the event for Indian Springs and was able to finish inside the top 1- in the 2-mile run. She finished ninth after finishing the race with a time of 11:54.61.