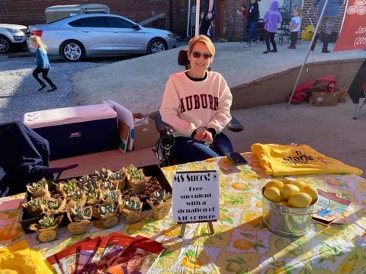 The Presenting Sponsor for May’s event is Sav Mor Food Outlet, and the tournament is produced by Killin’ Time Cornhole. Registration is open now for social and competitive division cornhole teams.

All the proceeds from the tournament will go directly to benefit the National Multiple Sclerosis Society. Contestants should download SCOREHOLIO in the App Store and select the Killin’ Time Cornhole MS Fundraiser to register.

Ann Davis, a longtime Calera resident and wife of Bill Davis of Sav Mor Food Outlet has been involved with the MS Society for many years now. Ann struggled for several years before finally being properly diagnosed with MS in 2010 after many doctors, tests and misdiagnoses.

Bill and Ann have been active fundraisers through the MS Walk and other local events for National MS Society. Last year, Ann coordinated with Calera Main Street merchant, Plant, to give away succulents with a donation to “MS Succs!”

“The National Multiple Sclerosis Society exists because there are people like me with MS,” Ann said. “Their vision is one I can get behind – a world free of MS. Everything they do is focused so that people affected by MS can live their best lives as we stop MS in its tracks, restore what has been lost and end MS forever.”

Austin Castleberry of Killin’ Time Cornhole said, “We are honored to help with Calera’s First Annual Cornhole Tournament, especially to support such a worthy cause. We will set up 14 courts and feature two brackets – one for competitive teams and one for social teams. We’re looking forward to starting this tradition in Calera.”

Calera’s First Friday is held for the entire community and promotes the revitalization efforts of the historic district and its downtown merchants, while providing unique products, entertainment and offerings for the people of Calera and Shelby County.

The festival invites a variety of artists, designers, makers and local producers. The festival series features live music, performances, a kid’s zone, popular food trucks and other sponsored activities with a different theme each month.

The Downtown Calera event will take place on the first Friday of every month through August. The event is held from 5-8 p.m. in the Calera Courtyard, 1120 17th Avenue, behind the shops in the historic downtown district.

Those interested in being part of any future First Friday event, email events@downtowncalera.org for more information.