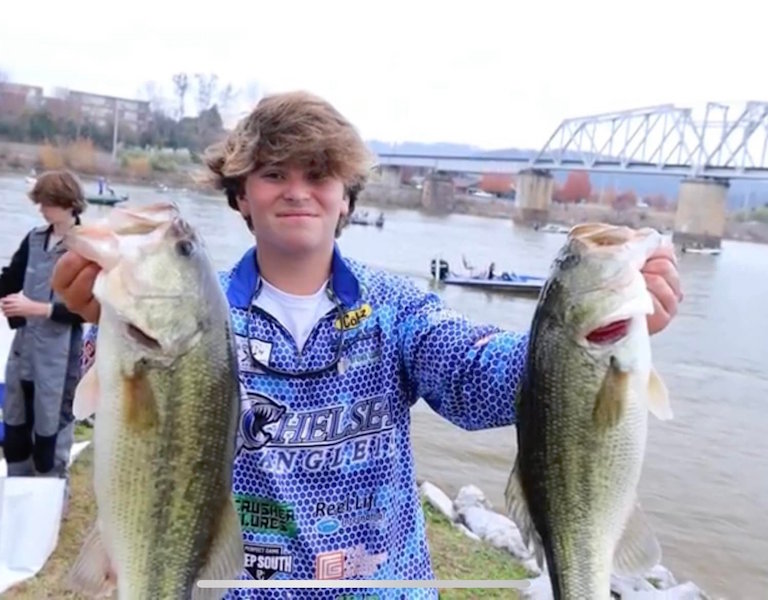 Chelsea angler Braxton Hopper has been named a Bassmaster All-American as one of the 12 best high school anglers in the country. (Contributed)

BIRMINGHAM – One local angler received one of the biggest honors in high school fishing on Wednesday, April 20, when he was named to the Bassmaster High School All-American Team.

One of 12 members to be selected to the team, Chelsea High School senior Braxton Hopper earned a spot on this year’s list thanks to six tournament wins during the 2021 season.

One of his biggest accomplishments came at the 2021 King of the Coosa.

Hopper totaled a perfect 900 points by winning three of the four events, which has never been accomplished before in the history of the tournament. With that effort, he claimed the title at the event.

“[King of the Coosa] is a coveted title for a number of reasons,” said Curtis Gossett,  tournament director and District 3 director for the Alabama Student Angler Bass Fishing Association. “First, it is a solo trail. So, it is advantageous to fish alone. However, Braxton always brings a younger angler in the boat with him to teach them how to become winners and leaders in the future. This is just one way he leads.”

Outside of tournaments, Hopper mentors junior anglers by taking them on the water and helping them develop skills with bait selection, casting and knot tying.

He is also fully trained in fish care and handling and has put those skills to use volunteering at multiple B.A.S.S. tournaments. Hopper plans on fishing at the collegiate level and one day wants to compete at the professional level.

“For eight years, the Bassmaster High School All-American program has identified and honored some of the most accomplished student athletes in the country,” B.A.S.S. CEO Chase Anderson said. “We’ve seen past members go on to decorated college fishing careers, compete in the iconic Bassmaster Classic and begin promising careers in the fishing industry. This group of 12 outstanding All-Americans is equally as talented and poised to do amazing things. We appreciate Academy Sports + Outdoors for partnering with B.A.S.S. to recognize these athletes’ fishing skills and commitment to academics, conservation and community service.”

Nearly 400 applications nominating students in grades 10-12 were submitted from 34 states across the nation. Of these, 53 students were chosen as Bassmaster All-State anglers.

After considering tournament résumés, conservation efforts, community service activities and recommendations from school officials and coaches, a panel of judges consisting of representatives from the sportfishing industry, media and conservation groups further narrowed the field to the top 12 high school anglers in the country.

“Congratulations! This goes to show your efforts on and off the water do not go unnoticed,” said Glenn Cale, B.A.S.S. Nation Tournament Manager — College, High School and Junior, to the student anglers. “I’m superproud of you all and look forward to sharing this special moment with you. Be sure to chase all of your dreams, because they do not chase you back.”

The 2022 All-American team has been invited to participate in an exclusive Bassmaster High School All-American Tournament, which will be held in conjunction with the 2022 Simms Bassmaster Elite at Lake Fork, scheduled to take place May 19-22 in Quitman, Texas. Each All-American angler will be paired with an Elite Series pro for the one-day derby to be held on a nearby fishery.

Azaleas, a new brunch restaurant in Alabaster, is now…