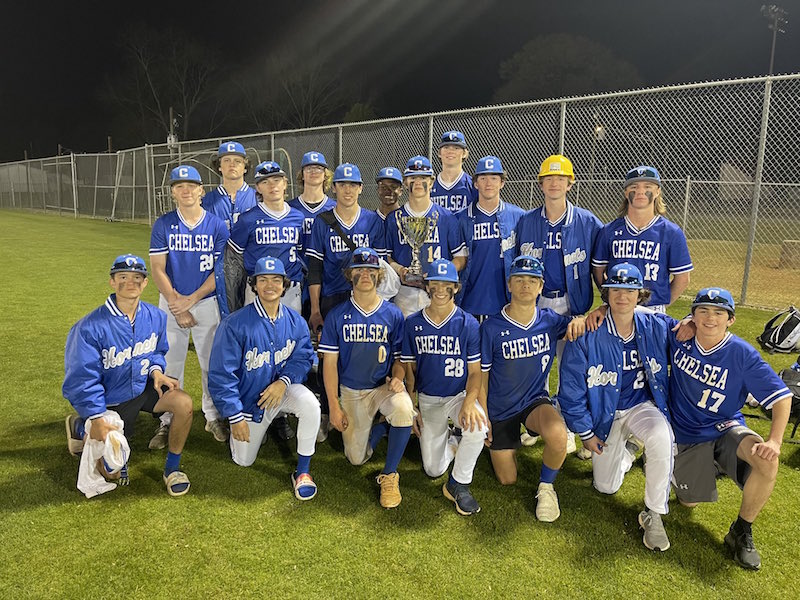 CHELSEA – The Chelsea freshman baseball team recently capped off a special 2022 season on Friday April 8, sweeping the Oak Mountain Eagles to close out the year with a 25-3 record.

Two of Chelsea’s losses came to the Spartans in 3-2 games, while the other came to Hoover in a 13-9 matchup.

“Coachable and competitive are two words I would use to describe this year’s team,” freshman coach Kyle Caldwell said a day before being hired as Elmore County’s next football coach. “It didn’t matter who was on the mound or at the plate, they wanted to win every at bat and every pitch, and that’s what made the difference.”

Caldwell said he was most proud of the focus and attention by which the team came to the field with every day of the season.

“They had a great energy every game, and for everyone who has ever coached freshman baseball, they know how difficult it is to get teenagers to concentrate on baseball,” he said. “But these kids love the game and play it the right way, and their record shows. It was a joy to watch them compete and win a lot of games this year.”

With that focus, Chelsea was able to put together the special season, which also included winning a challenging spring break tournament at Thompson, beating Mountain Brook 2-0, Vestavia Hills 8-6, Hillcrest Tuscaloosa 5-1, Hoover 9-5 and Thompson 7-2 in the championship game.

Some of the top pitcher performances for the year were Thomas Hopkins with a record of 4-0 and an ERA of 2.4. He also finished the season with one no-hitter.

Paxton Stallings also threw a no hitter with a record of 4-1 and an ERA of 2.2. The most wins on the year went to Aiden Hughes, who also finished with a perfect 6-0 record, while Brody Sanders finished 4-1 to give the Hornets four pitchers with at least four wins.

Brett Hackett who led the team at the plate with a batting average of .371 that included 21 singles and 28 RBIs.

Mack Breazeale put together 1.159 OPS, which led the Hornets. Leading the team in doubles with 10 was Stallings and not far behind were Jay Chapman with six and Hughes with seven.

Cade Mims tied for team lead in hits, recording 26 for the year.

Top defensive performers for the year included Chase Lackey with a 1000% fielding percentage on 58 total chances.