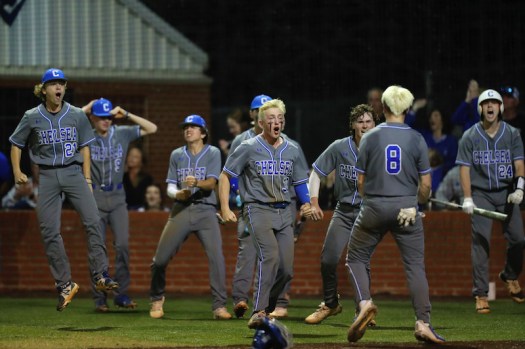 Chelsea’s Walker Thomas celebrates with teammates during Chelsea’s second win against Arab on Friday, April 22. He finished 4-for-5 with four doubles and three RBIs in the comeback win to help the Hornets come back for a sweep. (For the Reporter/Cari Dean) 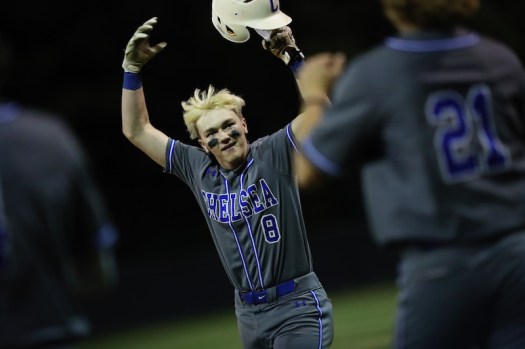 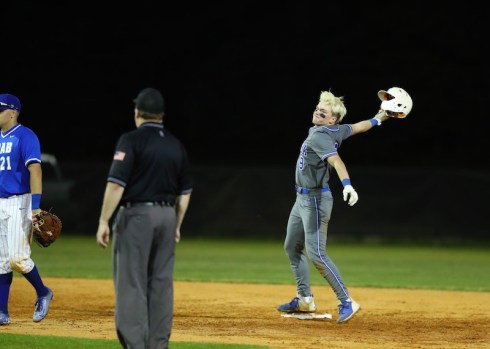 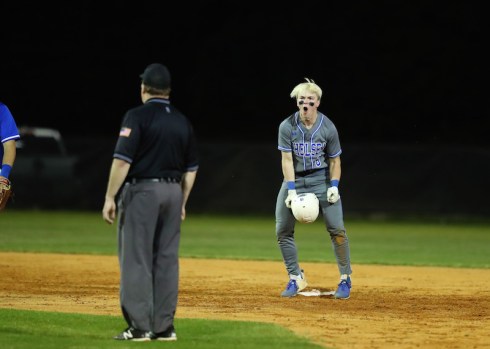 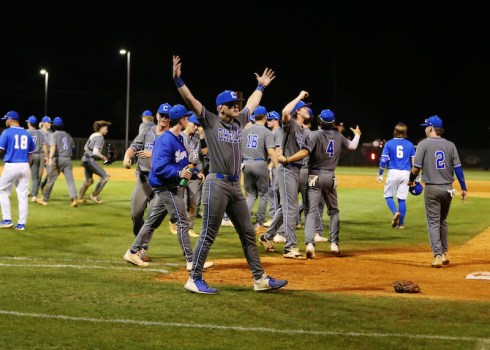 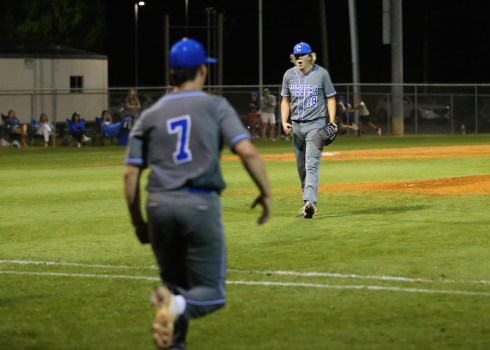 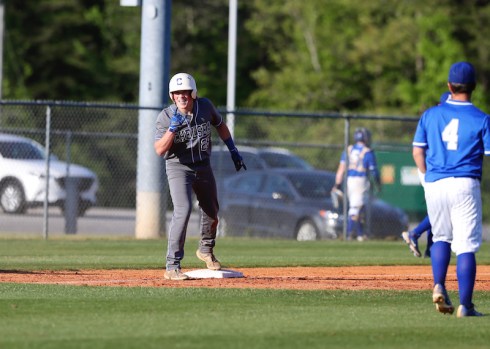 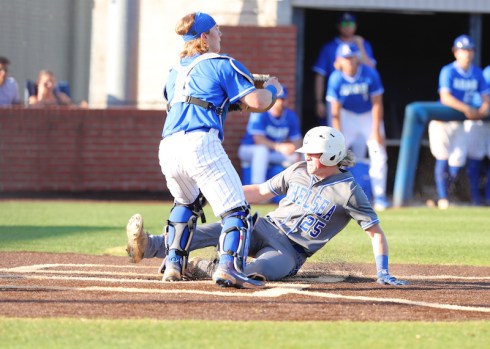 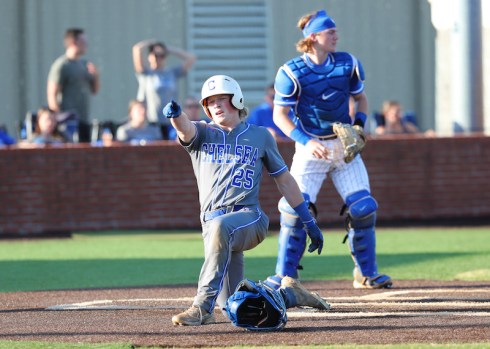 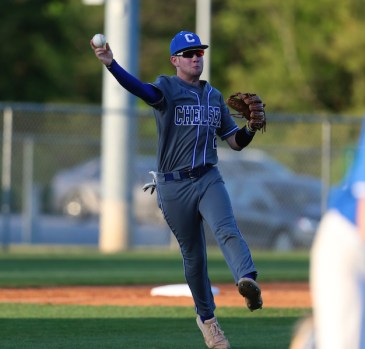 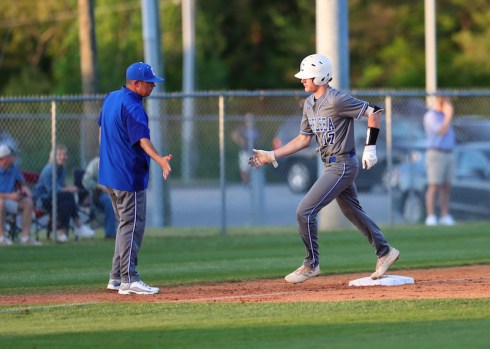 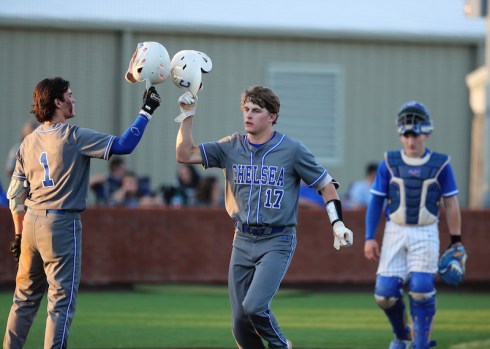 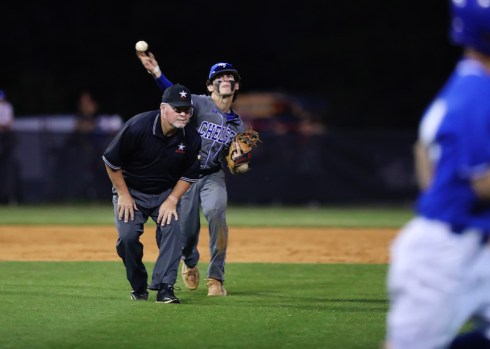 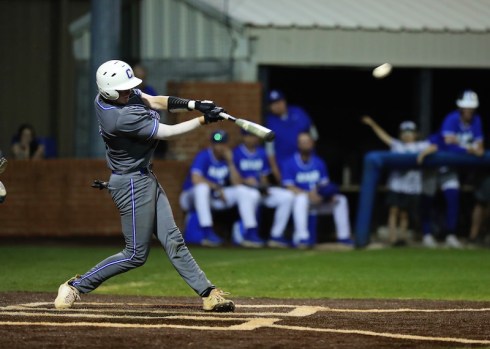 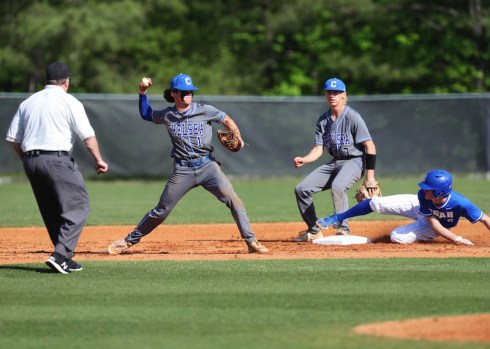 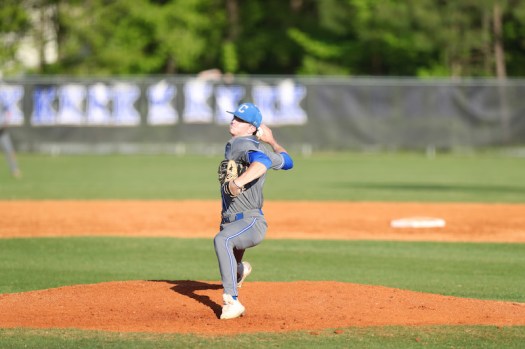 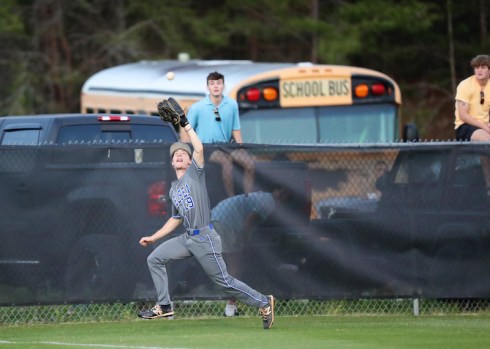 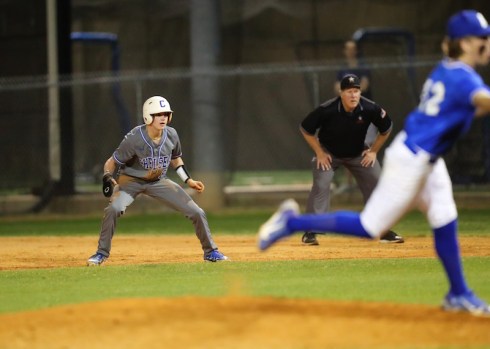 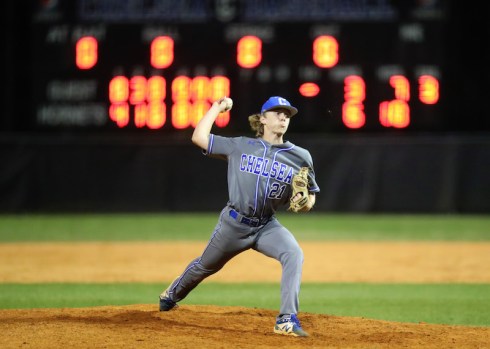 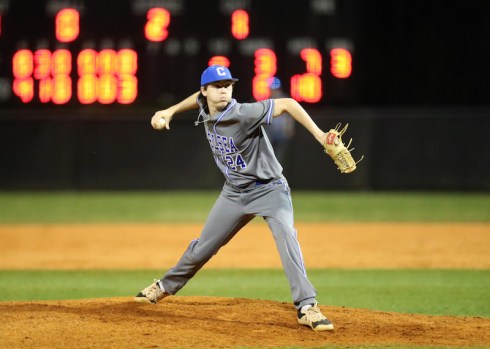 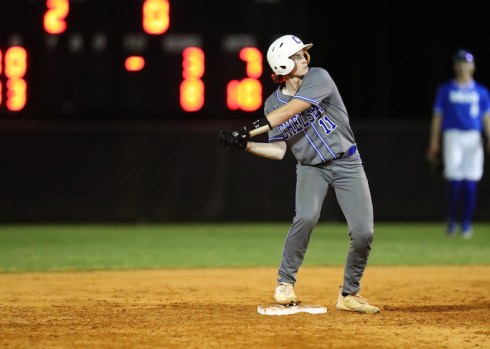 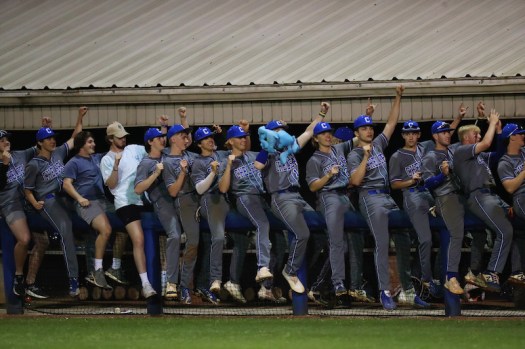 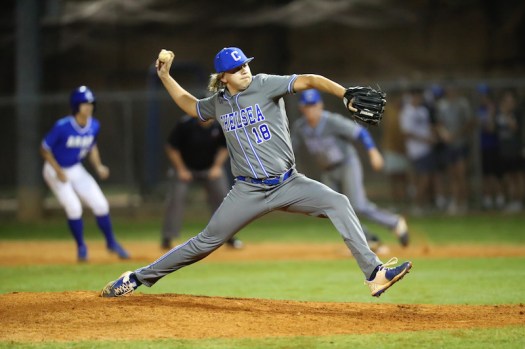 CHELSEA – The opening round of the playoffs didn’t come without its share of nail-biting moments for the Chelsea Hornets, but thanks to dominant pitching from Andrew Floyd in game one and a thrilling extra-inning victory in game two, they ended the night with a sweep.

Hosting Arab in the first round of the 6A postseason, Chelsea picked up a 1-0 victory in the opening game on the back of Floyd’s 11 strikeouts and complete-game shutout, while the Hornets then overcame a five-run deficit in the final inning of the second game to eventually win 10-8 in the eighth.

In the first game of the best-of-three series, Floyd put together a flawless effort on the mound for the Hornets.

He allowed one baserunner in each of the first two innings, but then settled in, only allowing the Knights to put one runner on base the rest of the way.

Floyd put together 1-2-3 innings in the third, fourth, sixth and seventh innings to help the offense remain patient at the plate.

That ultimately paid off in the bottom of the sixth when an error on a grounder from Chris McNeill not only allowed him to reach base safely, but eventually move all the way to third.

One batter later, Reid Gongwer hit a ball deep enough to left field to drive home McNeill for what became the game-winning run.

Now with a lead, Floyd stepped back on the mound in the top of the seventh even more confident.

In a dominant inning, he struck out the side to preserve the 1-0 victory. Floyd finished the game with 11 strikeouts and allowed three hits and no walks in the complete-game shutout.

The second game, however, featured a more challenging path after the Hornets fell behind quickly in the opening inning.

Battling with their season on the line, the Knights posted four runs in the bottom of the first to take an early four-run advantage.

Chelsea, however, bounced back in the top of the third with three runs of its own to pull within one.

Arab did tack on an additional run in the home half of the second to jump back up by two, but after that, both pitchers settled in, leading to a scoreless next three innings.

Just as Gongwer had battled back to settle in on the mound in a hard-fought outing, Arab was able to find a slight rhythm again in the bottom of the sixth.

The Knights added three insurance runs to their lead with an RBI single and two bases-loaded walks to take an 8-3 lead into the seventh inning.

Needing at least five runs to tie the game, it looked as if the Hornets were going to have to come back on Saturday to try and win the series, but the top of the order stepped to the plate in the top of the seventh and changed that quickly.

Christian Kallaher led off the inning with an important battle, eventually pulling off a double in a 0-2 count.

McNeill was then hit by a pitch before Jared Kaplan stepped to the plate and walked to load the bases.

A strikeout put the first out on the board after that, but a walk to Evan Jones then brought home a run and pulled Chelsea to within four.

Then, the hottest bat of the night stepped to the plate. As the designated hitter, Walker Thomas stepped into the batter’s box, already 3-for-3 with three doubles.

With the bases loaded, he quickly made it 4-for-4 with four doubles on the second pitch of the at bat, driving home each baserunner to bring Chelsea to within a run.

Still with one out and down a run, it didn’t take long for Jackson Morgan to drive home Thomas on an RBI single that evened the game before the top of the seventh ended.

Now a new game, Chelsea got through the bottom of the seventh quietly and came right back to the plate looking to capitalize on the momentum swing.

The Hornets did just that by loading the bases with two outs.

Jones then stepped to the plate, and after fouling off several pitches in a 1-2 county, he eventually found the one he wanted when he drove the eighth pitch of the at bat right at the shortstop, popping through the infield to drive home two runs.

Arab put two aboard in the bottom of the eighth, but a groundout ended the threat, as Chelsea completed the comeback with a 10-8 victory to advance to the second round.

Thomas finished the game 4-for-5 with four doubles and three RBIs to lead Chelsea at the plate. Jones and Morgan both had big games as well. Jones totaled three RBIs on one hit, while Morgan finished with two hits and two RBIs.

Carson Orr and Campbell McCluney both finished with a hit and an RBI in the win, while Kallaher added two hits and McNeill one hit.

Gongwer struck out five in his time on the mound, while Carson Camper got the win after pitching 2 1/3 innings with four strikeouts.

Chelsea will now travel to Cullman for the second round of the playoffs on Friday, April 29.