Montevallo overcomes 1-0 series deficit to down W.S. Neal in opening round 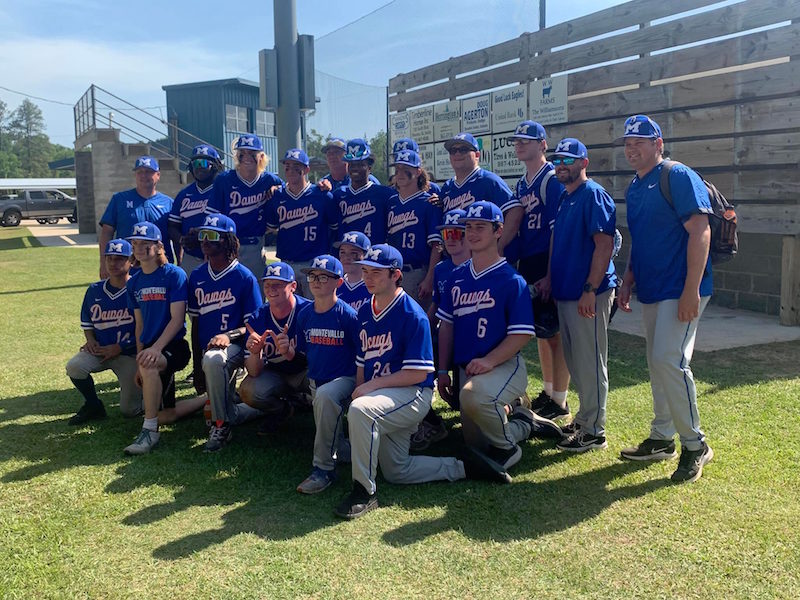 Montevallo bounced back from an opening loss to W.S. Neal by winning the final two games of a best-of-three series to advance to the second round of the playoffs for the first time since 2012. (Contributed)

EAST BREWTON – After losing a 3-1 lead and eventually falling 8-5 in the opening game of a best-of-three series with W.S. Neal to kick off the playoffs on Friday, April 22, the Montevallo Bulldogs were faced with needing two consecutive wins to keep their season alive.

The Bulldogs responded on Friday night by winning game two of the series 10-5. Then, they came back a day later and were able to overcome an early 4-0 deficit to beat the Eagles 9-6 and advance to the second round of the playoffs for the first time in 10 years.

In the second game of the doubleheader Friday, Montevallo came out and looked like a team fighting for its season.

The Bulldogs fell behind 1-0 in the top of the first, but they then responded quickly with five runs in the bottom half to take command early.

That was already enough for Grayson Duckworth to work with on the mound, as the starting pitcher was spot on for the majority of the night.

He pitched six innings and allowed two runs, one earned, on one hit and four walks, while he struck out seven batters.

W.S. Neal attempted a comeback in the top of the seventh, plating seven runs, but they got no closer, as Montevallo staved off elimination and forced a decisive game three.

In the win, Kial Cottingham totaled three hits and an RBI, while Andrew Thompson and Kemp Swords each added two RBIs on one hit.

The Bulldogs also got one hit and one RBI each from Duckworth, Wesley Burdett and Reid Cordes in the win.

Cordes also got the final three outs of the game, striking out two in the process.

On the road, however, the Bulldogs came back and found themselves in a tough situation early on Saturday.

The Eagles jumped out to a quick 4-0 lead, and while Montevallo responded with one in the top of the second, W.S. Neal came right back with one in the bottom half to make it 5-1.

At that point, the Eagles had the home crowd behind them, and the Bulldogs were facing a four-run deficit with their season on the line.

Montevallo, however, remained calm and worked to gradually erase the deficit.

The path back started in the top of the third with one run on an RBI single from Burdett, but it was the fourth inning that completely turned the tide.

A balk then allowed a run to score, while two still remained in scoring position before a second out was recorded.

Burdett then stepped to the plate and wasted no time singling to left field, driving home both baserunners to give Montevallo a 6-5 lead.

All of a sudden, the Bulldogs had erased the deficit and were in front.

W.S. Neal went on to tie the game in the bottom of the fourth thanks to an RBI single, but Montevallo never trailed again after the fourth inning.

A big reason for that was another big inning in the top of the sixth.

This time, it came in clutch fashion with two outs on the board.

Burdett singled in between a ground out and strikeout to put one aboard.

The Bulldogs reclaimed the lead on an RBI single from Brantley Burk.

That was followed quickly by huge back-to-back RBI doubles from Luke Oden and Cottingham to put the Bulldogs on top 9-6.

With that, they took all of the momentum and needed just six outs to survive and advance.

W.S. Neal put one on in the bottom of the sixth, but a double play ended that threat, while the Bulldogs then forced the Eagles to go down in order in the seventh to claim the three-run win.

Burdett finished the game 3-for-3 with three RBIs, while Cottingham had two doubles and two RBIs. Burk and Oden each had two hits and one RBI, while Baugh had one hit and an RBI and Cordes had one hit.

On the mound, Swords bounced back from giving up five runs in the opening two innings by allowing just one over the final five innings to help cement the win. He totaled five strikeouts and gave up nine hits with no walks in the winning effort.