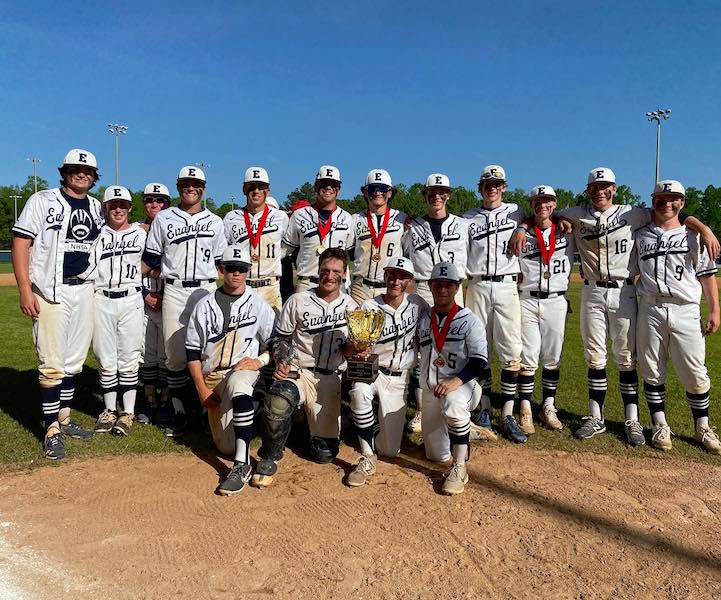 The Evangel Lightning won three consecutive games by a combined score of 37-1 at the ACSC State Tournament to claim their third state championship in a row. (Contributed/ECS Athletics)

ALABASTER – For the third year in a row, the Evangel Lightning kept their stronghold on the ACSC by winning their third consecutive state championship on Saturday, April 23.

The Lightning, who dominated ACSC play during the regular season, build off of that in the state tournament on their home field and put together a flawless three games on the diamond.

They gave up just one run in their three games and posted 37 combined runs en route to the title win.

In the opening game of the tournament, the Lightning matched up with East Central HomeSchool and wasted no time getting a strong showing started.

They scored 10 runs out of the gate in the opening inning to take a quick 10-0 advantage. From there, it was all Evangel.

Up 10-0, the Lightning added one in the second and four in the third to close out a 15-0 win in three innings of play.

On the mound, Patrick Yeager was perfect in the shortened win. He allowed no hits, runs or walks and struck out six to pick up the win.

The next game against Wiregrass took a little more time, but Oddo made sure Evangel picked up another shutout with an impressive outing on the mound in the semifinals.

He pitched a complete game of five innings and struck out 10 in the process. He allowed three hits and one walk but no runs in the winning effort.

Evangel again was able to pick up a run-rule victory, scoring three runs in the first, two in the third and six in the second to notch an 11-0 victory and punch a ticket to the state championship game.

Evan Bourn was the leader at the plate with two hits, two RBIs and two runs scored, while Gothard drove home three runs on one hit and a walk. Watkins also added two more RBIs thanks to a hit and a walk, while Welch finished with two more hits and an RBI.

That matched Evangel up with rival Ezekiel for the state championship, and it was more of the same.

The Lightning added another big first inning with four runs to take a 4-0 advantage, and that was the start of three consecutive innings with at least three runs.

They added four more in the second and three more in the third to storm out to an 11-0 lead that became too much for Ezekiel.

A big reason for that was another strong pitching performance, this time from Owen.

He struck out nine and allowed one run in the final inning, giving up three hits and four walks. Whitfield then came in to strike out the final batter of the game for the championship win.