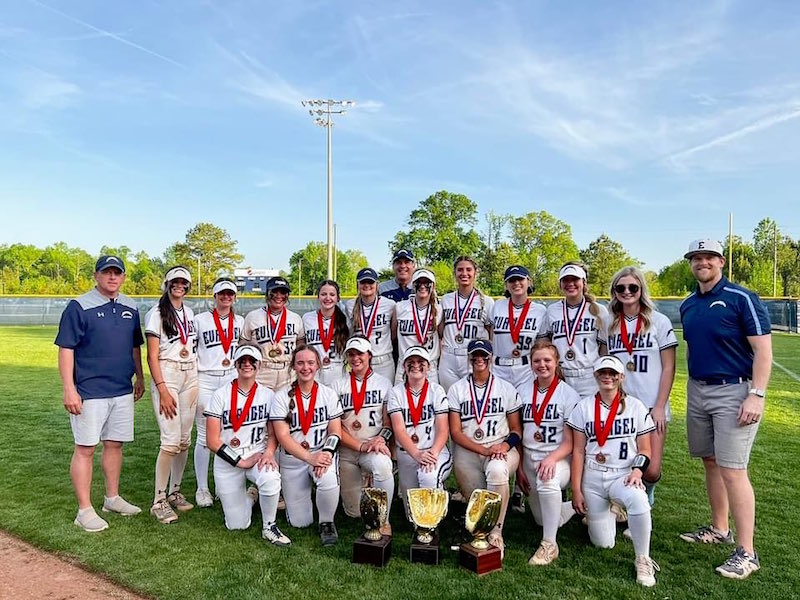 ALABASTER – The Evangel Lightning softball team finished off a special 2022 season Friday, April 22 and Saturday, April 23, by not just sweeping through the ACSC State Tournament, but doing so in dominant fashion.

The Lightning won three consecutive games by a combined score of 45-9 over their three opponents, beating East Central HomeSchool, Wiregrass and rival Ezekiel to bring home their second state championship in a row.

Evangel opened with a 12-2 win against East Central in the opening game of the tournament, then came back with a 16-3 win in the semifinals against Wiregrass to earn a spot in the championship against Ezekiel.

In the title game, it got no less dominant, as the Lightning took down their rival 17-4 to claim the state championship.

Evangel actually fell behind 2-0 in the first inning and was forced to fight from behind early, but the Lightning responded in a big way.

Despite giving up two in the first and two in the second, they set the tone for what was going to be a huge day at the plate with eight runs in the bottom of the first.

Evangel tacked on one more in the second to take a 9-4 lead, and then scored four each in the third and fourth, while Ezekiel failed to score the rest of the way.

Baylee Knight was key at the plate with three hits and five RBIs to lead the Lightning. Lauren Smith and Lilli Whitfield both finished with three hits as well, adding three RBIs and two RBIs, respectively.

In the circle, Lauren Smith got the championship win, finishing with eight strikeouts and giving up four runs on six hits and one walk. Reese finished off the final inning to cement the win.

In the semifinal win, it was similar success for Evangel, as the Lightning jumped out to a 5-0 lead in the first and then added six more in the third before Wiregrass scored three in the fourth.

Evangel then closed the game with a five-run bottom of the fourth to pick up the 13-run victory.

Knight led the way at the plate again with four RBIs on two hits, including a triple, while Smith finished with four hits and three RBIs. Myers also had three RBIs thanks to a 3-for-3 game at the plate. Littleton added three hits as well, also finishing with two RBIs, while Reese added one hit and one RBI.

Smith got the win in the circle, striking out three and giving up three runs on five hits and no walks. Alyssa Goodson finished off the final inning with 1-2-3 showing featuring one strikeout.

The opening game against East Central HomeSchool actually ended up being the most tightly contested, but like the other two games, it also ended in a 10-run rule win in five innings.

Evangel took the lead in the first inning, which became tradition throughout the tournament, thanks to two runs.

Through the top of the third, the Lightning led 2-1 before a four-run third became the difference maker.

That gave Evangel all of the momentum, and despite East Central adding one in the fourth, the Lightning came back with six unanswered runs in their final two plate appearances to finish off the 12-2 win.

Reese picked up the win in the circle, striking out four and giving up two runs on three hits and a walk. Whitfield finished off the final inning by striking out one and allowing just one hit.

Evangel will now hope to have a chance at the national title after finishing runner-up the last three years.