Riekebergs having baby boy after losing only daughter to rare cancer 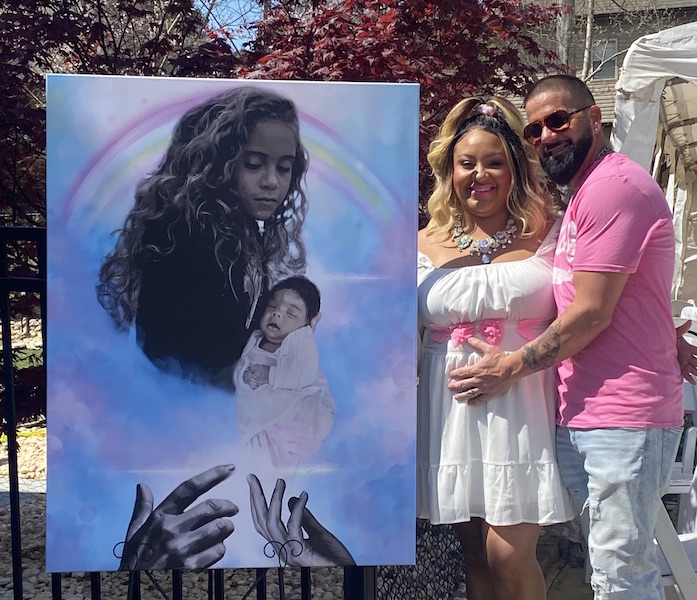 Lacretia and Dustin Riekeberg will be having a baby boy two years after losing 9-year-old daughter Destiny to a rare form of cancer. (Contributed)

PELHAM — On Sept. 17, 2020, Lacretia and Dustin Riekeberg had to do the unthinkable—they said goodbye to their only child, 9-year-old Destiny, as she succumbed to a rare form of cancer.

Since then, it goes without saying that the Riekebergs’ road through grief has often been a dark and bumpy one, even with all the support of friends, family, their social media family of “faithbookers” and the inspirational words of their own daughter.

However, on Jan. 22, just as Dustin and Lacretia were getting ready to leave for Cancun, Mexico where they celebrate Destiny’s birthday each year, they found themselves celebrating early—they were going to have a new baby.

“We felt like it was a gift from Destiny,” Lacretia said. “It was such a big surprise right when we were getting ready to celebrate Destiny’s heavenly birthday.”

The couple, through the urging of Dustin, decided to keep the gender a secret from themselves until the big reveal on April 2, when a pilot flew over their neighborhood and the color smoke emitted would create a magical moment—and at the first sight of blue smoke, the Riekebergs were overjoyed.

“It was such a defining moment seeing that blue come out of that plane, and it was one of the most exciting days of our lives,” she said.

But the journey to April 2 wasn’t easy. It took the Riekebergs several months after Destiny’s passing before they even began talking about a new baby. There were days when Lacretia dreaded getting up the next morning. Other days were better, but as any parent who has lost a child will tell you, grief is not something that you get over.

“People that have to endure grief, you have to mentally bring yourself to a place where you feel like there’s still purpose,” Lacretia said.

For a long time, the couple’s focus was upward, as their sense of purpose was in the hope that they will reunite with Destiny one day. While that did not change, as the conversation about a baby progressed, their focus grew to encompass an earthly purpose again.

In January 2021, the Riekebergs visited a fertility clinic for a checkup, as they were embarking on the journey of being over-40 new parents.

“We wanted to be earthly parents again. We love being parents,” Dustin said.

Added Lacretia, “We really didn’t get into anything too invasive with the fertility people, but they checked my health and my status to make sure everything was good.”

Unfortunately, after several months of trying, the couple was not seeing results. And on top of the grief, the pain of disappointment caused a significant amount of stress. So they decided to take a pause, stop going to the clinic and live life for a while.

Then, about five months later, in December 2021, it happened.

On Feb. 3, Lacretia posted on her Facebook page saying, “We weren’t expecting this…but we are expecting!” alongside a photo of framed artwork that read, “After every storm comes a rainbow,” revealing that her due date is in September, the same month of Destiny’s passing as well as Childhood Cancer Awareness Month.

The baby’s name will be Destin Alijah King Riekeberg.

“Destin is the male version of Destiny,” Lacretia explained. “We didn’t know Destin meant Destiny until people started suggesting it to us.”

The name “Alijah” comes from Destiny’s friend Ace, who came to know her at Children’s of Alabama. Ace, whose family was previously unknown to the Riekebergs, took an interest in checking on Destiny and would send her messages regularly.

“He was her little boyfriend,” Lacretia said. “The way they met was somebody had shared Destiny’s story with his mother. One day, he asked his mom if Destiny could be his girlfriend. It was the cutest thing ever. When she got out of the hospital, he would bring little gifts.”

Dustin pointed out that the baby will have the same initials as Destiny, whose full name was Destiny Arianna Kay Riekeberg. But that was not the plan initially—at first, Dustin wanted his son to be a junior.

“He’s going to be bigger than a junior, so I just thought about paying respect to his sister,” he said. “I just thought that was the right thing to do.”

Dustin, on the other hand, initially wanted a girl.

“Being a girl dad, that’s all you know,” he said. “I just wanted to look at her and see what characteristics or traits she had of Destiny. I think I was just kind of wanting to have those visual signs of Destiny on earth. And then, when I found out it was a boy, if you watch the video, my knees start to buckle and then I grab my forehead. I literally thought I was going to hit the ground.”

Destin’s nickname is going to be “Deuce” to represent that he is the second child; this was also inspired by Destiny always doing the peace sign. She had a well-known nickname too, “Desto.”

Dustin, who loves to hang out with kids and play basketball, said he cannot wait to do that with his son, who is going to have “the sickest basketball court ever.”

“We feel like this little boy’s going to keep us young,” Lacretia said.

The couple thanked all who helped them plan for the big moment and to their friends, family and community members who helped make the day special on April 2—as well as provided support before and since. They said that on that day, the party planner and the pilot of the plane were the only two people who knew the gender, aside from medical personnel.

“I feel like we have a great support system,” Lacretia said.

Meanwhile, the Destiny StrongER Foundation continues to support other families going through similar battles with childhood cancer, while honoring Destiny’s memory and legacy. For more information or to donate, visit Destinystronger.org.