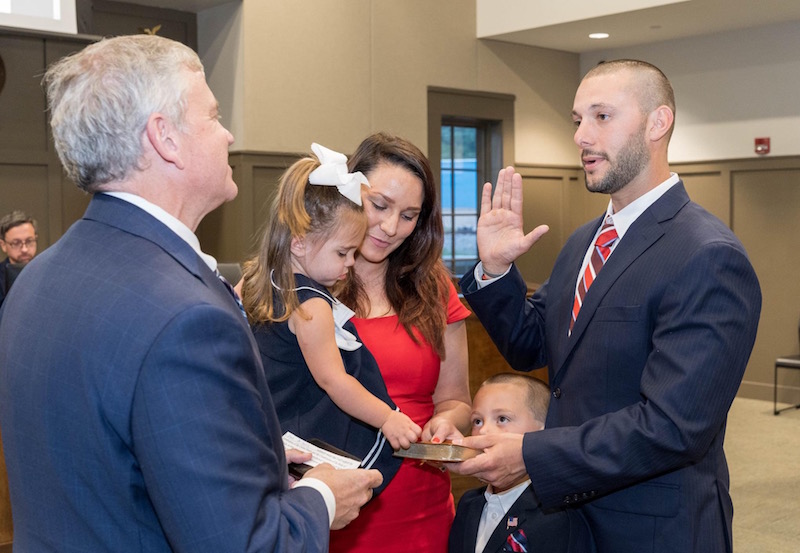 The Alabaster City Council has a new representative for Ward 6 after Zachery Zahariadis was approved to the position on April 25 following the resignation of Seth Gandy. (Contributed/City of Alabaster)

Zachery Zahariadis was officially sworn in during the April 25 council meeting and will now serve Ward 6 after Councilman Seth Gandy resigned.

In a letter to the council, Gandy stated he resigned because he sold his home and did not remain in his ward.

“It is with a saddened heart that I must inform you I am no longer able to serve on this council,” Gandy wrote in a letter to the council on April 11. “Due to the time that has passed and the unknown moving forward, I believe it is in the best interest of the city and my family if I step down from my position effective immediately.”

Gandy said it had been a difficult decision for him, and the citizens of Ward 6 were some of the “best” Alabaster has to offer.

According to Alabaster Public Information Officer Neal Wagner, Gandy recommended the council consider Zahariadis to fill the remainder of his council term.

“The council members then took Seth’s recommendation into consideration when making their appointment,” Wagner said.

Gandy said in his letter that he has known Zahariadis for “quite some time” and told the council that he was a family man who has a massive love for Alabaster.

“More importantly, he is a man of integrity and a heart to serve others, and I have no doubt he will represent Ward 6 well,” Gandy said in his resignation letter.

In the event a council member resigns before their term is over, state law requires the council to identify and appoint an individual to fill the remainder of that term.

Gandy was initially elected to represent Ward 6 in 2020.

According to information provided by the city of Alabaster, Zahariadis has lived in Ward 6 for 12 years and is very active in the community.

He is currently the head coach of the city of Alabaster’s 6U baseball team and also coaches flag football.

He and his wife, Kaitlan, have two children, Roman, 6, and Analeigh, 2.