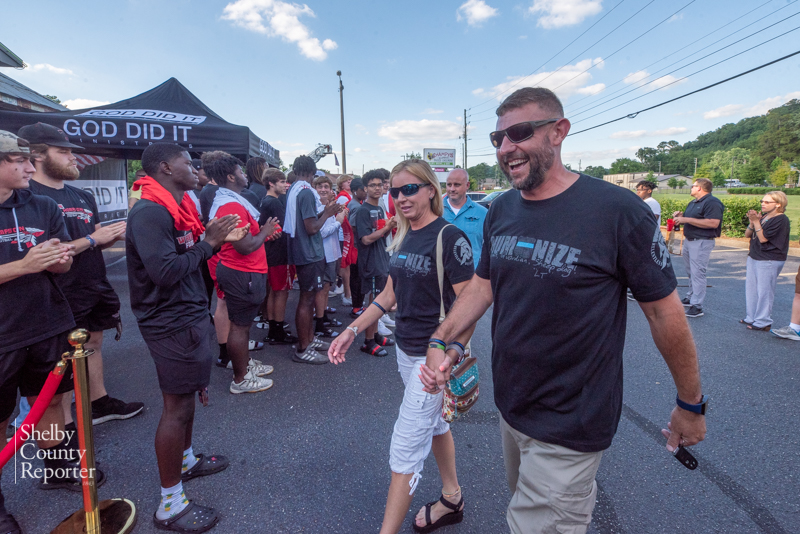 Supporters greet officers as they welcome attendees to the 2021 Alabaster Police Appreciation Dinner. The dinner will once again take place Tuesday, June 14. (Contributed)

ALABASTER — Each year since 2016, Dena Bedsole has organized the Alabaster Police Appreciation Dinner.

It was in 2016 that Bedsole, an Alabaster resident and wife of a police officer, watched news coverage of a tragic incident in which five Dallas police officers were ambushed and killed in the line of duty, and nine others were injured. This inspired her to do something in support of local police officers.

“A lot of things were going on in the police world,” Bedsole recalled. “This created an avenue for the citizens of Alabaster to show our officers that they’re loved and appreciated here.”

The dinner will once again take place Tuesday, June 14 from 6-8 p.m. at Champy’s Chicken at 10695 Alabama Highway 119. In addition to the meal, the event will include prizes for officers in attendance, as well as live music and a bounce house for kids.

According to Bedsole, the event has become extremely popular and well attended, and has garnered the support of featured sponsor Cultivate Church in addition to other community sponsors.

“We’ve had police officers in the past who have come home from vacation to attend this event,” she said.

This year, however, Bedsole has had issues with visibility of the event’s Facebook page. She is asking members of the community to share details about the upcoming dinner via word of mouth, linking to the Facebook page or by sharing her own contact information.