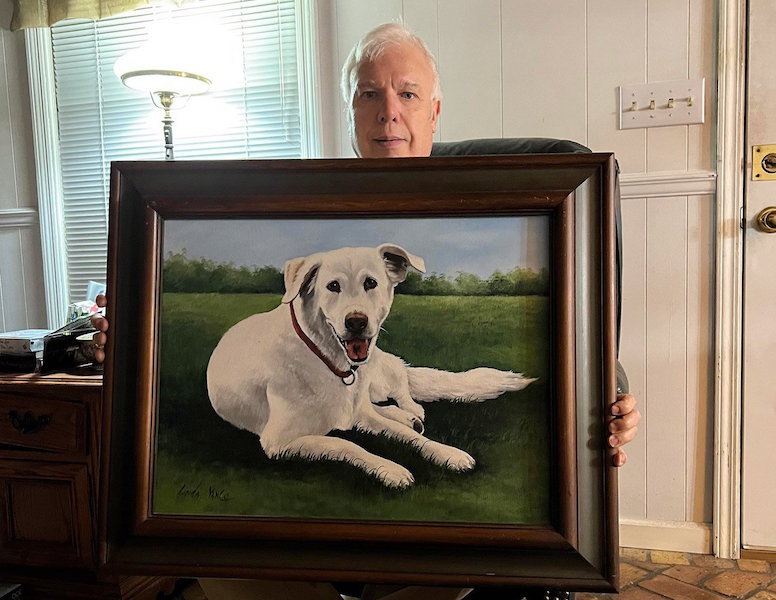 Randy Hays, the founder of Dixie’s Group, a grief support group for those who have lost beloved pets, holds Dixie, who died unexpectedly in 2013 from kidney failure. Hays spoke April 21 at the Alabaster-Pelham Rotary Club. (Contributed)

Randy Hays was devastated when his beloved pet Dixie, a Labrador Retriever, died unexpectedly in 2013 from kidney failure. But when Hays tried to find a place for support during his grief, he had difficulty finding that place.

A search of local grief support groups turned up only groups for people who have lost human loved ones. Knowing that there were surely others like him, Hays set out to change that.

“A pet can become like another member of the family,” said Hays, who shared his story on April 21 at a meeting of the Alabaster-Pelham Rotary Club. “Dixie was just like my child. I was devastated, and I didn’t know what to do. I cried and cried.”

Through the help of the Greater Birmingham Humane Society and Homewood Public Library, Hays founded Dixie’s Group, which seeks to provide a place of understanding and support for those who have lost a beloved animal companion. Also instrumental in the group’s formation was Dr. Larry Michael, associate pastor of South Highland Presbyterian Church and a trained grief support counselor who leads the group meetings.

“Having someone who is trained with those types of credentials makes our meetings much more efficient,” Hays said.

Dixie’s Group has held regular meetings since February 2014. The group meets the last Tuesday of each month at Homewood Public Library, 1721 Oxmoor Road, from 6-7 p.m. The meetings are held in Room 116 of the library.

“We’re trying to do everything we can to spread the word in Shelby County about our group,” Hays said. “People are certainly welcome to come anytime.”

The stated mission of Dixie’s Group is “to give support, guidance and resources to people when their pet has died.” This is accomplished by allowing members the freedom to share stories, and through the camaraderie shared by participants.

The ultimate goal is healing and hope that each member will be able to welcome a new pet into their life.