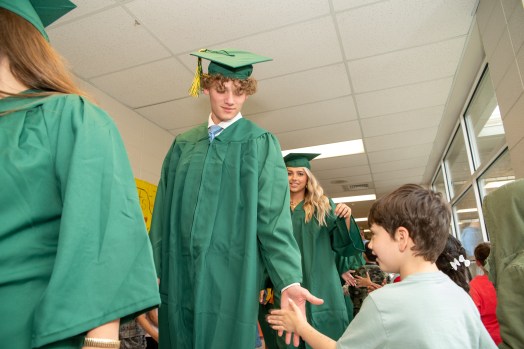 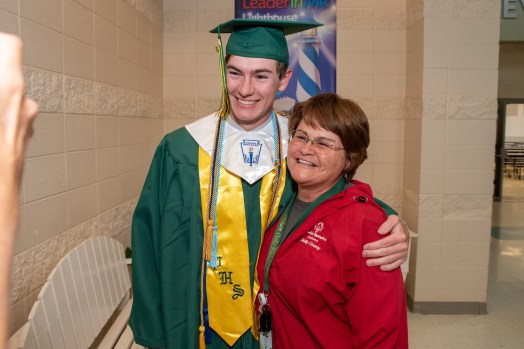 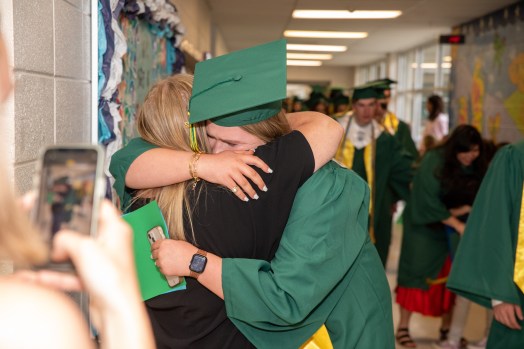 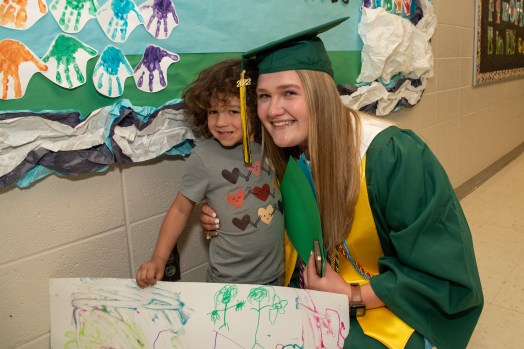 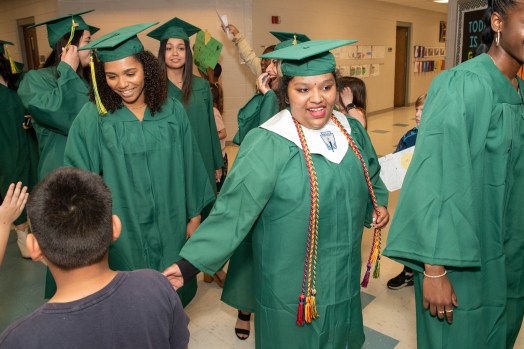 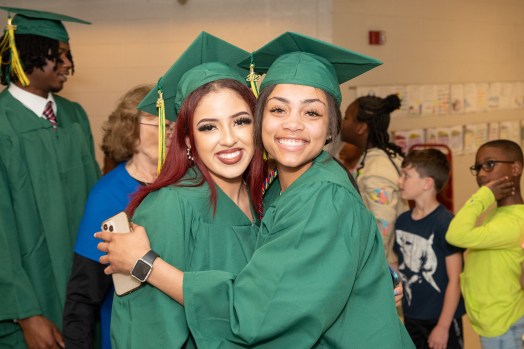 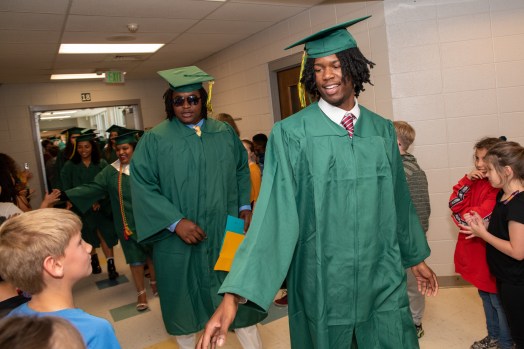 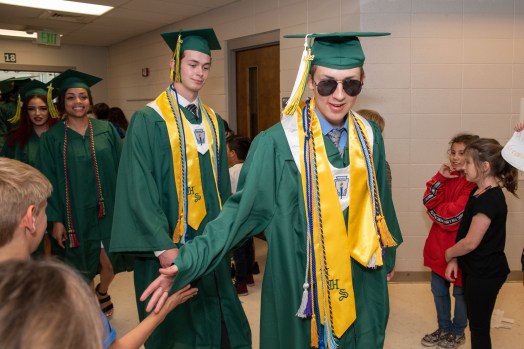 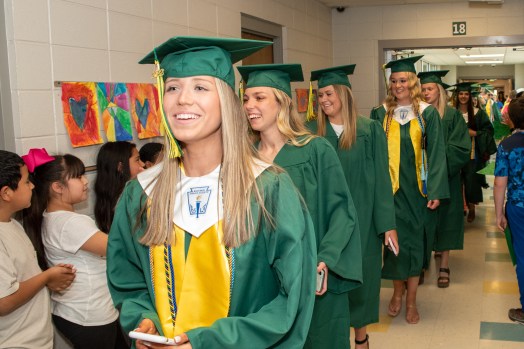 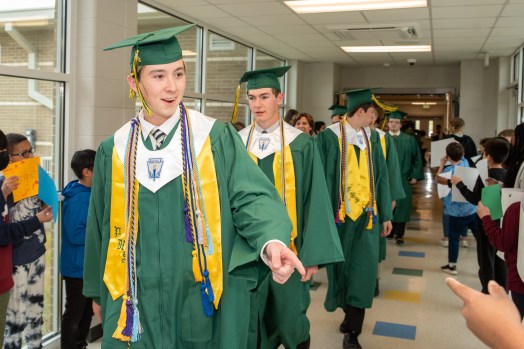 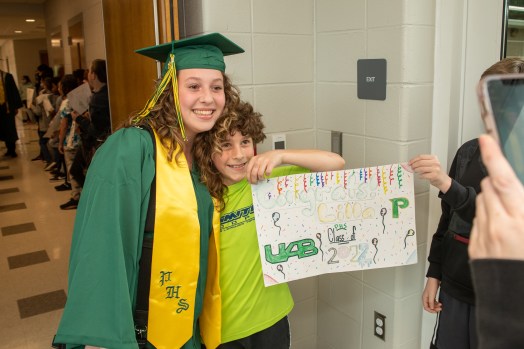 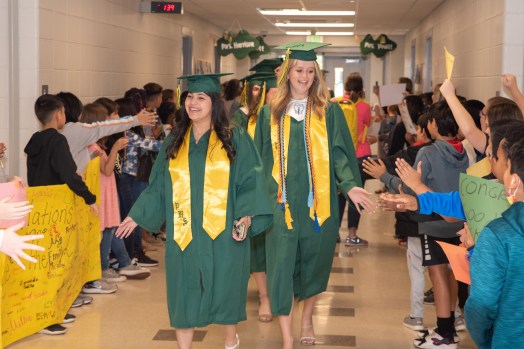 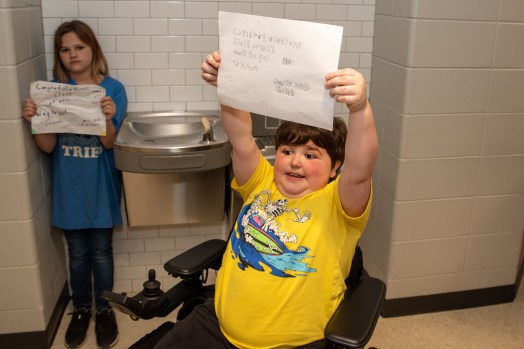 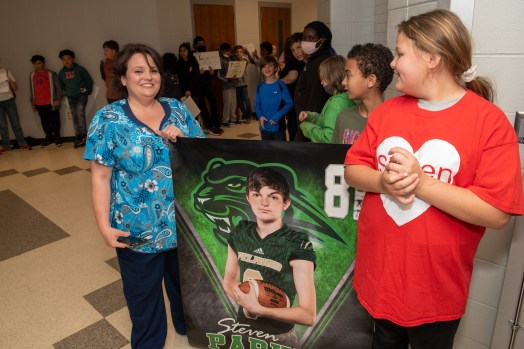 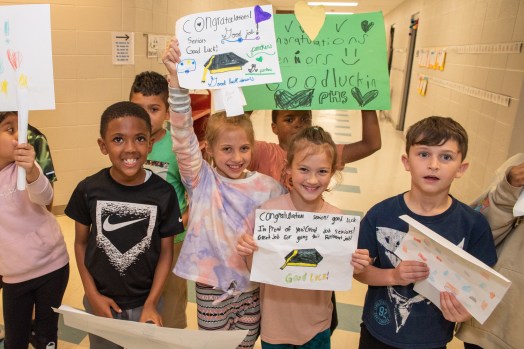 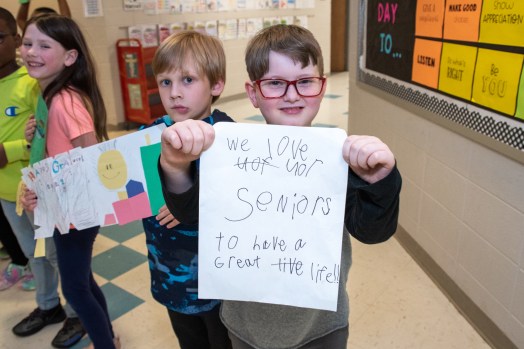 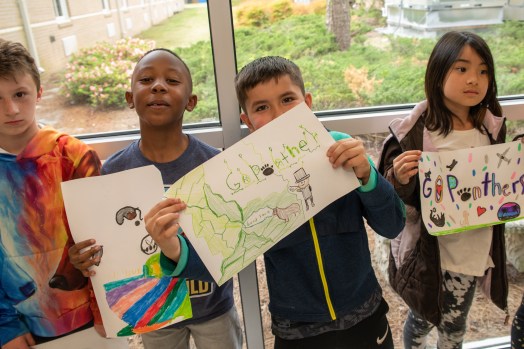 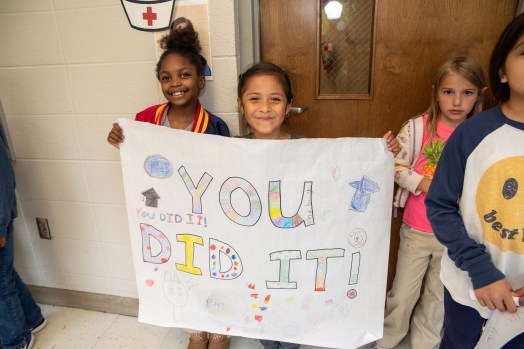 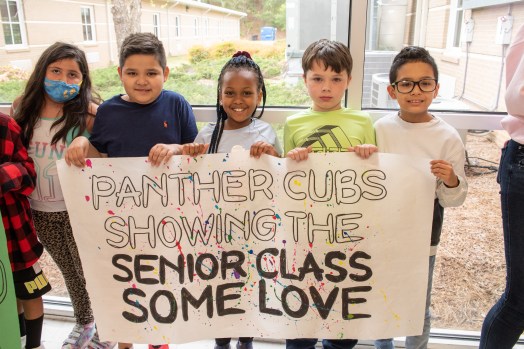 PELHAM – The seniors of Pelham High School donned their cap and gowns for the annual Senior Walk on Wednesday, April 20.

The Senior Walk involves the PHS seniors going to Pelham Oaks and Pelham Ridge Elementary schools to walk through the halls as elementary grade students cheer them on. Several of the elementary students held up encouraging signs and held out their hands eagerly for high fives.

The entire day was eventful for the seniors, as they began their morning at Railroad Park to take photos before heading to The Florentine for a special senior luncheon. There, Senior Class President Shawn Winn made an introduction speech welcoming everyone to the luncheon. Then the students were treated to a special presentation from Timothy Alexander, a life coach and motivational speaker who spoke about determination, purpose and resilience.

Alexander was introduced by Pelham senior Carrington Mills, who said she was honored to be chosen for the job.

“It made me also proud of myself because public speaking is something I really love to do, and it was just a further reminder that over the course of these last four years Pelham High School has really given me the opportunity to grow and give me opportunities to do better,” Mills said.

Both Winn and Mills said they were excited to take part in the Senior Walk. Winn said he had been looking forward to the experience after seeing photos from previous years.

“When I first walked through the double doors of the building and all the students were there cheering us on, it just felt really nice,” he said. “It felt like the people there looked up to me and they aspired to be where I was.”

The walk also gives students the opportunity to revisit old stomping grounds and to reunite with former teachers who have had an impact on them. Winn said he ran into a former gym teacher who expressed how proud she was that he was graduating.

Though she didn’t attend Pelham during her elementary years, Mills said she felt a wave of nostalgia for when she was younger.

“It just reminded me of what it felt like to be in their shoes,” she said. “I’m in a position now where I go, ‘I have wanted to be here for so long,’ and knowing when I look back I did the things I’m supposed to do and I’m here because of my hard work, it I have no regrets.”

Mills said the walk gave her a better appreciation of the hard work of her teachers and parents who helped motivate her and inspire her to be where she is now, something she wants to do for the younger students.

“Representation is so important,” she said. “It’s hard to achieve something when you don’t know if it’s possible for you, so for me being a minority amongst some children or being somebody that children can look up to, I believe it makes it easier for them to achieve their dreams. Sometimes you don’t see that representation so you’re just aimlessly groping for that inspiration or hope, and that’s what I aim to be for younger children.”

Winn agreed that when students see someone who they admire or who reminds the students of themselves succeed, it makes that success seem more attainable. There was one moment during his Senior Walk that stood out in particular to him.

“The kids were lined up against the wall and all their little hands were sticking out trying to get a high five, and you could kind of see the kids that were being pushed to the back, so I made sure to high five all the kids up front and the ones in the back,” Winn explained. “There was this little girl who had her hand out, and I high fived her and she just had the biggest smile on her face. I don’t know if because she was in the back nobody had high fived her yet, but it felt really good to see her smile.”

Winn and Mills both said it meant a lot to them to inspire elementary students who had a special place in their hearts, as well. Winn said his favorite part was seeing his best friend’s little sister be so excited to see him walk down the hallways.

“I was going down the hallway, and I turned the corner and I saw Josh holding Abbey,” he said. “I said, ‘Hey, Abbey!’ and she shouted my name and jumped out of Josh’s arms and ran over to me and jumped in my arms. That was just really cool for her to see me in my cap and gown and be so excited congratulating me.”

For Mills, she her favorite part was seeing her brother at Pelham Ridge.

“I knew he was going to be there and I expected to see him, but he actually made me this little poster board with my face on it and it said, ‘My sister rocks,’” she said. “It made me so emotional, and all his friends when they saw me they shouted, ‘That’s Mason’s sister!’ It just further emphasized how happy I am to be able to see them and inspire them.”