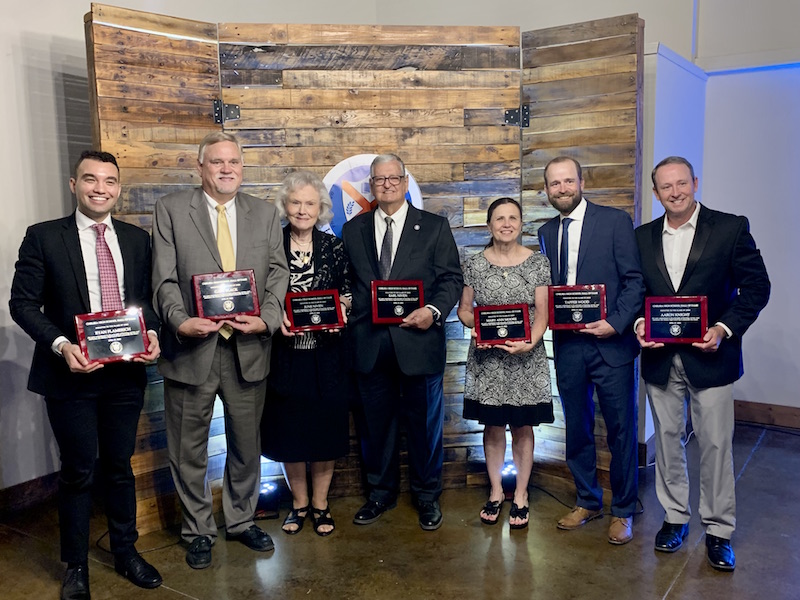 The CHHS Hall of Fame was established in 2021 as an annual celebration of individuals who have played a significant role in shaping the school and community.

“We wanted a way to be able to connect that from the current students that we have to the past people that meant so much to our school,” CHHS Principal Dr. Brandon Turner said, noting the idea for the Hall of Fame came from a conversation he had with Social Studies teacher Ryan Adams, who serves as the SGA faculty sponsor. “On the front of your programs, you will see the words learning, service and character. These are the pillars that we believe are the main function of our educational institution. We want our students to embody these things, but these things are also represented through our honorees here this evening.”

Adams said the Hall of Fame was also a positive addition to the SGA’s efforts to refocus, redirect and revitalize its role in the school and beyond amid the COVID-19 pandemic.

“One of the goals that we have is to connect the high school with the Chelsea community,” Adams said. “One way we have tried to carry out this goal was the establishment of the Chelsea High School Hall of Fame in April 2021, honoring six inductees in the inaugural class.”

Adams described the Hall of Fame as a bridge connecting current and past students, and shared the following quote from one of former U.S. Attorney General Robert F. Kennedy’s speeches: “All of us are most concerned about the kind of America we want to pass on to our children. Every generation inherits a world it never made; and, as it does so, it automatically becomes the trustee of that world for those who come after. In due course, each generation makes its own accounting to its children.”

Tapper Wood received this year’s athletic award. Wood is the only state champion golfer Chelsea has ever produced, winning the 1999 5A state tournament and helping his team go 10-2 in the regular season when he was a senior.

Ryan Flamerich received the academic award. Flamerich was the CHHS Class of 2009 valedictorian and participated in French Club and SGA, serving as student body president. He majored in chemical engineering and political science at the University of Alabama.

Gary Black received the student impact award. Black taught Advanced World History at Chelsea Middle School for 19 years and was known for his work with the annual Night at the Museum production. Black also served in the U.S. Navy.

Aaron Knight received the community award. Knight grew up in Chelsea and is the senior pastor of Redemption Church. He has also led recent efforts to raise money and support for the preservation and renovation of Hargis Christian Camp.

As the first couple to be inducted into the Hall of Fame, Earl and June Niven received the heritage award. They grew up in Chelsea and trace their family roots in the city back through multiple generations. They both taught at Chelsea schools and were involved in efforts to incorporate Chelsea as a city in the 1990s. Earl was elected as Chelsea’s first mayor in 1996 and served in the position for 20 years.

SGA President Kate Peterson said in addition to the Hall of Fame, the scope of the Chelsea High School SGA has drastically expanded in the last two years.

“SGA is a place where students are encouraged to reach for their goals and to get out of their comfort zones,” Peterson said. “It’s a place where failure isn’t final; it’s merely a stop along the road. Students are given amazing opportunities to further their leadership skills and change our school and community for the better.”

Turner said the students in SGA handle all aspects of the Hall of Fame, from collecting and vetting nominees to securing funding and making plans for the annual ceremony.

“These amazing things would not have been possible without the encouragement from not only our amazing faculty sponsor, but also so many members of the community,” Peterson said. “With this support, we, together, have been able to better our community.”