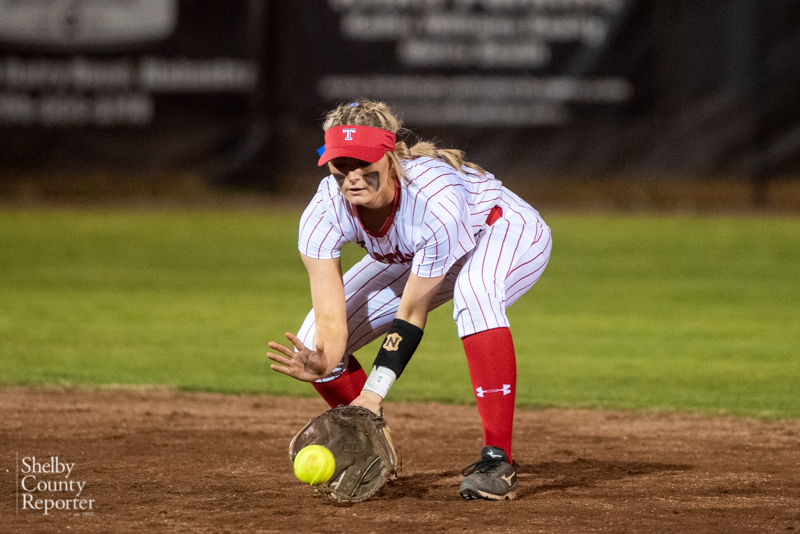 Heading into the postseason, the Thompson Warriors will have some confidence-boosting wins to build off of after winning back-to-back top-10 games on April 27 and April 28.

The Warriors totaled 24 hits, 12 in each game, against the two opponents, taking down Spain Park and Hewitt-Trussville.

Thompson’s strong two-game stretch started on Wednesday, April 27 against Spain Park, as the Warriors outhit the Jaguars 12-6 in a tight 3-2 win.

Thompson scored two runs in the top of the first after a two-out rally was started by three consecutive singles from Laney Williams, Ella Pate and Jenna Williams.

The fourth single in a row came from Chalea Clemmons, who brought home two runs before the top half of the inning came to an end with the Warriors in front.

Spain Park answered back with an RBI walk from Emma Jolley and an RBI single from Emma Hawkins to even the score through two innings, but Thompson’s pitching and defense was on point from there.

Pate broke the tie in the top of the third with an RBI single to put Thompson up 3-2, and that became enough.

Spain Park went down in order the next two innings and put four runners on base the rest of the way with none finding their way home.

Clemmons went the first three innings in the circle and gave up both runs on three hits and five walks with four strikeouts, while Holly Selman pitched four scoreless innings to close the game.

Dailynn Motes led Thompson with three hits, while Laney Williams, Jenna Williams and Pate all finished with two hits. Pate added an RBI, while Clemmons finished with one hit and two RBIs.

A day later, the Warriors matched up with Hewitt-Trussville and carried their confidence into the game.

This time around, they capitalized on the 12 hits, scoring 12 runs, while the pitching and defense remained strong in a 12-0 shutout.

Thompson scored three in the second, four in the third, two in the fourth and three in the fifth to steadily pull away for the run-rule victory. .

The Warriors’ bats were on fire, as they not only had 12 hits, but hit four over the fence.

Laney Williams and Pate even had back-to-back home runs to lead off the third, an inning in which the Warriors had three home runs after Kendall Channell blasted one later in the inning.

Pate finished 3-for-4 with two home runs and five RBIs, while Channell added three RBIs on two hits and a walk. Eleanor DeBlock and Laney Williams both had two hits and an RBI as well, while Motes finished with one RBI.

In the circle, DeBlock picked up the complete-game shutout by striking out four and allowing two hits and no walks.