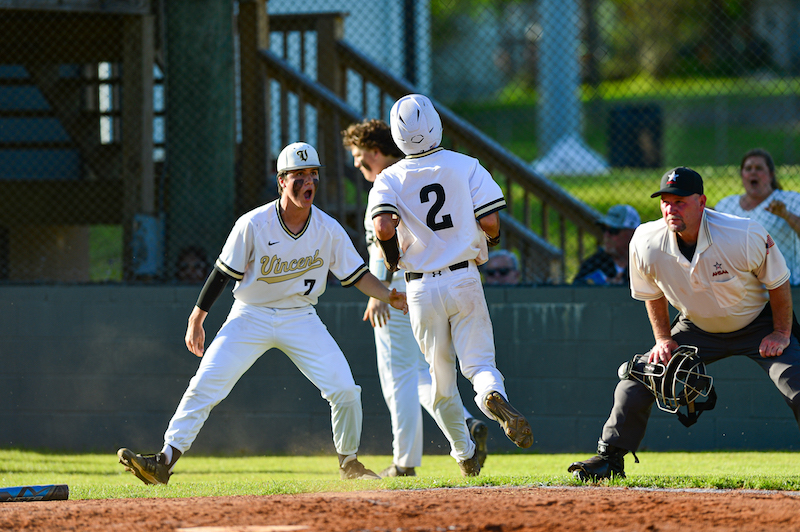 The Vincent Yellow Jackets won a thrilling series with Leroy, taking the final two games with a 2-1 win in eight innings and a seven-run comeback in the final inning of the series finale. (File)

LEROY – In a series that featured a little bit of everything, it was one last chaotic moment in the final inning of a decisive game three on Saturday, April 30 that sent the Vincent Yellow Jackets to the quarterfinals of the Class 2A playoffs.

Trailing Leroy 12-6 on the road with their season on the line, Vincent came to the plate with nothing to lose in the top of the seventh, and something magical happened.

The Yellow Jackets quickly loaded the bases thanks to a double from Grayson Gulde and back-to-back walks to Myles Fincher and Will Carden.

During the next at bat, which ended with a strikeout to put the first out on the board, Gulde scored on a wild pitch for what became the first of seven runs in a remarkable comeback effort.

One batter later, still down by five, Zac Carlisle stepped to the plate and quickly made things interesting when he blasted a home run to left field that cut the deficit to two.

The next two batters were hit by pitches before a walk loaded the bases for the second time in the game with still just one out.

That set the stage for Aiden Poe. After coming up big the day before in game two on the mound, Poe was back at it in the series finale with a two-RBI double that erased the deficit and tied the game.

Vincent, however, wasn’t done. After all that work, the Jackets were determined to take the lead into the home half of the final inning, and that’s exactly what happened.

With great awareness, Easton Fields was able to score what became the game-winning run on a passed ball to put Vincent on top 13-12.

The Yellow Jackets did leave two runners in scoring position, however, leaving the game closely contested going to the final half inning.

That didn’t matter, however, thanks to Gulde finishing off a strong game in relief.

After Leroy had scored at least two runs each of the previous four innings, Gulde was able to capitalize on the momentum his team had seized and put the Bears down in order to cap off a thrilling comeback win to send Vincent to the third round of the playoffs.

It marked the first 1-2-3 inning of the game for the Yellow Jackets in the field.

Vincent was led by Carlisle’s home run, as he finished with team-high three RBIs. Poe added two RBIs on two hits, while Gulde and Fincher also finished with two hits and one RBI each. Fields and Carden both added a hit and one RBI in the comeback win.

It closed out a remarkable series that saw the two teams score 10-plus runs in two of the three games and a combined three runs in the other game.

Leroy took game one of the series on Friday afternoon in another high-scoring affair that featured a combined 28 runs.

Leroy quickly evened the game in the bottom half and scored at least two runs in the first five innings of the game.

Vincent’s last lead came in the third when the Jackets scored two more to take a 10-8 advantage. From there, however, Leroy finished off the game with three in the third, three in the fourth and two in the fifth.

The Jackets were led by Fields and Gowers with three RBIs each in the loss.

That quickly put the Jackets in a must-win position in game two of the series on Friday night, but a special two-game stretch started behind a remarkable outing from Poe on the mound.

Leroy took a 1-0 lead in the top of the third, but that was the final time the Bears scored in the game.

Poe helped himself out with an RBI single in the bottom of the fourth that evened the score at 1-1, but the game was quiet for the rest of the matchup.

Both teams got through the seventh inning without breaking the tie, forcing extra innings.

Leroy put two aboard in the top of the eighth, but three consecutive outs ended that threat and brought Vincent to the plate looking for the walk-off win.

And that’s literally what the Jackets got.

After a ground out led off the inning, Vincent drew four consecutive walks with the final one bringing home Fincher to give the Yellow Jackets a walk-off 2-1 victory.

Poe’s performance with his team’s season on the line was impressive.

He finished one out short of the complete game, striking out 15 and allowing one unearned run, two walks and one hit in 7 2/3 innings. Carlisle then stepped in and got an emphatic final out of the game with a 16th strikeout for the team.

At the plate, Poe had one RBI on the lone hit, while Fincher had the game-winning RBI with his walk. The Jackets drew seven walks in the game, including four in the final inning to win it.

Vincent will now host top-ranked G.W. Long in a battle of top-three teams for a spot in the Class 2A semifinals.

Long has yet to give up a run in the postseason with back-to-back sweeps by a combined score of 60-0.