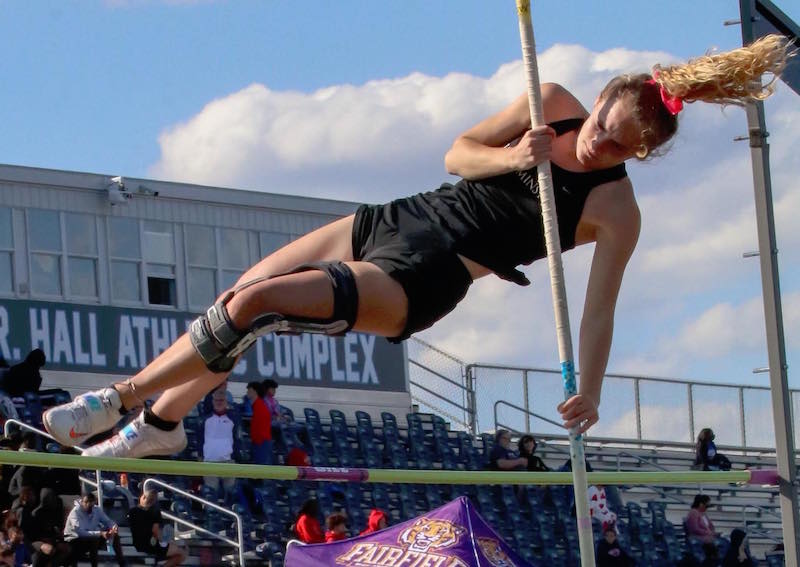 All five schools performed well in their respective sectional meets, with several athletes advancing to this year’s state meet.

The most impressive outing for local teams came from the Westminster at Oak Mountain Knights, who totaled 25 podium finishes at this yar’s Class 2A, Section 2 meet at Paul W. Bryant High School.

Impressively, Westminster’s girls accounted for 18 of those podium finishes, while nine of those 18 won section championships.

Maggie McCallum won two titles for the Knights, claiming first in the javelin throw and the shot put. She finished the javelin with a distance of 104 feet, 11 inches, while she totaled 31 feet, 5 inches in the shot put.

She also finished third in the discus throw with a distance of 84 feet, 7 inches.

Richie finished behind teammate Elizabeth Bandura in the 300-meter hurdles, as Bandura finished first with a time of 49.95 seconds, while the two finished just ahead of Madden Sellers in third. With Sellers claiming third behind a time of 52.43 seconds, the Knights swept the event.

The final individual podium finisher was Reave Metcalf with a finish of second in pole vaulting after clearing 9 feet, 6 inches.

As for the boys, David Haskins had an impressive event, winning the 300-meter hurdles with a time of 42.79 seconds, while he also finished second in the 400-meter dash with a time of 53.44 seconds.

Charlie Davis finished on the podium in the 800-meter run with a time of 2:08.09 to claim second, while the 4X400-meter and 4X800-meter relay teams both won their respective races.

Competing in the Class 2A, Section 3 meet at Beuregard, the Vincent Yellow Jackets also had an impressive weekend.

The Jackets had seven podium finishers at the meet, including two section champions.

Jordan Eatmon was the highlight for Vincent, winning both the 110-meter hurdles and 300-meter hurdles behind times of 15.90 seconds and 41.04 seconds, respectively.

Lee Robertson also finished highly for the Yellow Jackets in the 1,600-meter run. He finished second in the event thanks to a time of 5:32.33.

Evan Swain added another second-place finish for Vincent in the shot put after reaching a distance of 41 feet, 9.25 inches.

Competing at the Class 5A, Section 2 meet at Beuregard High School, the Shelby County Wildcats had three podium finishers and one win at this year’s event.

The Wildcats were highlighted by Will Stroud, who won the high jump after clearing 5 feet, 8 inches.

Stroud finished just ahead of teammate Luke Lewis, who also cleared the same height as part of a strong duo for Shelby County.

Beyond those two, the girls also added a podium finish from Olivea Harper.

The Montevallo Bulldogs and Indian Springs competed in the Class 4A, Section 3 meet and both finished the weekend with highlights.

The Bulldogs were led by the 4X100-meter relay team, which finished second in both the prelims and finals. In the finals, the team bested the prelim time by finishing the event in 44.82 seconds.

Montevallo also got a podium finish from Tamardreon Purnell in the 400-meter dash. She ran the race in 53.29 seconds to grab third.

Elise Picard continued an impressive season for Indian Springs at the meet, finishing on the podium in three different events.