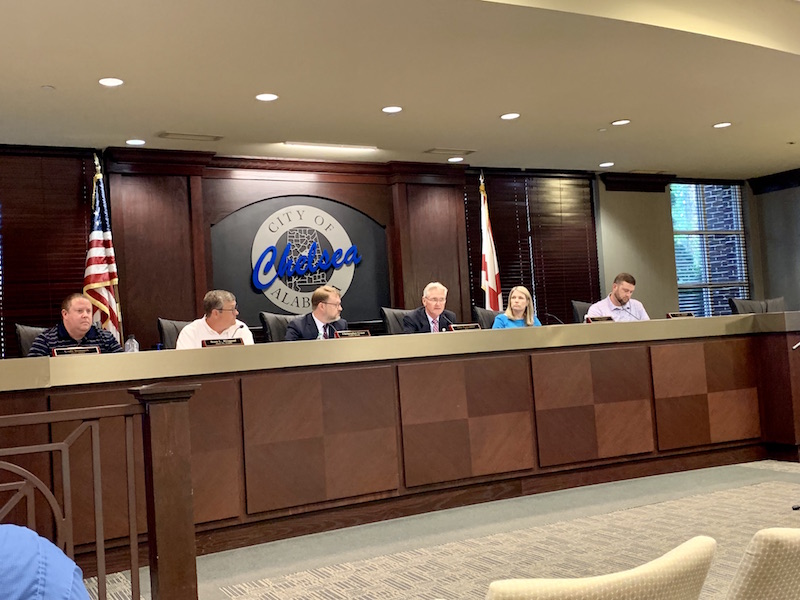 The Chelsea City Council in a 4-2 vote on May 3 passed an ordinance setting a special election to decide whether the city will be able to institute a 12.5-mill property tax to fund the formation of a city school system. (Reporter Photo/Emily Sparacino)

CHELSEA – Chelsea will hold a special election this summer to determine whether the city can levy a property tax to fund the formation of a city school system.

In a 4-2 vote on Tuesday, May 3, the Chelsea City Council passed a proposed ordinance setting the July 12 election, in which the city’s residents may vote on whether to allow the city to levy and collect a 12.5-mill property tax to fund a Chelsea city school system and facility improvements.

Mayor Tony Picklesimer and Councilmembers Scott Weygand, Chris Grace and Tiffany Bittner voted in favor of the ordinance, while Councilmembers Cody Sumners and Casey Morris voted against it.

As with previous discussions about the future of the city’s schools, the ordinance has drawn differing opinions from City Council members and residents in the weeks since it was introduced in April.

Sumners and Morris voiced their opposition to imposing an additional property tax upon residents and forming a separate school system, and on April 27, they introduced an alternative proposal for the schools.

Sumners and Morris said their proposal would not require any additional taxes and would allow the city to partner with the Shelby County Board of Education to address the immediate needs of the schools.

The proposal called for the city to utilize available funds from the current 1-cent education sales tax and current city bonds issued in October 2021 for improvements and renovations at the current schools in Chelsea city limits.

“I do not agree with the option being presented in this ordinance is the best option for the citizens of our city,” Sumners said on May 3. “This is especially true due to the fact that there has been a refusal to discuss or consider alternate options to address the immediate needs of the schools. Additionally, now is not the time to raise taxes on our citizens, especially when there is a viable option that does not require putting an undue burden on our friends and families of Chelsea.”

Weygand said the council has considered other options for the schools.

“This is something that has been worked on for a long time,” Weygand said. “It’s time for the people to choose and to vote on whether they want to take on the school system and a 12.5-mill property tax. It’s up to the citizens of Chelsea.”

Grace said the decision to start a school system is one of the most important decisions the city has faced in its 26-year existence, “a decision so important that the majority of this council believes that it should not make it unilaterally.”

“I’ve also stated publicly that I find myself conflicted on the issue personally,” Grace said. “I would like to see our school facilities given an overall facelift, I would like to see additional teaching units, to create expanded opportunities for our students. I want to ensure that our students with special needs continue to get the attention and care that their individual circumstances require. In short, I support the betterment of our schools and in turn the betterment of the quality of life in our city.”

However, Grace said he did not support the first options presented in the feasibility study last year because of the financial burden they would have placed on residents and the constraints they would have created for the city’s funding of future services.

“The 12.5-mill referendum before us tonight is a civil compromise between me and three of my colleagues,” Grace said. “Should the referendum pass the vote of our citizens, we would still have room for future funding should needs arise. Based on the facts and the positions presented to me, I believe the only action forward is to give the voters this opportunity to decide, and I’m content to accept the outcome of that action and institute the will of the people.”

Bittner said the ordinance was not taken into consideration without much deliberation and counsel.

“Establishing a school system does encompass taking the school system over as a whole, meaning the plan in front of us includes teachers, administration, school buildings, buses, programs as they are today,” Bittner said. “A yes vote for our schools means that we cannot only create a Chelsea city school board and run our schools, but we will have the ability to improve and add onto what we have and what is desperately needed. It has never been the goal to separate from Shelby County and only continue the way it’s been. The bar we are reaching for includes a better plan for our future that will give us a way to better maintain and improve what we have.”

Chelsea is one of three Shelby County municipalities that does not have a municipal property tax; the city’s residents currently pay a 44-mill property tax to the county.

Morris said he has heard from many Chelsea citizens that the burden of an additional property tax would prompt them to move out of the city.

“I have never once wanted this to not be voted on by our citizens,” Morris said. “I would agree with Councilman Sumners that there has not been due deliberation to this subject by the entire council. My encouragement for us as a council and for our citizens is regardless of how the vote turns out, that we show our true colors. Knowing that I’m against it, if it passes, I promise you I will be the biggest supporter of the city school system.”

Picklesimer said his recommendation since the beginning of the school system discussion has been to provide a way for all existing students not covered in the Shelby County Board of Education’s rezoning plan to attend Chelsea schools.

“This council has compromised, we’ve talked, and these people sitting at this table with me, even though we don’t all agree on this particular matter, we are still friends, and we are still neighbors,” Picklesimer said. “I believe it is up to the citizens of Chelsea to make this decision whether we go forward with a school system or not, and I believe in my heart of hearts that every student, whether they live in the city limits of Chelsea or not, that currently attend our schools should be afforded the same opportunity to attend our schools at the same price.”