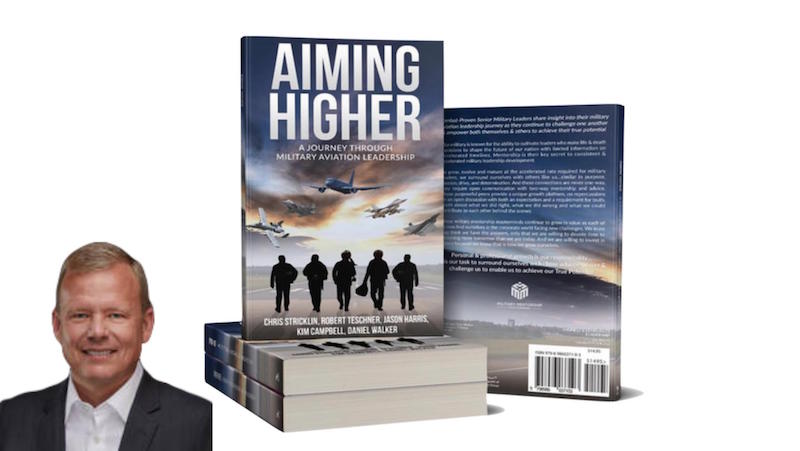 Chris Stricklin, a native of Columbiana, has joined forces with four other former military leaders to write his second book, which is a motivational book about reaching your true potential. (Contributed)

His family has always believed in the Chinese proverb of an invisible red thread, which says there is an invisible thread connecting those who are destined to meet regardless of time, place or Circumstance, but Chris Stricklin didn’t know where this would take him after his time in the U.S. Air Force.

Now, that proverb has led to a wide open new world of mentorship and leadership with Stricklin on the verge of releasing his second co-authored book with a group of people he felt destined to meet.

After spending 23 years and three months in the Air Force, moving he and his family 18 times in that span, Stricklin retired as a colonel in 2017, then turning his attention to keynote speaking, using his experience in the Air Force to motivate members of the business and military world.

That led to the creation of Military Mentorship Mastermind.

“I’m from this area originally. After I retired from the Air Force and came back in the consulting world, I had the opportunity to travel worldwide,” Stricklin said. “One thing I find military people miss the most is the comradery in the military. High performance, helping each other out and driving each other to be their best. That’s what I was looking for.”

With that, he knew there was a platform to share that mindset in motivational form to help businesses, leaders and other retired military personnel across the country.

That was the basis for Military Mentorship Mastermind.

“Our military is known for the ability to cultivate leaders who make life and death decisions to shape the future of our nation with limited information on accelerated timelines,” reads the website’s mission. “Mentorship is their key secret to consistent and accelerated military leadership development. Mentorship is how combat-proven military leaders live and grow with a safety net of vertical and horizontal mentorship, which allows each evolving leader to stand on the shoulders of giants, encompassed by those who have endured the challenge before, embraced by peers who are enduring similar challenges at the same time and empowering the next generation to follow in their footsteps.”

Stricklin said others may drastically outrank and have more experience than himself and others joining the mentorship program, but somebody has to step up and share the lessons they have learned, which led to his latest book.

His journey to writing the book, however, was years in the making and started with him first realizing that he enjoyed writing.

It all started on his 20th wedding anniversary, a monumental moment in marriage that his wife was excited to celebrate. Unfortunately, Stricklin was in Afghanistan and forced to miss celebrating the special occasion.

“I missed it. How the heck do you make up for something like that?” Stricklin said when reminiscing.

“I had never written before, other than in school,” he said. “But I wrote an article, which required a lot of work for a non-writer.”

Even more daunting, he wanted to take it a step further and get the story published nationally, something difficult enough for writers with years of experience.

“I used a military timeline. I gave myself eight months,” he said. “After I wrote it and started sending it out, it got picked up within a month.”

The story took a dive into how marriage is affected by the military, while showing his wife just how much she has always meant to him.

From there, a writer was born.

“What I found was, writing was very therapeutic for me,” Stricklin said.

Wanting to express himself more through writing, he set sights on a book to share his experience following a terrifying ejection from an F-16 during a Thunderbirds Air Show.

This was the first time the red thread played a role in his post Air Force life, as he met Joel Neeb, who survived stage IV appendix cancer.

The book was an inspirational piece about how each survival experience changed their life and motivated others to live an intentional life. It became a best seller on Amazon the week it was released.

Now, three years later, he is on the verge of releasing another co-authored book alongside four other authors.

Titled “Aiming Higher: A Journey Through Military Aviation Leadership,” the book was born when they crossed paths and started sharing stories at different keynote presentations and conferences as motivational speakers.

The group of former military aviation leaders turned motivational speakers then committed to each other and writing a joint book.

“Collectively, we thought there was a much bigger base for this,” Stricklin said. “We committed to each other to write down the three things we mentor others on the most. That was the foundation of the book. Once we wrote our articles and talked about them each month, that was the book.”

The book takes the combat-proven senior military leaders and has them open up to share insight into their journey to leadership in the military, while following them through the challenges faced since, as they continue to empower themselves and others to reach their full potential.

The group has put the entire book together virtually through monthly calls, sharing what they were going through and turning that into a relatable story for what others both in the military and outside the military may be going through.

And just like Stricklin’s first book, as well as everything through Military Mentorship Mastermind, all proceeds will go to charity.

“That proves that it’s people who have served their whole life continuing to serve,” Stricklin said. “That’s important to us. It’s not about us at all. We don’t think we have the answers, if anything, we know we don’t. We do have the questions, however, and the seeds to plant to start conversations about what we go through on a daily basis. It’s not easy to share, but it makes you who you are.”

Stricklin said starting the conversation and helping people realize it is OK to open up about what they are or are not doing is important, and the book helps start that dialect.

“It’s not about the words on the paper, it’s about having the conversation,” Stricklin said. “This book drives people to have a conversation about how they continue their quest for their true potential. Not just the next job the next promotion, the next paycheck. We’re hoping to open those conversations to share with one another and challenge one another.”

He said there has already been a very positive reception, despite the book not being officially released to the public until May 17.

And there is no plan to stop here.

Stricklin said the hope is for the mentorship program to grow and continue sharing stories from military leaders and their perspective on what it takes to be a true leader that reaches their potential.

“If we’re going to do it, why not partner with other people and make a difference,” he said.

One of Stricklin’s favorite lines, which is highlighted early in the book, is “Some wake to an alarm, others wake to a calling. Find yours!”

He said the new book was truly a calling for everyone involved.