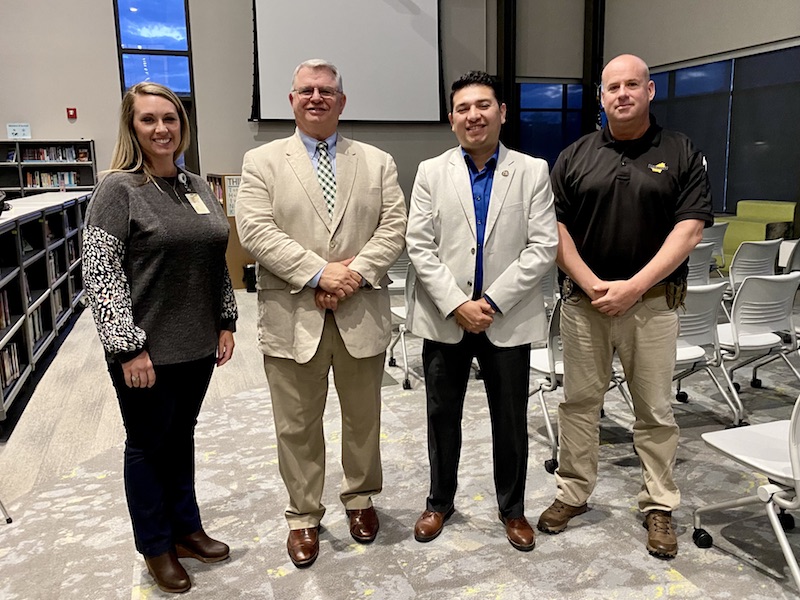 Detective Isaac Cruz of the Pelham Police Department held a special presentation for Pelham City School parents teaching them about the dangers of the internet and how to protect children from online predators. (Contributed)

PELHAM – Pelham Police Department’s Detective Isaac Cruz held a special online safety presentation for Pelham City School parents on Thursday, April 7. The course aimed to inform parents on the dangers their children may be experiencing on the internet.

“We’ve seen an uptick in cases in the past five years, especially during the pandemic during 2020 and 2021,” Cruz said.  “Kids have more access to phones and different devices. We noticed a lot of cases coming in with teenagers sharing nudes and involving social media.”

Cruz said the uptick in cases was what motivated him to communicate with parents and schools about the dangers and consequences that are out there when kids use their phone or a computer.

“The world is at their fingertips and they don’t realize it,” he said. “The studies show that this generation now, anything they want to find they can find on their phone and that’s leading to more problems.”

Main points of presentation covered the basics of social media and opened a discussion on whether social media was good or bad. Cruz said there is always a 50/50 divide of parents who think social media is a good thing but others who are adamantly against it.

“Social media provides good tools and information for us to stay connected, but there is a dark side of social media,” Cruz told the parents. “We also covered the popular social media apps that a lot of the cases we work in Pelham involve Instagram, Snapchat, Discord, but I told them about a website called Common Sense Media that’s a great website for parents that shows parents the most popular website kids are using today.”

In Cruz’s experience, the app that should definitely be avoided by minors is Snapchat.

“I repeated it several times to the parents that Snapchat is of the devil,” he said. “These kids think they can take a video or a picture and send it and then it disappears, but in that 10 or 15 seconds, someone can save it and use it for underhanded purposes. There’s things like that the kids just don’t understand when they start using social media.”

Parents are also responsible for monitoring their children’s access and activity on the internet. Part of Cruz’s presentation involves giving parents the proper tools to make sure their kids aren’t involved in anything harmful on the web.

“A lot of parents think, ‘Oh, I’m going to give my kid my old phone and it’s okay because they can’t use it for the internet,’ but if they have access to Wifi, they will be able to use the internet. And you can access Wifi everywhere, even in church,” Cruz said.

He encourages parents to use Google to their own advantage to learn phrases or language their children may be using that the parents may not understand. He gave parents a list of websites that monitor children’s devices and alerts parents when there is suspicious activity, and even informs parents they have the right to request data packages from apps so they can see everything their kids are sending and receiving.

Cruz said he has seen a significant increase in young children, under the age of 10, who have social media accounts, and parents are an accomplice in that number.

“Of course, it’s up to the parent, but sadly a lot of parents are okay with it because they just don’t understand, and a lot of parents use it as a way to keep their kids out of their way,” Cruz said. “I’ll go up to them and say, ‘You know your child isn’t supposed to have an account that young,’ and they say it’s okay because they helped them get the account.”

Cruz said in his opinion, he thinks it’s going to get worse before it gets better, but if parents would take the initiative to monitor their children’s activities online, it can keep their child safe.

“We have to be responsible and be parents, adults,” he said. “I’m not talking about being a police officer or detective, but being responsible as parents to provide a good education for our children so they understand this. Education starts at home. Every case that I see, I go home and I tell my children what’s going on and I tell them I don’t want to see them get involved with these things because it will come back and haunt you.”