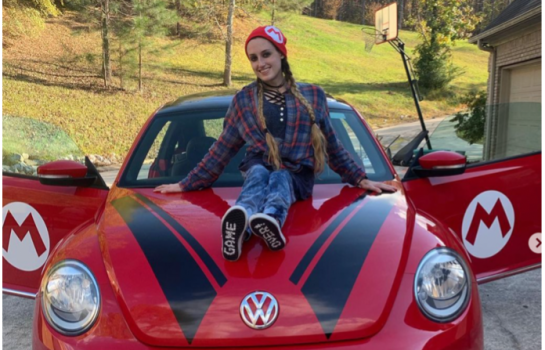 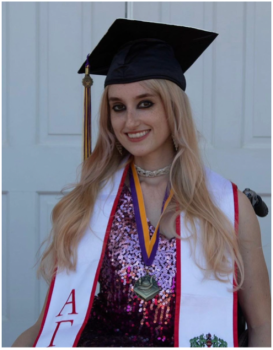 MONTEVALLO – A triplet born with arthrogryposis – a condition where the muscles in her legs never formed – University of Montevallo graduating senior Hope Hodges said she’s never let her disability, or anything else, hold her back from living life to its fullest.

She said her time at the University was wonderful because of the people and relationships she made.

“I love this campus,” she said. “I love the kindness and compassion this campus has. I’m wheelchair-bound because of my disability, and Disability Support Services has made sure that I’ve been well accommodated.”

Long before applying to Montevallo, Hodges knew UM was where she belonged.

Nearly all her teachers were UM graduates and, in her opinion, were fantastic educators. That was enough to point her in Montevallo’s direction.

“I saw the campus growing up as a kid and my teachers would talk about how great it was,” she said. “All my teachers were wonderful, and I was like, ‘these people are amazing so this must be a really good school.’”

What cemented the deal for her is that everyone on her campus tour was kind, the campus is handicap accessible and UM has a game studies and design minor.

“I always knew what I wanted to major in, and Montevallo had it with a game studies minor,” she said.

Hodges’ love of video games started when she was 8. Her parents bought her and her two triplet brothers a Wii with Mario Kart. From there, her interest in video games soared.

While other kids were getting into sports or other physical activities, video games became her outlet.

“It’s a good way to let off steam and have fun. I really love games and can express myself with them.”

Though she still loves Mario Kart, her favorite game currently is Far Cry 6 for Xbox One.

Besides being a serious gamer during her undergraduate years, Hodges has been active in her sorority, Alpha Gamma Delta, and in Catholic Campus Ministries. She said she couldn’t ask for better sorority sisters and being able to connect to people on campus with the same religious beliefs as her has been critical to her wellbeing.

She’s also worked as a resident assistant at New Hall since her sophomore year, an experience she said taught her good time management and helped her meet new people.

But her favorite experience at UM has been College Night. She said she loved the pep rallies and every event involved in them.

After graduating, Hodges will remain at Montevallo as an MBA student. Once she finishes her MBA she hopes to work in project management and lead game projects at Ubisoft. Her dream is to help create the next Assassin’s Creed game, which is her favorite video game franchise.