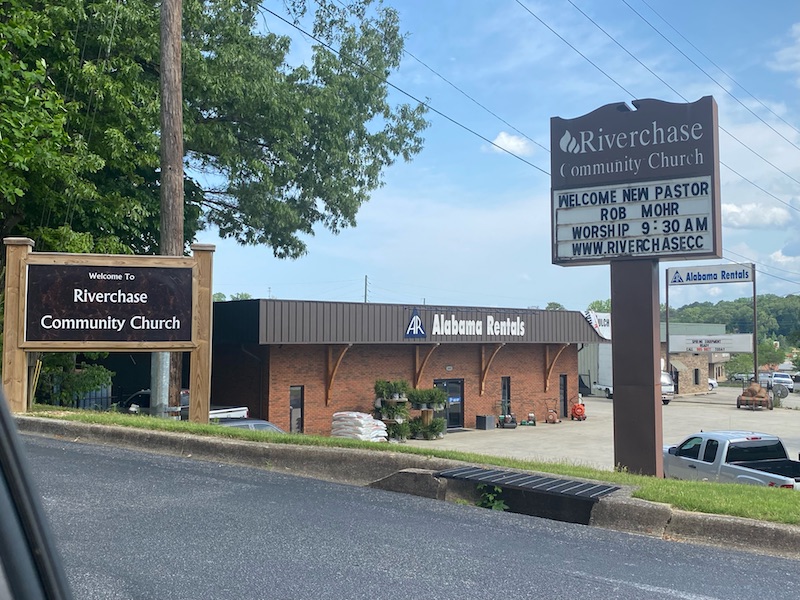 Riverchase Community Church in Pelham welcomes its new pastor Rob Mohr. Mohr has been a pastor for 26 years and is the fourth pastor in RCC’s history. (Reporter Photo/Michelle Love)

PELHAM – Riverchase Community Church in Pelham announced that it is happy to welcome its new pastor Rob Mohr to the church’s family.

Mohr has been a pastor for 26 years. He began as a youth pastor for 12 years then moved on to become a senior pastor, which he has been ever since. He has served in churches all over the country including Georgia, Michigan and Illinois. You could even say it runs in the family as his father was also a pastor as is his father-in-law. Mohr has been married for 20 years and they have three little girls.

Before coming to RCC, Mohr was working in a town in northern Kansas that he says was roughly a population of 2,500 people. When the opportunity first arose, Mohr said at first he was skeptical to make the move to Alabama, but then when the opportunity kept arising, his wife convinced him to look into it further. Mohr said it’s been a good process of transitioning down to Birmingham, and he and his family are excited to be back in the city.

He’s only been there for three days, but Mohr is already optimistic about the changes he and the church have discussed for its future.

“They told me one of the reasons they brought me here was to make some changes,” he said. “We just to bring it down to one point, we just want to help people. We want to see what God wants us to do and where he wants us to go.”

Mohr is only the fourth pastor in the history of the church, and he jokes that he has a more casual demeanor than some pastors. He said he thinks it’s one of the reasons RCC felt he could make a difference.

When approached with the significantly lower numbers of individuals ages 18-35 who don’t attend church, Mohr said it’s something that churches “have not done a good job across the board of paying attention to that age group.”

“It’s across the board, it’s not a particular church or denomination,” he said. “It’s just how it is. You know, after about 27 or 28, people settle down and start having kids and life changes, and then they start to think, ‘Well, maybe I should start going back to church.’ It’s like we wait for them to become a family, but we don’t do anything for them before that time comes. One of the things we’ve already talked about here is establishing things so that when they leave high school and go off to college, they feel comfortable to come back.”

Mohr said he wants people to feel welcome and find a part of the church they click with so they always feel they have a place of support and comfort.

“I don’t want anyone sitting in the back thinking, ‘I don’t belong here,’” he said.

To people who may have had a poor experience with the church, Mohr has as a straight forward message.

“Don’t give up,” he said. “If this isn’t for you, you will find something that works for you. I never want myself or the church to be a hindrance for how people are trying to grow in their faith. The people who left disgruntled, Christ said to love them, too.”

While RCC is a predominantly smaller church compared to others in the area, Mohr said he has big ideas to grow its base in the future. He wants to eventually build an actual worship center and help the daycare center grow. Most importantly, Mohr said he wants RCC to become a force in the community, a place where everyone can find fellowship and guidance to what they’re looking for.

“I want us to be the church in the community where people are like, ‘If you need something, Riverchase Community Church is where you need to go,’ and that’s not to take away from other churches, because every church has its part to play,” he said. “Everybody is looking for something different, whether it’s traditional or contemporary or down the middle of the road. I want us to be the church God wants us to be and also be the church where people will be able to find what they need. Even if they can’t find it with us, we can help them find it with another church.”

“The whole idea with everything here is, I don’t like to be in the box,” Mohr continued. “There’s only two constants in life: God and change…to me that’s the beauty of it. The sky is the limit with what we can do.”