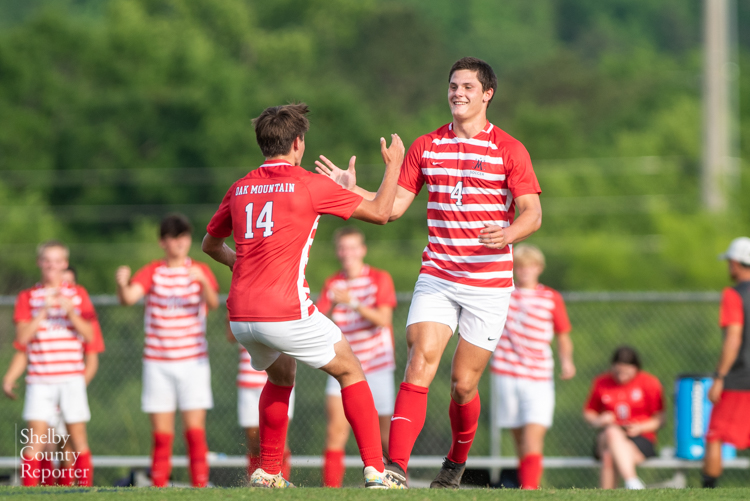 Oak Mountain's Garrett Murphy, No. 4, scored one of two goals for the Eagles in their quarterfinal win against Grissom on Friday, May 7. (Reporter photo/Keith McCoy)

HUNTSVILLE – The Oak Mountain Eagles traveled to Huntsville on Friday, May 6 for what they were hoping would become the first of two straight trips to the city in a week.

Taking on Grissom in the quarterfinals of the Class 7A playoffs, the Eagles were one win away from the Final Four, which also takes place in Huntsville May 13-14.

Looking to advance to the semifinals for the first time since their final of three consecutive state championships in 2017, the Eagles were plenty motivated as the No. 2 team in the state with three consecutive heartbreaking exits from the playoffs.

This year, however, the Eagles were determined to be the one making the run, and that showed against Grissom.

Following a slow start to the game that was dominated by the two defenses, Oak Mountain’s offense found a rhythm in the final 10 minutes of the opening half thanks in large part to Gabe Capocci.

He didn’t score a goal, but he was able to put two balls perfectly on the spot for his teammates.

The first was with 8:50 left in the opening half when he played a ball perfectly ahead to Nate Joiner, who was able to score and put Oak Mountain on top 1-0.

The real momentum boost, however, came a few minutes later.

With Grissom looking to keep the deficit one going into the half against one of the state’s best defenses, Oak Mountain was able to earn a corner kick.

Capocci took the kick and played it in perfectly to Garrett Murphy, who leapt in the air and headed the ball squarely into the lower-right portion of the net before the keeper could react.

That put the Eagles on top 2-0 going into the break.

That deficit felt even larger for the Tigers, who were taking on an Oak Mountain team that had given up no more than two goals on the season and had only given up two on four occasions.

Out of the half, the Eagles played with that confidence.

They capitalized on their stellar defense, while the offense was able to control the ball to keep Grissom from making any late comeback attempt.

Oak Mountain was able to hold the Tigers scoreless again, as the Eagles went on to complete their 13th shutout of the season to advance to the Class 7A Final Four.

With the win, Oak Mountian improved to 17-4-5 on the season and will now take on No. 3 Huntsville at 3 p.m. on Friday, May 13 for a spot in the state championship game a day later. The Eagles beat Huntsville 6-0 in their second game of the season, but Huntsville had gone 17-2-3 since then.