On the prowl: Pelham’s magical run continues to Class 6A semifinals 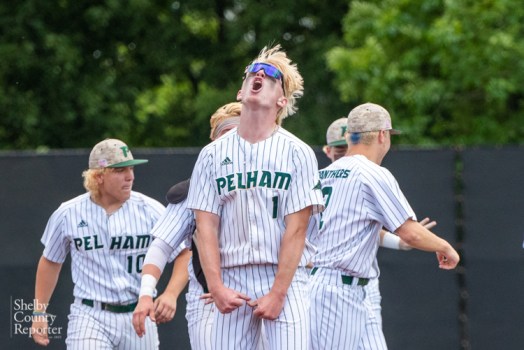 The Pelham baseball team celebrates after beating Hueytown to advance to the Class 6A semifinals on Saturday, May 7. (Reporter photo/Keith McCoy) 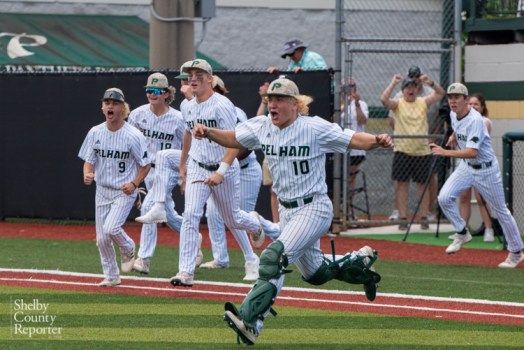 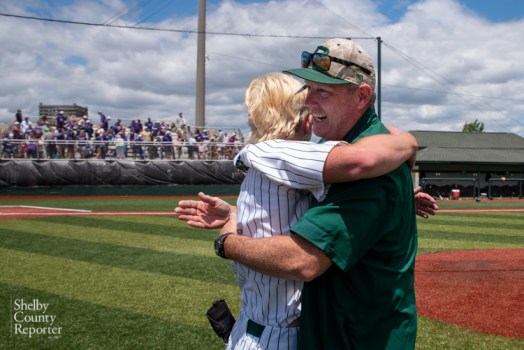 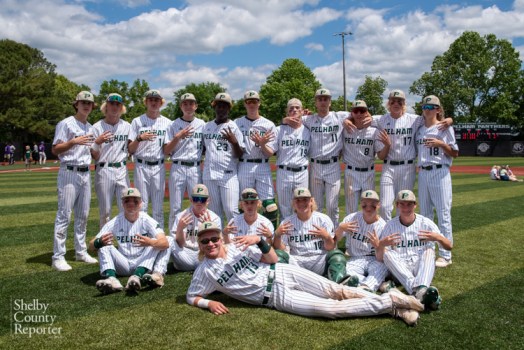 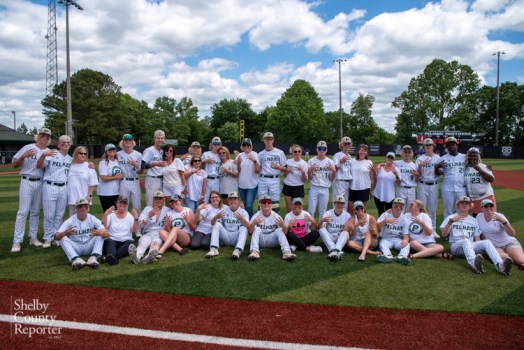 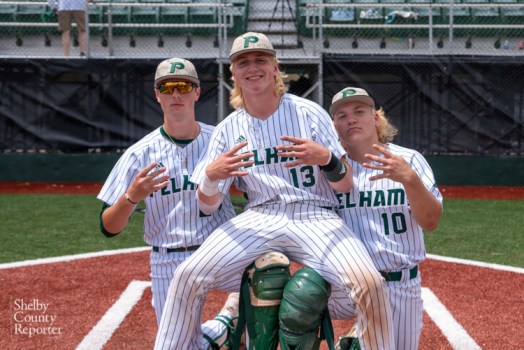 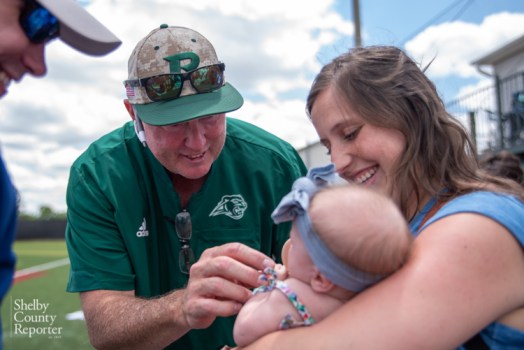 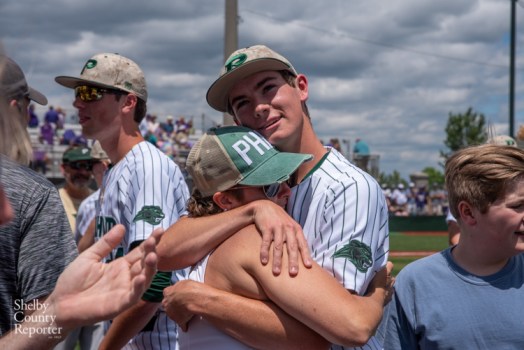 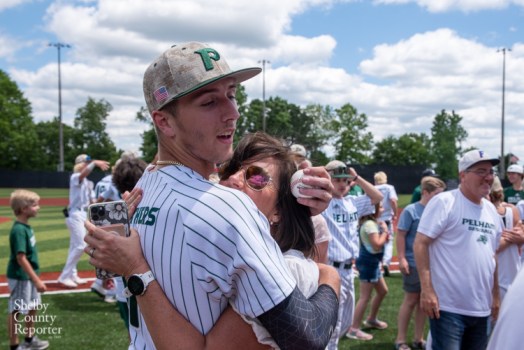 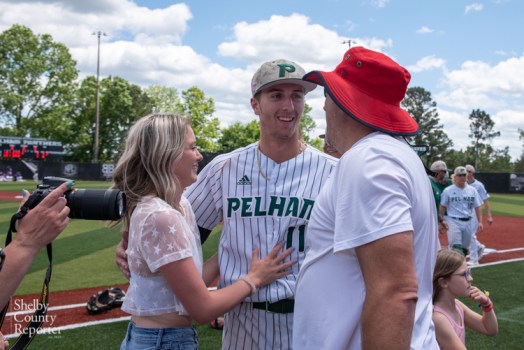 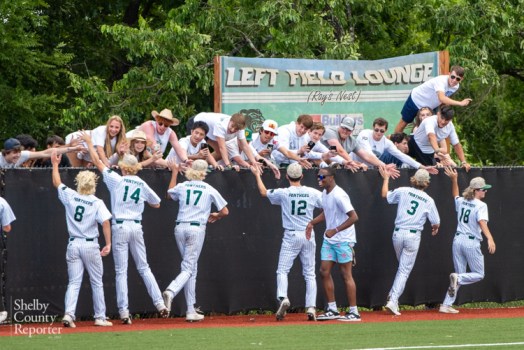 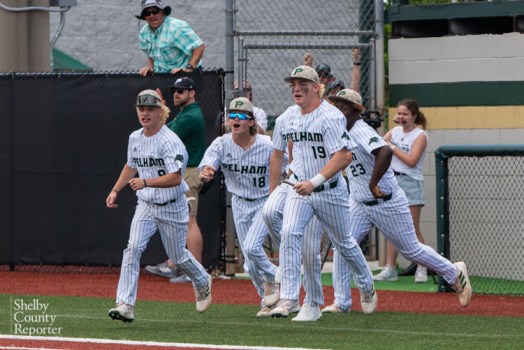 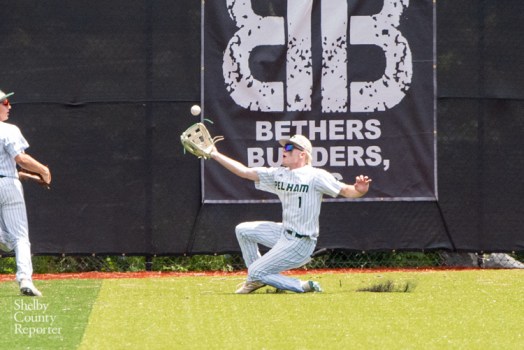 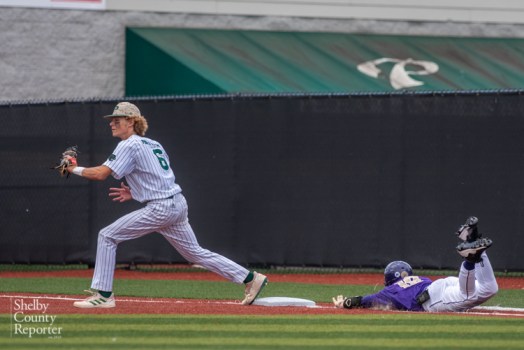 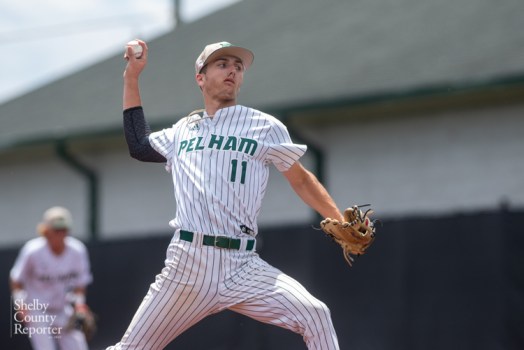 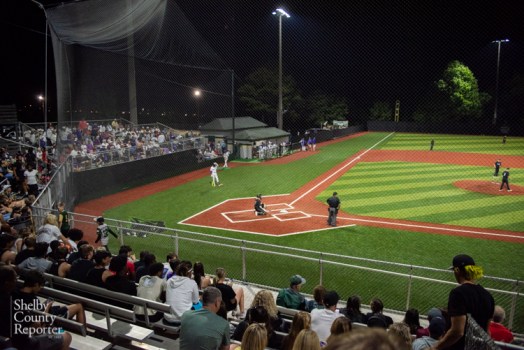 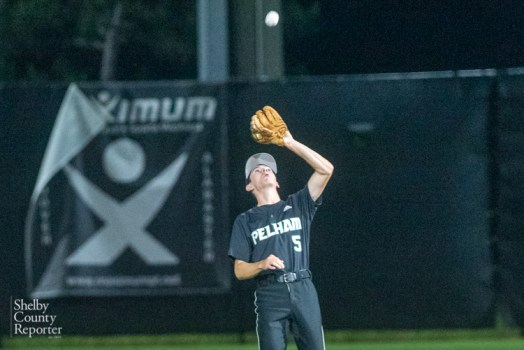 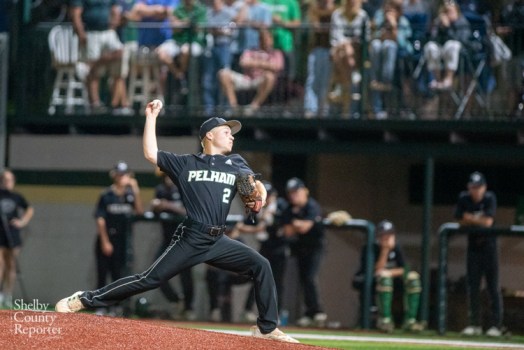 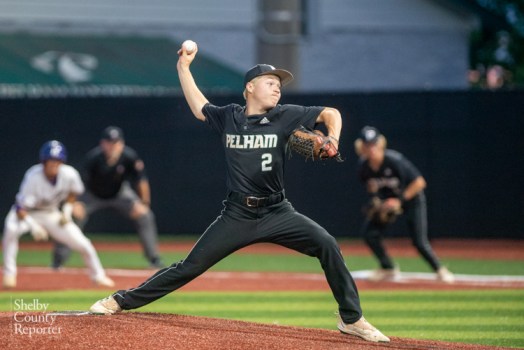 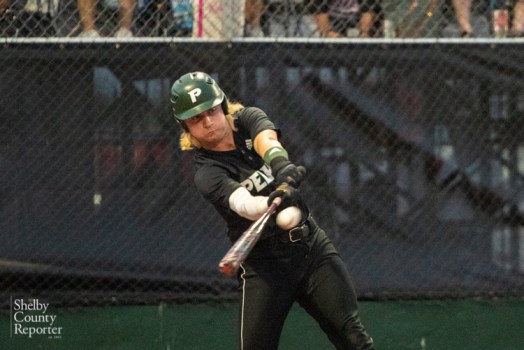 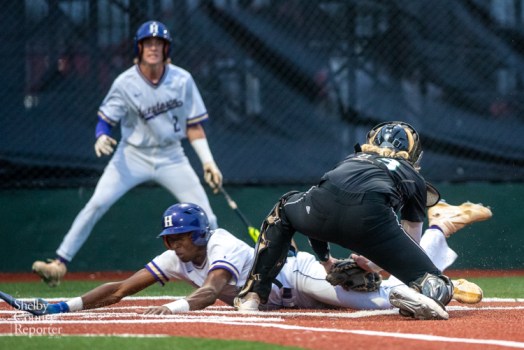 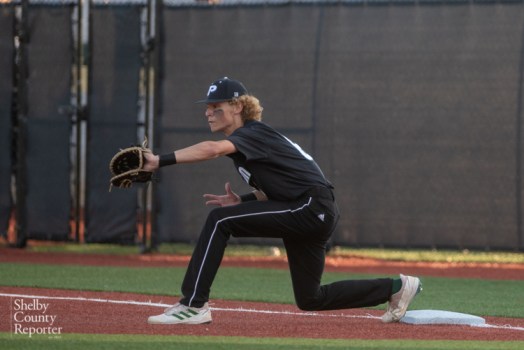 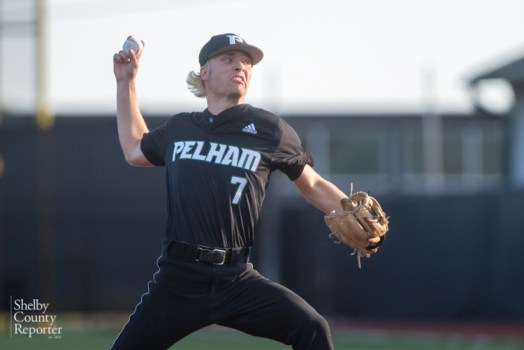 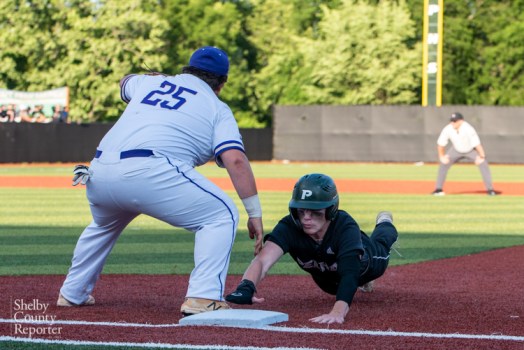 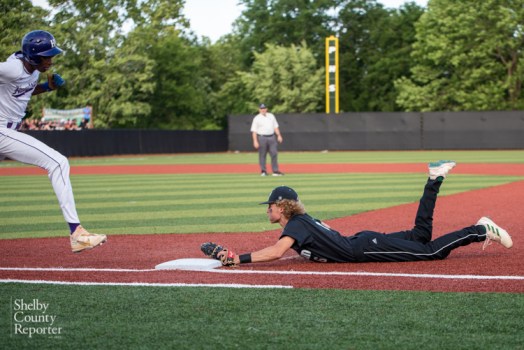 PELHAM – In the midst of five straight losses and at the most important point of the season, the Pelham Panthers were forced to look themselves in the mirror in the second game of a two-game area series with rival Helena on Friday, April 8. And that’s when the team found its real identity.

The Panthers not only won the second game against Helena with a run-rule victory, but they swept Calera to close area play and advance to the playoffs, while they won three of four to end the regular season.

Playing with a newfound looseness, Pelham carried that momentum into the postseason with a sweep of Lee by a combined score of 24-0 in the first round and then came back to beat No. 2 Saraland in a best-of-three series a week later with a clutch 2-0 win in game three.

Now, the Panthers are headed to the semifinals of the Class 6A playoffs for the first time since 2015 as their magic continued against a second straight top-five opponent May 6-7.

Taking on the Hueytown Golden Gophers for a spot in the semis, the Panthers took game one 4-3, lost game two 3-0 and came back for the second week in a row to win game three 7-4 to advance.

“It just speaks about our kids and their character,” head coach Sean Anderson said as players celebrated behind him following the rubber-match victory. “They don’t quit. They found something 2/3 of the way into the year that they have bought into and have taken off with it.”

And for the second weekend in a row, it was an impressive Saturday performance that made the difference.

One week after upsetting Saraland, the Panthers took back to the field on Saturday and took an early 3-1 lead in the bottom of the first.

JD Wilkins lead off the inning with a double and quickly scored after an error on a bunt from Cody Bethers ended with an error.

Then, after a single from Logan Green and a pop out, Josh Calvert drove home two more with a single up the middle that gave the Panthers a two-run advantage.

That started a trend in the first four innings, as Pelham had an answer for every run the Golden Gophers scored.

After a scoreless second inning, Hueytown drew within one in the top of the third.

Pelham, however, came right back with one in the bottom half when Calvert hit a double to drive home Christian Pritchett, who led off the inning with a double.

Up 4-2, the Panthers saw their lead disappear in the top of the fourth when Hueytown brought home two runs to force a 4-4 tie.

But then came the difference-making inning.

Yet again, Pelham had an answer. After a fly out led off the inning, Clayton Mains and Wilkins had back-to-back hits to put two in scoring position.

Bethers then stepped up and drove a ball down the right-field line that brought home both baserunners to put the Panthers on top 6-4.

Pelham then loaded the bases with one out, which allowed Zack Egan to bring home another run on a ground out.

That put the Panthers on top 7-4 through four, as they shifted to Wilkins and the defense to protect the lead.

Hueytown put two on in the top of the fifth, but a strikeout from Wilkins to end the inning also ended the threat.

From there, the Panthers coasted. Wilkins and the defense forced back-to-back 1-2-3 innings in the sixth and the seventh, which featured two great defensive plays in center field from Mains to prevent any damage.

Following a sliding catch from Mains in the top of the seventh to put two down, Wilkins forced the next batter into a line out that ended the game and sent the Panthers into celebration mode.

“JD has been really good on the mound for us in game threes, our defense has been really good and we’ve had clutch hits when we need to have clutch hits,” Anderson said of the team’s effort the last two Saturdays. “David White, my assistant coach and our pitching coach, is phenomenal with setting hitters up and calling pitches. These guys trust him to tell them where it is supposed to be thrown. We don’t function without David either.”

Wilkins had a 3-for-4 game at the plate and got the complete-game win on the mound. He allowed four runs, one of which was earned, on four hits and one walk, while he also finished with three strikeouts.

Calvert drove home three runs on two hits, while Bethers added two RBIs on one hit. Egan also had an RBI, while Pritchett, Green and Mains all had one hit.

Anderson said he is proud of how this team has come together the last few weeks and that it created a special environment in the Saturday win.

“It’s really good to see Pelham High School and Bobby Hayes Stadium filled like this,” he said. “It has been a long time, but these guys have brought back to Pelham what used to be here and what the guys previous to them built upon. These guys have just taken it to a new level.”

Pelham had a similar win in the opening game of the series, taking a 3-0 lead in what eventually became a 4-3 victory.

Hueytown came back to tie the game 3-3 through four innings, but an RBI double from Pritchett in the bottom of the fifth ultimately made the difference.

He also got a complete-game win on the mound, allowing three runs, two of which were earned, on seven hits and one walk. He finished with two strikeouts.

Green added one hit and one RBI in the win, while Egan had two RBIs.

Pelham lost the second game 3-0, only totaling one hit in the loss, but Egan was able to settle in on the mound after giving up three runs in the first inning. With that, the Panthers saved Wilkins fully for Saturday.

Anderson said his team has responded well after early-season struggles, and their record coming into the postseason means nothing.

“At the beginning of the season, we didn’t always do the stuff we’ve done the last few weeks,” he said. “Our record, I know it’s not great, but it really doesn’t matter, because right now, we’re 6-2 in the playoffs. If you look at what we’ve done the week after spring break until now, it’s pretty good.”

With the win, the Panthers have now beaten back-to-back top-five opponents and advanced to the semifinals where they’ll travel to Hillcrest-Tuscaloosa.

It will mark Pelham’s first trip to the semis since the 2015 season when the Panthers advanced to the state championship series.

“It’s no different. It’s just belief. Pelham over self and pitch by pitch,” Anderson said of what is ahead.