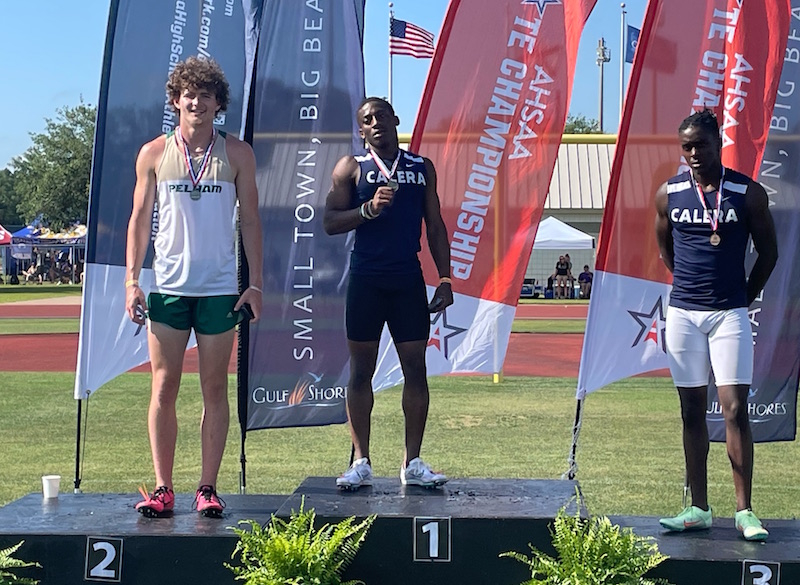 Three local athletes stand on the podium after finishing in the top three in the 400-meter dash at this year’s state championship meet, including Calera’s Braylynn Farrington in first, Pelham’s Avery Childress in second and Calera’s Christopher Thomas in third. (Contributed)

GULF SHORES – There were only two local winners at this year’s Class 6A Outdoor Track and Field State Championship Meet, and both winners hailed from Calera High School.

Capping off special track and field seasons, Braylyn Farrington and Jordan Bray both claimed state titles in the 400-meter dash.

Farrington’s win for the boys was thanks to a speedy time of 48.49 seconds, as he finished the season with three of his best performances. After finishing second in his first three meets of the season in the event and sixth in the fourth one, he set a personal record in his fifth meet at 47.40 and went on to win his final three in a row, including the state championship.

In addition to the championship win, he also claimed a podium finish in the 200-meter dash. He took home third in the event with a time of 21.93 to cap off a season in which he finished on the podium in the event in three of four meets.

For Bray, she took home the championship thanks to a time of 56.50 seconds. It completed a season in which she finished first in the same event in seven of her 10 meets this season, including the last three in a row.

While there were no other individual champions from Shelby County teams at this year’s state meet, there were still several other podium finishers and top-10 finishes.

One of the biggest highlights locally came in the boys 400-meter dash thanks to the county occupying all three spots on the podium.

That marked the final podium finish for the Eagles, who got finishes of seventh from Christopher Thomas in the 200-meter dash and fifth from the 4X400-meter relay team.

However, it was just the beginning of a strong meet for the Pelham Panthers, while Briarwood, Chelsea and Helena all had noteworthy performers as well.

Pelham totaled 12 top-10 finishes, the most of any local team, while that included two podium finishers.

Childress and Corey Perkins were the two podium finishers, as each just missed out on individual state championships.

Competing in the high jump, Perkins finished second and was just 2 inches off the winning pace. He cleared 6 feet, 2 inches, while Decatur’s Jayden Brown topped 6 feet, 4 inches to win the title.

Both he and Childress also finished inside the top 10 in the long jump. Perkins finished ninth after reaching 21 feet, 3 inches, while Childress totaled 20 feet, 9.5 inches to finish 10th.

Individually, Devon Adams joined Childress in the top 10 in the 400-meter dash, finishing ninth with a time of 51.20 seconds.

As for the girls, it was the three relay teams that finished inside the top 10.

The Helena Huskies didn’t have a winner at the event, but they did have seven top-10 finishes, including one podium finish.

That podium finish came from Brooklynn Kirksey, who capped off a strong year by finishing third in the long jump after totaling 17 feet, 9.75 inches.

Behind her, Lamaria Bennett had a strong day for the girls, finishing fifth in the long jump with a distance of 16 feet, 11 inches and eighth in the 100-meter dash with a time of 12.97 seconds.

As for the boys, the 4X800-meter relay team finished in sixth with a time of 8:20.62, while Sammy Ratley finished seventh in the javelin with a distance of 155 feet, 4 inches.

McPhail and Brush were unable to claim state titles this year, but each had a podium finish and an additional top-10 finish.

In addition to McPhail, McCulla and Rigor both finished inside the top 10 of their respective events. McCulla finished fifth in the pole vault finals after clearing 10 feet, 6 inches, while Rigor did so in the 300-meter hurdles with a time of 47.25 seconds.

The Briarwood Lions also had three high finishes, as three different athletes finished inside the top five, including one with a new school record.

Riley Margene finished fourth in the pole vault for the boys after clearing 12 feet, 6 inches, while the girls were led by Sallie Montgomery and Ansley Murphy with fifth place finishes in their events.

Murphy finished fifth in pole vaulting after clearing 10 feet, 6 inches, while Montgomery set a new school record in the triple jump with a distance of 36 feet, 6.25 inches.

On the prowl: Pelham’s magical run continues to Class…