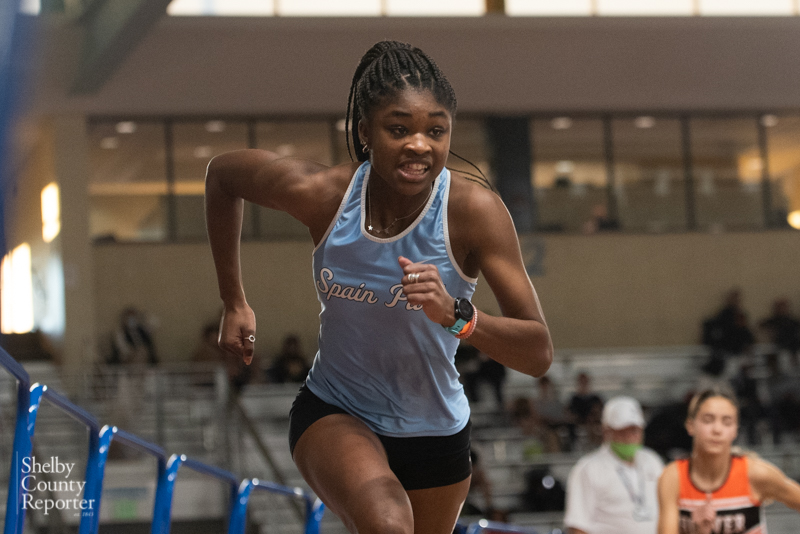 GULF SHORES – For the second year in a row, Spain Park’s Mackenzie Culpepper ended the outdoor track and field season as a state champion.

Competing at this year’s Class 7A Outdoor Track and Field State Championship Meet, Culpepper not only brought home one title, but she won two and finished on the podium in a third individual event.

She then also finished second by eight seconds in the 1,600-meter run. She finished with a time of 5:04, while Vestavia Hills’s Crawford West won with a time of 4:56.56.

It marked an impressive two-year stretch for the Spain Park runner, as well as the completion of a redemption path after she finished as a state champion in the 400-meter dash last year but just off the podium in the other two events.

Culpepper’s impressive showing was just part of an impressive event for both Spain Park’s girls and boys.

The girls also got a podium finish from the 4X400-meter relay team thanks to a speedy time of 4:00.52, which was good enough for second.

As for the boys, they had two podium finishes and seven total top-10 finishes.

John Landers was the highest individual finisher after he claimed second in the pole vault finals. He cleared 16 feet, which tied for the highest mark just in more attempts than state champion Collin Pate of Hoover.

Harrelson’s top-10 finish came in the discus throw where he finished eighth after totaling 135 feet, 7 inches.

The Thompson Warriors capped off the season with 12 finishers inside the top 10 at the state track meet, while five of those 12 finishes came on the podium.

Of the podium finishes, Akasha Dudley and Bradley Franklin accounted for four of them.

He claimed the highest finish for any Thompson athlete at the event in the 300-meter hurdles thanks to a time of 39.06 seconds earning him second and finishing less than a second off the top spot.

In the 110-meter hurdles, he finished third after crossing the line with a time of 14.72 seconds.

The girls also had an addition podium finisher thanks to Skye Smith in the 300-meter hurdles. She ran the event in 51.40 seconds, which was good enough for third.

Behind her and Dudley, the Warriors got finishes of fourth in the javelin from Whitney Clark and fifth in the 100-meter hurdles from Trinity Williams.

Clark totaled 114 feet, 3 inches in the javelin throw, while Williams finished her race with a time of 15.66 seconds.

Behind Franklin the boys events, Gavin Horton and Chris Sims both had impressive showings in the pole vault finals.

Eli Sutton added a finish of sixth in the triple jump after totaling 44 feet, 6.5 inches, while Parker Mitchell finished seventh in the discus throw thanks to a distance of 139 feet, 6 inches.

Oak Mountain had 15 total finishers inside the top 10, including one podium finish from Walker Hughes.

Hughes finished runner-up in the javelin throw behind a distance of 174 feet, 3 inches. He finished just behind Smiths Station’s Tavin Womack, who won the title with a distance of 176 feet, 6 inches.

Behind him, the boys team got top-five finishes from six other athlees.

Quest Agee, Ethan Hammett and the 4X400-meter relay team all finished fourth in their respective events.

Faith Scardino was the highest individual finisher for the girls after claiming seventh in the 3,200-meter run with a time of 11:46.37.