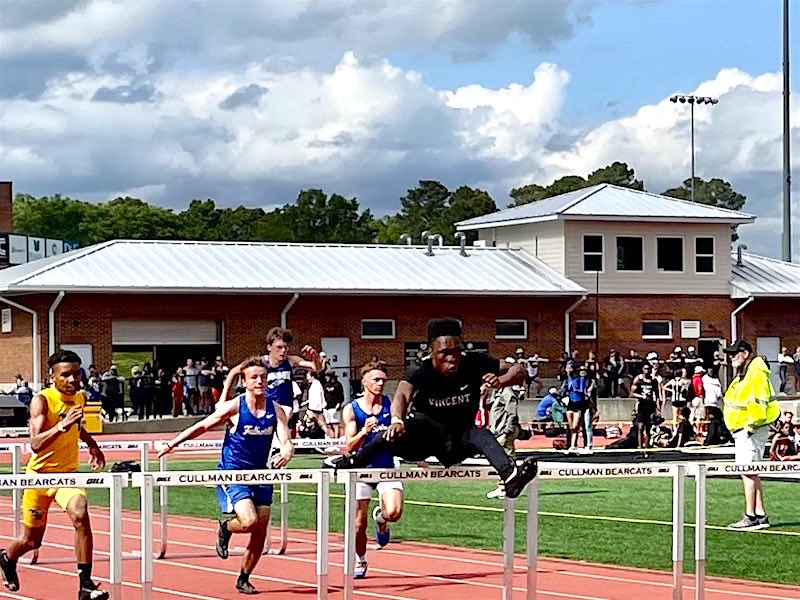 Vincent’s Jordan Eatmon competes in one of his two state-championship hurdles events during this year’s outdoor state championship meet. (Contributed)

It was a special year for Jordan Eatmon at the 2022 Class 2A Outdoor State Track and Field Championship Meet at Cullman’s Oliver Woodard Stadium May 6-7.

Capping off a special 2022 outdoor season, the Vincent High School runner not only won one event, but was able to bring home an individual state championship in two separate events for the Yellow Jackets.

Competing in the 110-meter and 300-meter hurdle events, Eatmon claimed the top spot in each event to earn two state titles.

He finished on the podium in each of his 110-meter hurdle events this season, while the state meet saw him set his two personal best times.

In the prelims, Eatmon ran 15.58 seconds to win the preliminary race before then coming back and finishing just off that pace with a time of 15.62 seconds to claim the championship.

He also set new personal records in the 300-meter hurdles, finishing his prelim event with a personal record of 41.04 seconds before coming back and finishing the championship race with a time of 41.32 seconds.

He was also joined by teammate Jayden Roberts in the 110-meter hurdles.

After Roberts finished second in the prelims, he came back and took home a podium finish of third in the finals with a time of 16.74 seconds.

In addition to those two athletes, Evan Swain added another top-10 finish for the Yellow Jackets in the shot put after totaling 43 feet, 6 inches.