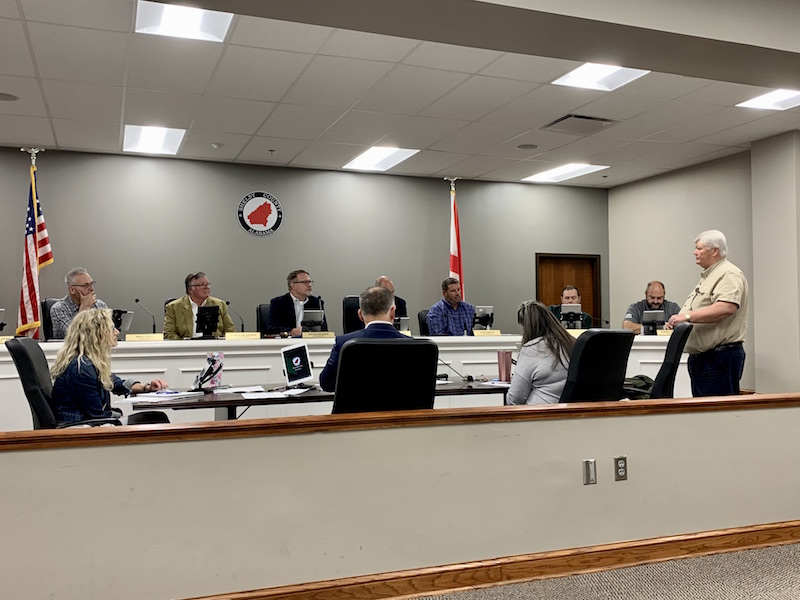 Shelby County Engineer Randy Cole, right, speaks to the Shelby County Commission on Monday, May 9 about his plans to retire in September after 31 years with the county. (Reporter Photo/Emily Sparacino)

Shelby County Engineer Randy Cole shared the announcement of his plans to retire Sept. 1 at the Shelby County Commission meeting on Monday, May 9.

As the county engineer, Cole manages an engineering staff of licensed professional engineers, certified bridge inspectors, a road department with about 90 employees and an annual budget of nearly $19 million.

“We’ve been able to do a lot of good things and couldn’t have done that without the commission,” he said. “You have supported everything we’ve tried to do. I think our transportation system reflects that. As a county entity, we’re the envy of the state.”

Cole said more than 100 bridges have been replaced since he started working with the county in 1991.

“That’s not so much a credit to me as it tells you how much need we had to replace bridges, and we’re still replacing them,” Cole said. “We’re just now opening up the new bridge on County Road 52 over the Cahaba River. Very soon we’ll open up the new culvert on 52 over Buck Creek, and the one over Ebenezer Swamp on County Road 24. We couldn’t have done this without the commission’s support, so thank you very much for that.”

Commission Chairman Kevin Morris commended Cole for his three decades of dedicated service to the county.

“When you’re just reading the first sentence of Randy’s retirement announcement, you pause because you think about 31 years of service,” Morris said. “That’s an anomaly nowadays in any industry that you’re in. Most people don’t get to double digits, and most people definitely do not invest a lifetime. On behalf of this group, we’re very thankful for your service and look forward to you continuing that service until September 1.”

“The number of homes and subdivisions that are fed by the transportation system that Randy has managed for 31 years, it would be astounding to see how many people are served and how many new homes have come into this county under his leadership,” Scroggins said.

“He’s been a great county engineer,” Ellis said. “Randy, it really has been a personal pleasure. Thank you so much for all you’ve done for this county.”

Chelsea Mayor Tony Picklesimer also expressed gratitude to Cole and the commission for their help with road projects in the city.

“We’ve been friends for over 50 years, but in my five years as mayor, significant improvements in the city of Chelsea at his hand,” Picklesimer said. “We have projects going now. The support is never-ending, and I appreciate it.”