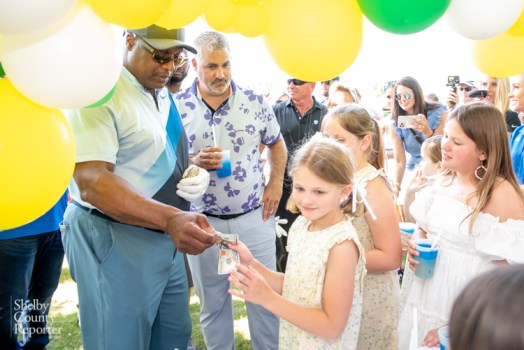 Bo Jackson hands $100 to a girl at a lemonade stand on the ninth hole at Greystone Golf & Country Club during the Celebrity Pro-Am on Wednesday, May 11. (Reporter photos/Keith McCoy) 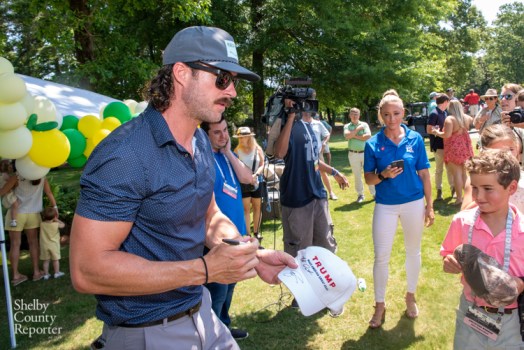 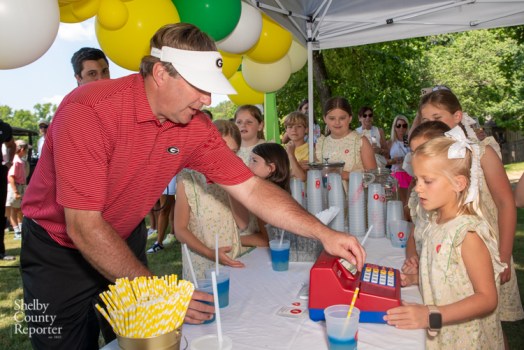 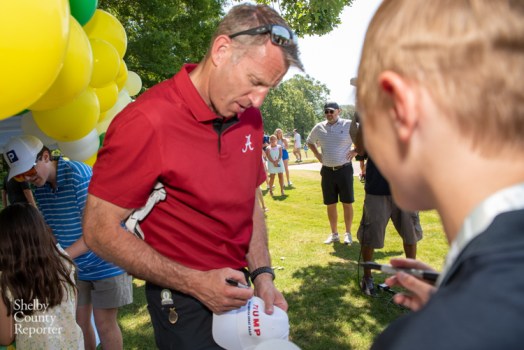 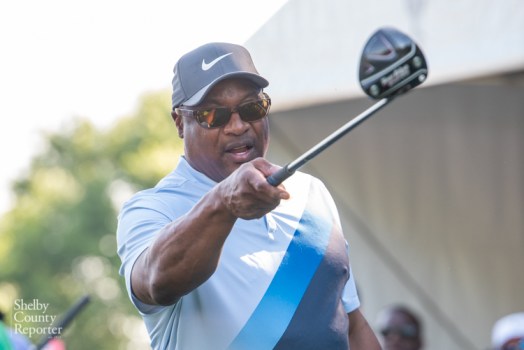 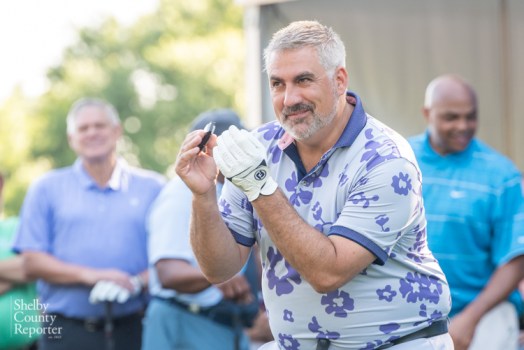 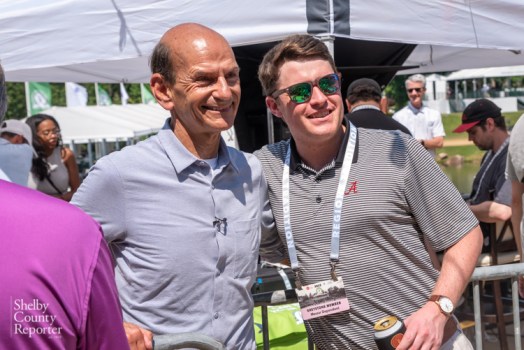 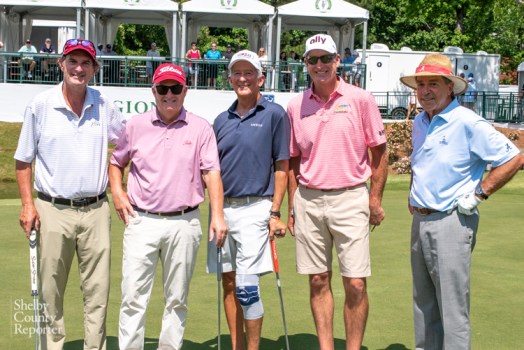 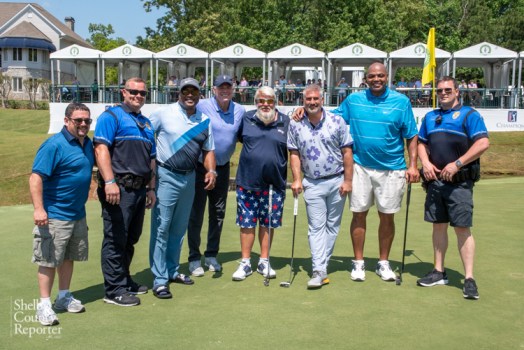 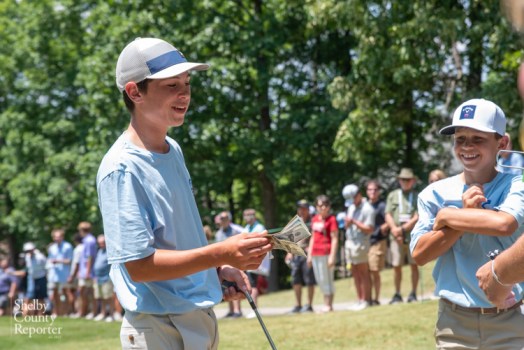 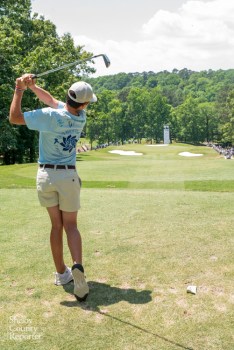 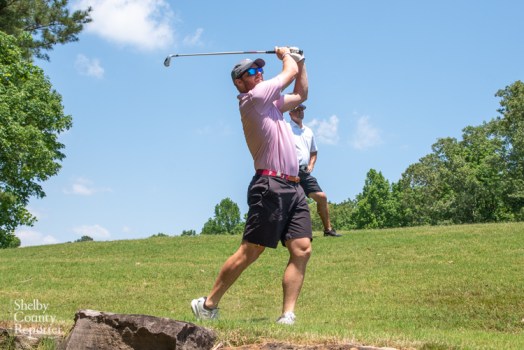 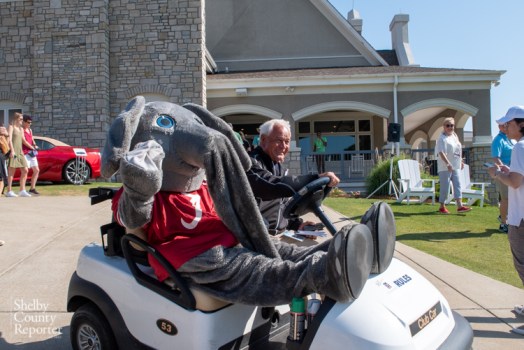 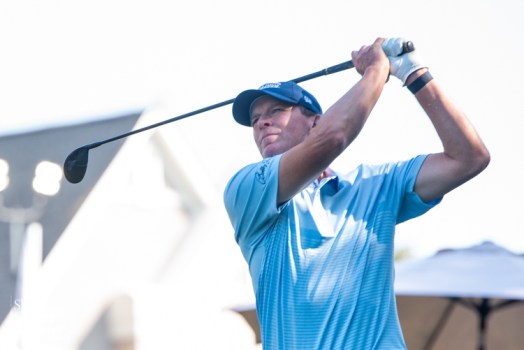 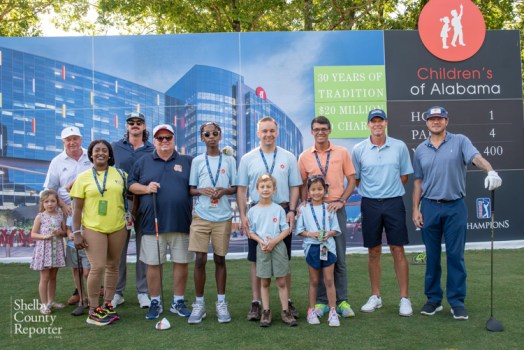 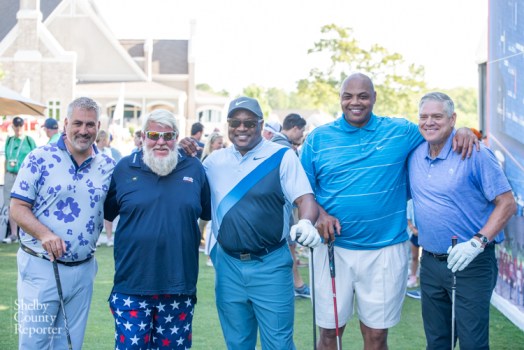 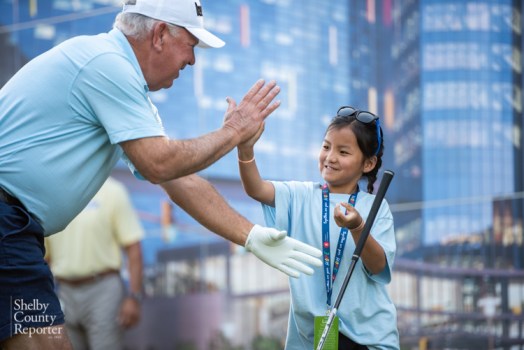 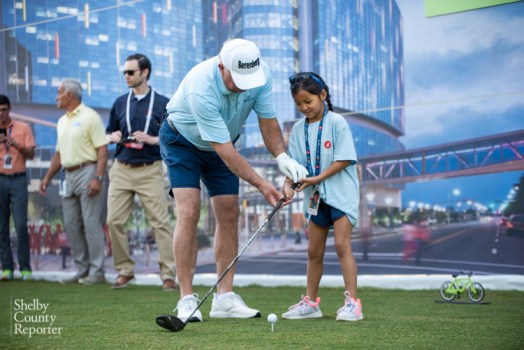 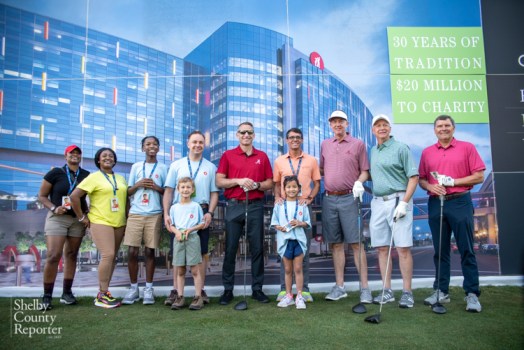 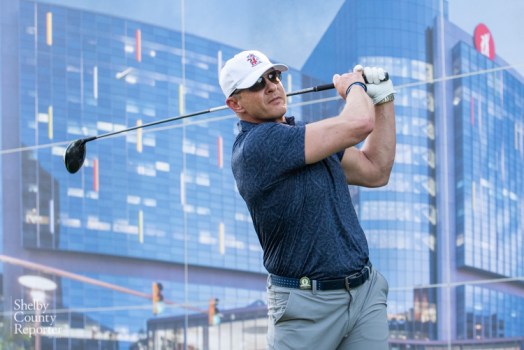 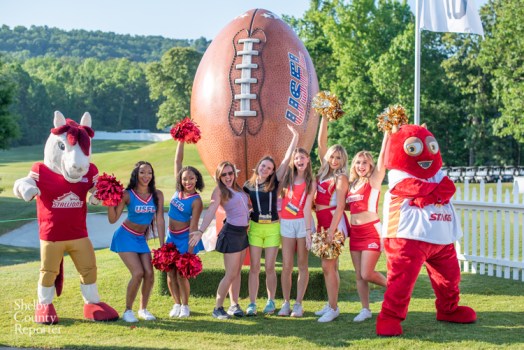 HOOVER – Standing alongside John Daly and Taylor Hicks on the first tee at Greystone Golf & Country Club on Wednesday, May 11, Bo Jackson asked a child from Children’s of Alabama if he had any candy.

Getting a laugh from the kid, it was another moment in a longstanding tradition to kick off the annual Regions Tradition.

Jackson was one of several celebrities and famous sports figures in attendance at the event, while at the same time he was doing that, Hicks, an American Idol winner and famous musician, handed the same boy one of his famed harmonica before sharing a joke of his own.

Daly quickly responded with, “No, no.”

It was part of a special day at the golf course, as that group, which also featured Charles Barkley, was one of many to take part in the annual Regions Tradition Pro-Am.

Daly also gave two kids $500 on the 17th hole after asking one to take a shot from the professional tee box on the par-3 and the other to make a putt. If the shot hit the green and if the putt was sunk, he would give each $500. Both were extremely close, but even with their misses, he dished out $500 and a few jokes.

Not only do the celebrities get to play alongside the professional from the PGA Tour Champions before the season’s first major championship, but they also get to greet the Children’s of Alabama ambassadors on the first tee.

Saban continued his tradition of sharing a golf ball with an Alabama “A” logo on it with them, while each celebrity greeted them with fist bumps, high fives and pictures.

For Barkley and Jackson, it also offers a chance to come back home to be around where they grew up with Barkley a Leeds legend and Jackson a graduate of McAdory.

“For me, y’all know what Leeds and Birmingham means to me,” said Barkley, who is also in a busy stretch of covering the NBA playoffs. “I don’t mind getting up early and having to rush back and be on television tonight. This is great for the state and the city, and to play a small part in it, I’m happy to do it.”

It also gave the two Auburn legends a chance to share some time together despite their busy schedules.

“It’s always exciting to play with Barkley. It’s like a box of chocolates, you never know what you’re going to get,” Jackson said. “I’m quite sure it’s going to be a memorable day. This is home for us. For us to come back here to do this, it’s fun for us. We get to see people we don’t normally see because we’re all over the planet doing things and living our lives and being grandpas.”

Barkley added that it was special for the two getting to share the course together as two legends from Auburn.

There were also plenty of jokes shared and friendly banter between the celebrities, many of who are graduates, coaches or fans of rivaling sports teams.

That, however, didn’t stop them from having friendly conversation, including one between Oats and Barkley.

“We talked a little about Herb Jones and the year he had. He’s a really good guy,” Oats said. “He texts me during the year. He’s an Auburn guy, but shoot, I liked him a lot growing up. I watched him play a lot. He’s been great.”

And Barkley has had his eye on Oats as a talented coach for some time, which helped spark a friendship between the two.

“I’m a fan of his,” Barkley said. “When I’m studying for March Madness, I look at the coaching. I remember telling people, Alabama has a terrific basketball coach coming. When he was at Buffalo, I was looking at his schemes, and I was like, ‘Wow, this dude can really coach.’ I met him and we just hit it off.”

As for their skills on the golf course, they all had differing views on how the day would play out.

Oats added that it was just his third round this spring due to a busy schedule with spring recruiting and the transfer portal. He said he had a lot more practice coming into last year’s pro-am so this year was a wildcard.

Harsin, however, was optimistic in his mindset.

“I drove up here, a couple hours, and it was all just positive affirmations, right,” he said. “I’m going to be the best golfer on the course, I’m going to hit it straight, so we’ll find out. I’m just going to enjoy it and have fun. This is fun. It really is. I’m excited to be back here. I enjoyed this last year and love what it stands for. The people here are fantastic and everybody out here is just very supportive.”

Regardless of how each performed, the day was all about highlighting Children’s of Alabama and the charitable contributions that the Regions Tradition is responsible for each year.