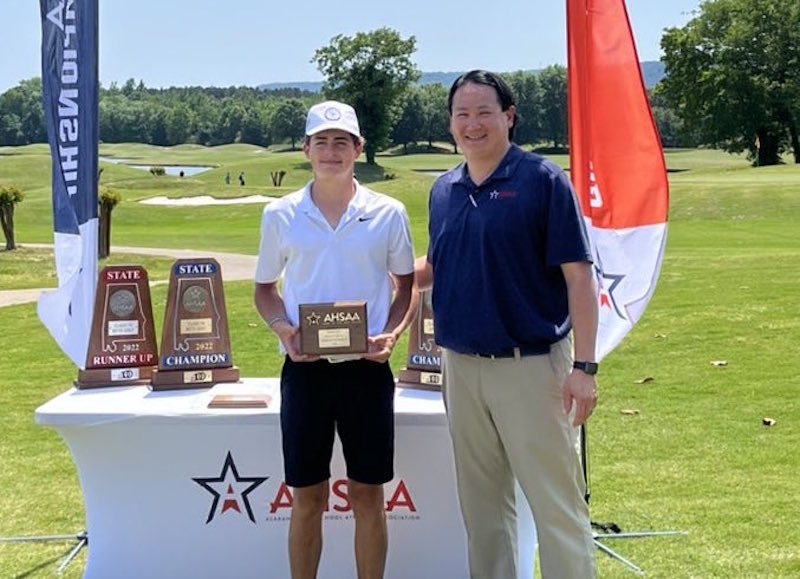 Spain Park freshman Chase Kyes finished second at the 2022 Class 7A State Golf Tournament, ultimately shooting the lowest round of the tournament in his second round. (Contributed)

HUNTSVILLE – Still a freshman at Spain Park High School, Chase Kyes continued to make his name known as one of the best golfers in the state of Alabama May 9-10 at Huntsville’s Robert Trent Jones Hampton Cove Golf Course.

Competing in the Class 7A State Golf Tournament as an individual, Kyes fired a 5-under par round of 67 in his final round on Tuesday to earn a runner-up finish at this year’s tournament.

It marked an impressive bounce back for Kyes, who shot an opening-round score of even-par 72 on Monday.

That put him four shots off the pace in a tie for second following his opening round.

During the round, he had pars on his first eight holes, but was forced to grind for the majority of the round.

He made a bogey on the par-4 ninth to fall back to 1-over par, but he bounced back on 12 with a birdie.

After giving that birdie back one hole later, he came through with a birdie on the par-5 15th hole to quickly get back to even par before finishing off with three consecutive pars.

That put him four shots off the pace set by Jack Mitchell of James Clemens, who shot an opening-round score of 4-under 68.

Day two, however, was a different story for Kyes.

While Mitchell matched his opening-round score with a second consecutive 68, Kyes pushed as hard as he could.

The freshman for the Jags shot the lowest score of the tournament with a 5-under 67, which ultimately put him three shots shy of a chance to claim his first state championship.

Still, he finished solo second and made enough birdies to get to 7-under, but ultimately had two bogeys on 14 and 18.

Kyes started the round with a 3-under score of 33 on the front nine, birdieing three of his final four holes. He then carried that streak over to the back nine by birdying three of his next four holes as well.

At one point, he had four in a row and made six in an eight-hole stretch.

He also had a narrow miss for birdie on one and a lip out for birdie on two that would have put him even deeper under par for the round.

Kyes ultimately finished three shots back of Mitchell in his second consecutive appearance at the 7A state tournament.