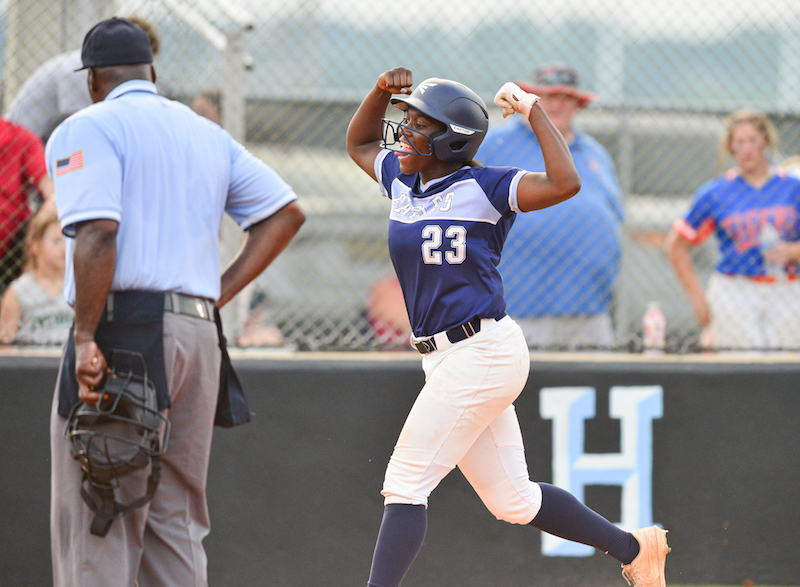 MONTGOMERY – The Calera softball team didn’t shy away from one of the biggest and most nerve-wracking moments in school history on Wednesday, May 11.

After going 1-1 during the opening day of regionals to advance to day two, the Eagles came back on May 11 needing three consecutive wins against some of the state’s best teams to keep their season alive and advance to the state tournament.

A group of players that had never been in that situation, they didn’t back down from the challenge.

Calera didn’t just come back the next day and play some of its best softball of the season, but the Eagles won the necessary three in a row by two runs or less in each game.

It led to a thrilling day of action, as Calera downed Hueytown 5-4, Benjamin Russell 4-2 and Hillcrest-Tuscaloosa 9-8.

Entering the day off a heartbreaking walk-off loss to Hillcrest to cap off day one, the Eagles were able to shift their focus from the disappoint me quickly and focus on the task at hand early Wednesday.

Taking on Hueytown in the first game of the day, the Eagles fell behind 3-0 in the top of the second, but responded in a big way with four in the bottom half to quickly erase the deficit and take a one-run lead.

Then, in the bottom of the fifth, Calera added a crucial insurance run on a bases-loaded walk from Issy Overton to make it 5-3.

That came in handy, as the Golden Gophers were able to bring one run home in the top of the seventh.

Hueytown, however, left two runners in scoring position in the final inning after a base runner was thrown out at third to bring the game to an end and keep Calera’s season alive.

The Eagles were led by two RBIs from Emma Harrison on one hit, while Kayla Butler went 3-for-3 at the plate with one RBI. Overton also had one RBI on one hit.

In the circle, Lily Townsend pitched the first 6 1/3 innings and struck out two while allowing four runs on 10 hits and three walks. Kate Townley then came in to get the final two outs of the 5-4 win, one of which came via strikeout.

That set up a matchup with Benjamin Russell shortly after, and the Eagles got to play from in front this time around after taking a 2-0 lead in the top of the first.

Then, in the top of the third, they were able to add another key insurance run.

Up 3-0, that became important when the Wildcats scored two in the bottom of the third to draw within a run.

That led into a scoreless three innings of play, but Calera added one more in the top of the seventh to be safe.

The Eagles, however, capped off a perfect final four innings in the field with forcing a scoreless seventh from Benjamin Russell to complete a 4-2 victory.

Townley was key in the circle for the Eagles, allowing two runs on nine hits and one walk. She also struck out two in the winning effort.

At the plate, Harrison led the way with one RBI on a home run and two doubles. Kinley Rodgers and Keara Hall both added one RBI and one hit each, while Jordan Douglas finished with two hits.

That led into the decisive game.

After staving off elimination in two consecutive games, Calera earned a rematch with Hillcrest looking to avenge the heartbreaking loss 24 hours earlier with a spot in the state tournament on the line.

The Eagles took a 2-0 lead in the first inning for the second game in a row, but Hillcrest had several innings of multiple runs in the game, starting with two in the second to tie it.

Each time, however, Calera had an answer.

The Eagles snatched the lead right back in the bottom half to make it 3-2.

But the Patriots were able to bounce back and seemingly take control of the game.

They scored three in the top of the third to take a 5-3 lead and then three more in the fifth to make it 8-4.

Going to the bottom of the fifth inning, that put the Eagles in a four-run hole late in the game.

Calera, however, wiped away that deficit right away.

In the bottom half of the inning, the Eagles got an RBI double from Megan Overton, a two-run home run from Harrison, and a two-RBI triple from Hall to even the score at 8-8.

All of a sudden, they had seized all momentum, and they capitalized on it one inning later.

With one out in the inning, Megan Overton was able to capitalize on Issy Overton stealing third base. After she fouled off seven pitches in a row, she hit a deep enough ball to center field on the 11th pitch of the at bat to drive home Megan for what became the game-winning run.

Hillcrest put two on base in the top of the seventh, but a pop out ended any threat, as the Eagles picked up the 9-8 win to advance to state.

Townley picked up another complete-game win, allowing eight runs, three of which were earned, on 12 hits and four walks.

The Class 6A State Tournament will take place at Oxford’s Choccolocco Park May 17-18 and is double-elimination format.