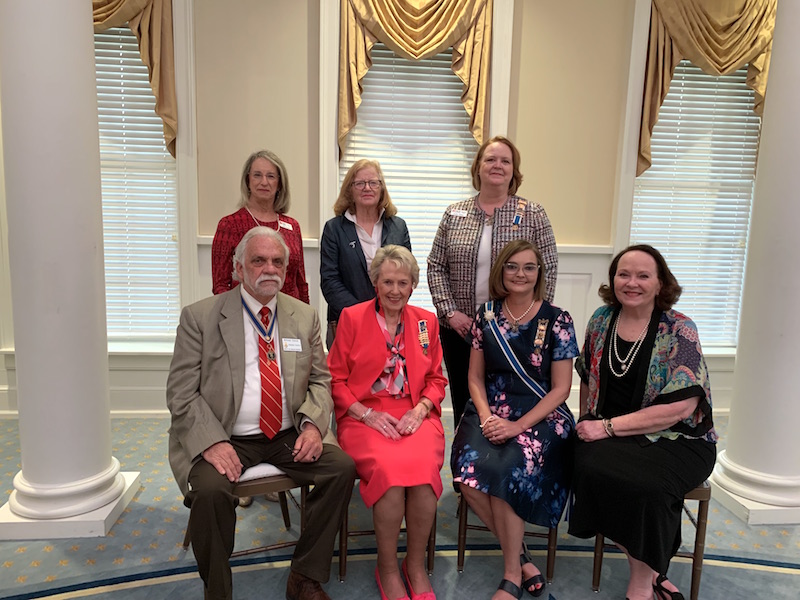 By PHOEBE DONALD ROBINSON | Special to the Reporter

Beverly Hall was recently honored for 48 years of service to the Daughters of the American Revolution.

The ASDAR David Lindsay Chapter, chaired by Daughter Neville Peacock, hosted the tea held at the Rotunda at the American Village in Montevallo.

The nonprofit, nonpolitical focus is on historical preservation, education and patriotism with more than 190,000 members in 3,000 chapters across the world.

Hall is a longtime educator who began her career as a history teacher at the Kate Duncan Smith DAR School in Grant, Alabama.

During her moving years with husband, Fred, she was a social worker in Tampa and a special education teacher in Tallahassee, Florida; Greenville, South Carolina; Selma; and Bessemer. After moving to Shelby County, she began a long and distinguished career in administration with the Shelby County Board of Education.

She was principle of the Center of Exceptional Children for six years, principal of Shelby County High School for 11 years and SCHS consultant for nine years.

Hall was also past president of Shelby County Principals Association, Shelby County Retired Educators Association and served on Pelham City Council, Pelham Park and Recreation Board, Pelham Chamber of Commerce, Columbiana Culture Club and founding member of the Friends of the Columbiana Library.

Hall joined the Caroline Brevard Chapter in Tallahassee on April 13, 1974, until she moved to Shelby County and joined the David Lindsay Chapter in 2002.

She has served as the David Lindsay Chapter’s Recording Secretary, Corresponding Secretary, Historian and chaired the Bylaws, Publicity and Scrapbook Committees.

She is a member of the DAR Heritage Club and has authored several articles for the DAR magazine.

Hall has a love of genealogy and has assisted her family with finding their DAR patriot. Attending the tea were family members including husband, Fred; son and wife Stewart and Lisa Hall from Virginia; niece Rachel Long with husband Jim from North Carolina; Julia Stewart, Tuscaloosa; Susan Luckie, Georgia; Johnnie Pearson, Tuscaloosa; and Lissie and Everett Stewart, North Shelby County.