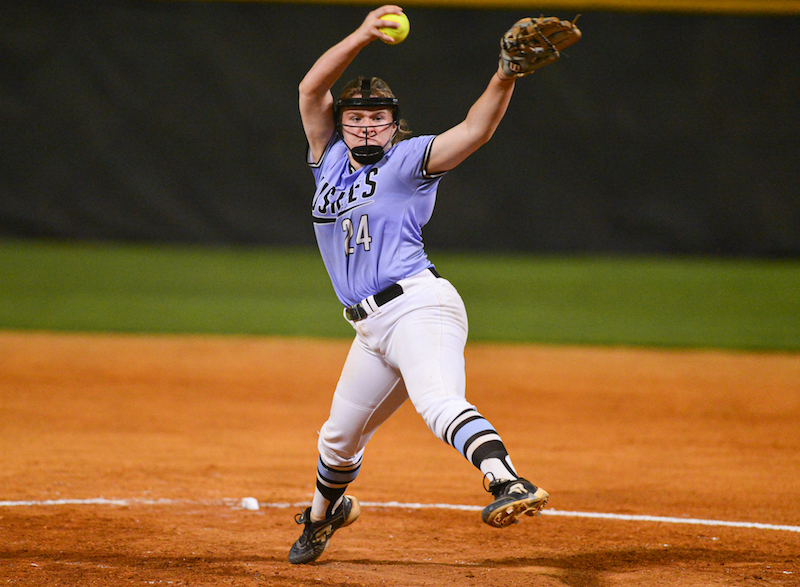 Helena's softball team is headed back to the state tournament for the second year in a row after making a run to the final day last year. (For the Reporter/Jeremy Raines)

MONTGOMERY – For the third postseason in a row, the Helena softball team will get a chance to end the season at the pinnacle after advancing to the state tournament on Wednesday, May 11.

The Huskies, who made the state tournament in 2019 and 2021, are now headed back after last year’s trip to the final day of the season as one of the final four teams left standing.

This year, they’ll not only enter motivated looking to make it all the way to winner’s circle, but they’ll enter on a nine-game winning streak with wins in 25 of their last 26 games.

And after sweeping through the area tournament with a perfect 3-0 record, regionals were no different.

In Montgomery as part of the Central Regional May 10-11, Helena gave up one combined run in another 3-0 showing, beating Hueytown 4-0, Wetumpka 10-1 and Hillcrest-Tuscaloosa 1-0.

In the opening game against Hueytown, the Huskies totaled four runs on 11 hits, which was more than enough for Ann Marie Stanbridge in the circle.

Big as one of the top pitchers for the team during last year’s run as well, Stanbridge went the distance, allowing no runs on four hits and two walks with 10 strikeouts in the complete-game shutout.

Helena broke open a 0-0 tie with one run each in the third and fourth innings to take a 2-0 advantage. They then added two insurance runs in the bottom of the sixth to make it 4-0 ahead of the final inning.

Stanbridge then came back out and struck out the first two batters before a ground out to first base ended the game with a 1-2-3 effort in the field.

Cam Bailey was 3-for-3 in the win, while Alex Erwin and Stanbridge both had two hits. Stanbridge also had an RBI, while Presley Lively and Grayson Barnett each added one RBI on one hit.

In the winner’s bracket, that set up a battle with Wetumpka later that afternoon.

This time around, the Huskies made their hits count by turning 10 of them into 10 runs.

In addition to that, the pitching remained hot.

This time around, it was Bailey in the circle, and she kept a strong day going by allowing just one run on one hit and three walks. She finished the complete-game effort with eight strikeouts to earn the win.

Alana Scott led the team with three RBIs on one hit, while Bailey added two hits and two RBIs. Stanbridge also finished with two more hits and had one RBI.

Beyond those three, Bella Holliday, Barnett and Allie Graydon all had one hit and one RBI.

That put the Huskies one win away on Wednesday from a spot back in the state tournament.

And it only took one run to get that one win.

In a game that featured five combined hits, it was an error that made the difference.

After a lead-off walk from Holliday in the bottom of the second, two outs were recorded.

Holliday, however, moved into scoring position, which paid off when Barnett hit a hard ground ball to short that ended with an error and allowed Holliday to cross the plate for what became the game-winning run.

Bailey continued a strong regional of pitching for Helena with a nine-strikeout effort in the complete-game shutout. She allowed two hits and one walk in the process.

Lively, Scott, Stanbridge and Mary Beth Allen all had one hit each, while Holliday drew two walks.