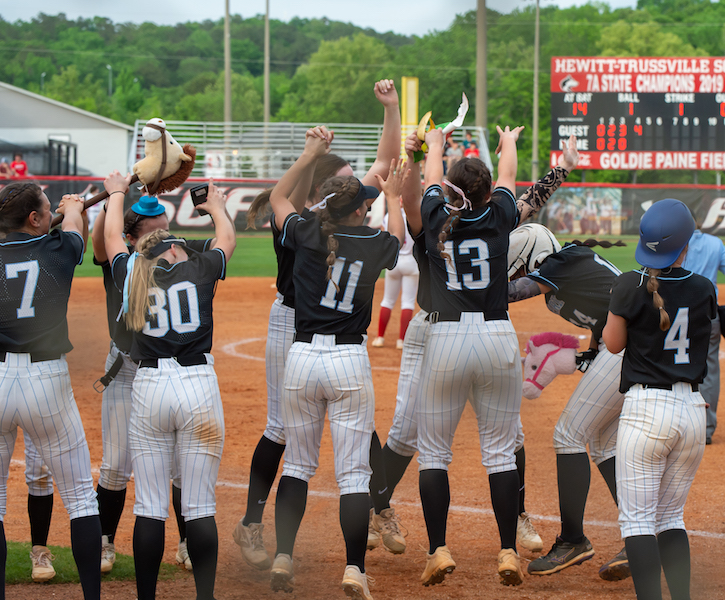 Spain Park’s softball team took down Sparkman twice on Thursday, May 12 to advance to the state tournament. (File)

ALBERTVILLE – With their season on the line and the hopes of earning a trip back to the state tournament after missing out a year ago, the Spain Park Jaguars stepped on the field Thursday, May 12 for their third game of the day determined.

That determination showed quickly, as the Jaguars scored eight runs in the second inning of the elimination game with Sparkman, eventually winning the game 9-0 to accomplish one of many goals left this season.

It marked the second shutout of the day against Sparkman for the Jags, as a strong pitching effort from Ella Reed became key.

In the elimination game, she struck out nine batters and allowed no runs or walks with five hits to pick up the win.

The Jags also added one more insurance run in the bottom of the fourth for good measure, leading to the 9-0 win.

At the plate, Spain Park got two hits and three RBIs from Emma Jolley in the win, while Emma Hawkins finished with a solo home run and two runs scored. Katie Flannery added two RBIs on one hit, while Caroline Whisenhunt, Maggie Daniel and Reed all had one hit and one RBI in the must-win game.

The Jaguars opened the day with similar success, taking down the Senators 7-0 in the first game of the regional tournament.

Similar to game later in the day, the Jags were able to build an early insurmountable lead thanks to three runs in the first and two in the second.

They didn’t score again over the next four innings, but it didn’t matter due to another strong effort in the circle.

They added two more insurance runs in the top of the seventh, while Whisenhunt finished off an impressive combined effort between herself and Reed in the circle.

Hawkins started a strong day of regional action with a 3-for-3 game featuring her first of two home runs on the day. She also scored three runs in addition to her lone RBI.

The Jags got two hits and one RBI from Flannery, while Daniel had a hit and RBI. Charlee Bennett and Reed both finished with one RBI in the win as well.

Spain Park went on to lose 6-2 to Hewitt-Trussville in the second game of the regional tournament, forcing the Jags into the consolation bracket, but it set up the second shutout of Sparkman to advance to state.

Blakley Watts led the Jags in the loss to the Huskies thanks to two RBIs on one hit.

The Jags will head to Choccolocco Park in Oxford for the state tournament May 17-18.

No. 2 Indian Springs advances to title with thrilling…