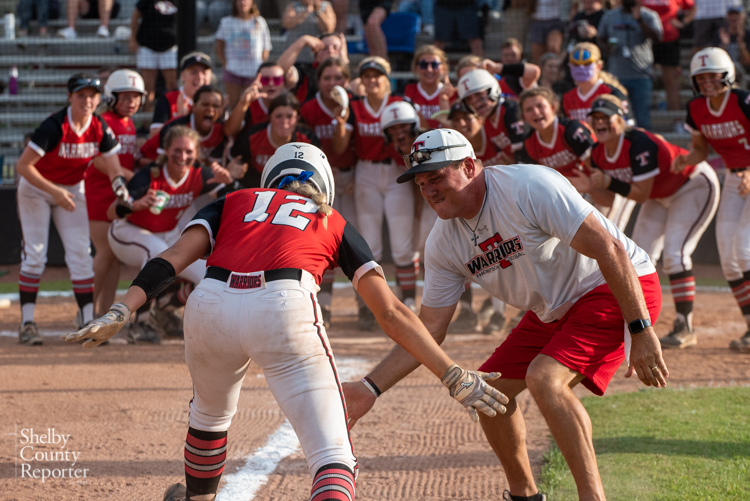 Thompson’s softball team swept through regionals with two wins on Thursday, May 12, including a nine-inning win against rival Hoover to earn a spot at the state tournament. (Reporter photo/Keith McCoy)

FLORENCE – The Thompson Warriors softball team is headed back to the Class 7A state tournament.

After two nail biters against Bob Jones and Hoover rendered two harrowing results, Thompson emerged with 2-1 and 10-7 victories in Florence on Thursday, May 12, including an extra-inning effort against the Bucs for another shot at capturing the state title.

The wins avenged 2021 postseason losses to Bob Jones and Hoover, but each game took on a totally different feel.

The Warriors took on the Bob Jones Patriots in the first game of the day that turned out to be a pitcher’s duel. Neither team scored until the sixth inning, as Thompson’s Eleanor DeBlock nearly tossed a complete-game shutout.

Bob Jones didn’t get a hit until the fourth inning as DeBlock spread out three hits over 6 2/3 innings. Thompson threatened briefly in the bottom of the fourth inning when Olivia Tindell snuck her way to first base on a sneaky bunt to lead off. Laney Williams followed that with a single on a grounder to second base.

Ella Pate stepped to the plate next and made contact, but the ball was snagged on a big catch in right field and Williams was caught in the base path for a surprise double play.

DeBlock allowed just one base runner in the fifth and sixth innings and led off the bottom half with a single to center field.

Two batters later, Tindell broke through again with another bunt single. Neely Davis, pinch running for DeBlock, advanced to third on an error from the second baseman, but a fly out forced Thompson to their final out.

Fortunately, that out was Pate, who wasn’t about to let another opportunity be stolen away during her senior season. Pate sent a single into right field scoring both Davis and Tindell giving the Warriors a 2-0 lead they didn’t relinquish.

However, Thompson still had some drama in the seventh inning.

DeBlock struck out her ninth and 10th batters after allowing a leadoff single, but then walked the next two batters to load the bases.

Holly Selman stepped in to finish the game, but walked in a run to make it 2-1. Selman settled in next and forced a fly ball to center field where Tindell made the final out for the win.

Thompson’s bats woke up in the second game of the afternoon, but Hoover was equal to the task as the two teams battled back and forth in a classic rivalry matchup.

The Bucs took a quick 2-0 lead in the bottom of the first inning.

The Warriors responded in the third with a big five-run inning to take the lead.

Clemmons got in on the fun next with a double to right field scoring two more runs. Hannah Hobbs and Allie Bauer also came in clutch with RBI singles to give THS a 5-2 lead.

The lead, however, was short lived as the Bucs came back with three runs in the bottom of the third on two hits and three walks.

Hoover then retook the lead in the next inning after taking advantage of another error and some good base running for a 6-5 advantage.

Thompson had base runners in the fifth and sixth innings, but came up short and took the 6-5 deficit into the seventh.

Pate, however, remained hot and came up for her team in a big way by slapping a triple to right field to put the Warriors back in business.

Jenna William sent Pate home with a sacrifice fly to tie the game 6-6, but Thompson wasn’t done yet.

Clemmons came up huge again and crushed her own triple to left field with Hobbs following it up with a sacrifice fly to give THS the 7-6 lead.

Elenor DeBlock returned to the circle to close the game out, but Hoover wasn’t going away. Two leadoff singles and a sacrifice bunt to put the runners in scoring position.

A sacrifice fly on the next at bat tied the game 7-7 and sent the game into extra innings.

DeBlock, who threw 149 pitches between her two appearances on the day, did not give up a single hit in her final two innings of action, which allowed her teammates to bring home the win in the ninth inning.

Jenna Williams and Hannah Hobbs both singled to get the bat to Kendall Channell with one out. Channell had gone hitless in her first five at-bats of the day, but lined a double to left field to give Thompson the winning runs and a 9-7 lead.

She also scored the final insurance run as Motes singled her in two batters later.

Jenna Williams was a perfect 4-for-4 with two RBIs and a run scored in the win and 5-for-6 overall on the day. Tindell had an equally impressive afternoon, going 6-for-9 and scoring two runs.

The state tournament will take place May 17-18 at Choccolocco Park in Oxford.