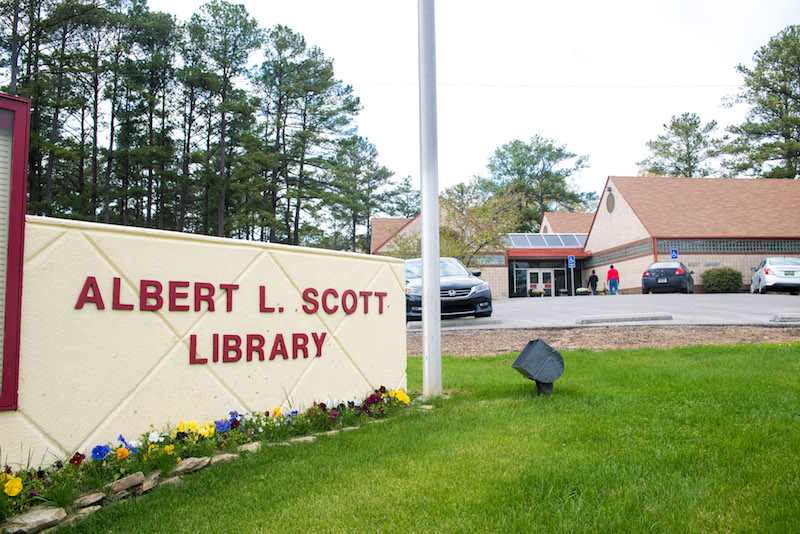 Plans for a new library in Alabaster are underway with a possible new location at the future recreational area set to be built near the intersection of Alabama 119 and Thompson Road. (File)

ALABASTER – Preliminary plans for a new library in Alabaster are underway as city leaders work with library staff on possible building designs.

Alabaster Mayor Scott Brakefield and City Administrator Brian Binzer met with Albert L. Scott Head Librarian Kimberly Roberts and members of the Friends of the Library in April to talk about a possible new location of the library.

City officials shared plans for a new library that would be part of the new development project at the intersection of Alabama 119 and Thompson Road.

At that location, the city purchased about 24 acres from Alabaster City Schools to house a new city recreational center, a retail development and park and green space, as well as a potential new library.

The city has hired an architect to create preliminary designs of the new library. It is working to acquire renderings to share with library staff and Friends of the Library.

“We are at the very beginning stages of a new library,” Roberts said. “We have not discussed any specific design components or layout as of yet. A tentative completion date would not be until at earliest 2026.

She said the hope is that a new library will include distinct departmental space for collections with extra seating throughout, a commons area, quiet study areas and/or rooms, a computer lab, extra public computers separate from the lab, multiple meeting rooms, a conference room, a Friends (of the Library) room, makerspace, adequate staff workspace and functional storage options.

Roberts said she is excited to take this journey and see what the future holds in terms of a new building location.

“We are grateful to our city administration and council for their support and consideration,” Roberts said. “We are also humbled by all of the hard work our Friends and Board has done and continue to do to lay the groundwork for this long-standing dream to become a reality.”

Roberts said roughly 35 percent of the population in Alabaster has a library card. On average, the library circulates 8,000 items, hosts 350 computer sessions and facilitates 10-12 programs per month (doubling that during the summer months). The numbers do not account for groups who come to the library to meet, use their own devices or to study or tutor.

“A new location will be excellent,” Roberts said. “The library would be more centrally located and thus more accessible to most of the citizens instead of being nestled within a neighborhood, hidden. Visibility will increase tenfold. Being part of a city center will make it much easier for everyone to just stop by the library as part of their routine instead of making a special trip across town.”

Roberts pointed to many challenges facing the existing library.

“A new facility will alleviate some of our current challenges, which include storage, inadequate workspace for staff and safety considerations due to cramped spaces,” she said. “A new building will also ensure growth and diversification of collections, and ample meeting space will allow for expanded and simultaneous programing optionality.”

The Friends of the Library work as a group of advocates and host fundraisers for the library.

The group is a 501(c)3 organization that is raising funds specifically for a new library.

Its goal is $250,000 to help with purchases designed to enhance user experience after the new library opens.

Earlier this month, the Friends opened a Bonfire account where individuals can purchase T-shirts, mugs and totes with all the proceeds benefiting the building fund.

The group is also looking for active members to join and help with fundraising. New members can join for $10 a year.

To purchase an item in support of the new building fund from the Bonfire account, visit www.bonfire.com/store/friends-of-the-albert-l-scott-library/.