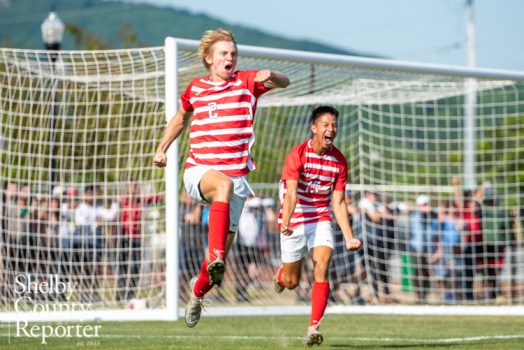 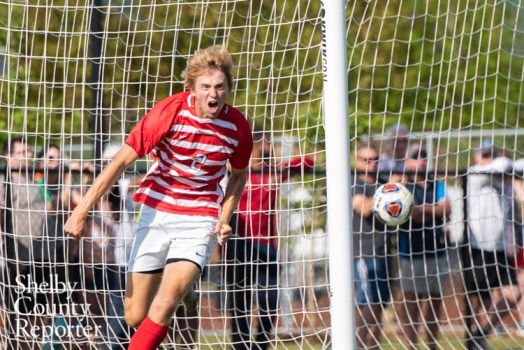 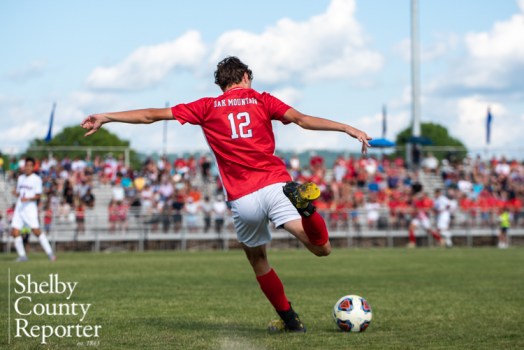 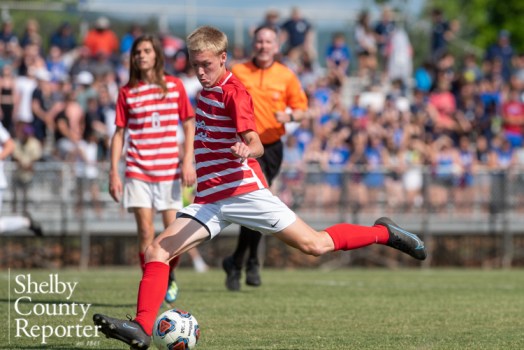 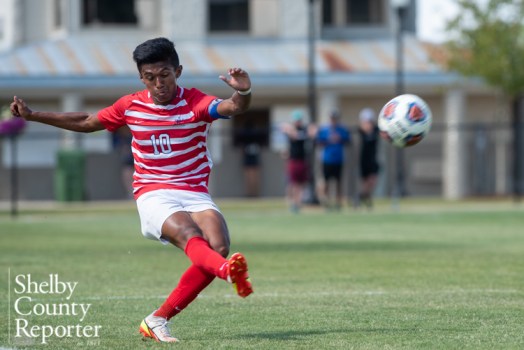 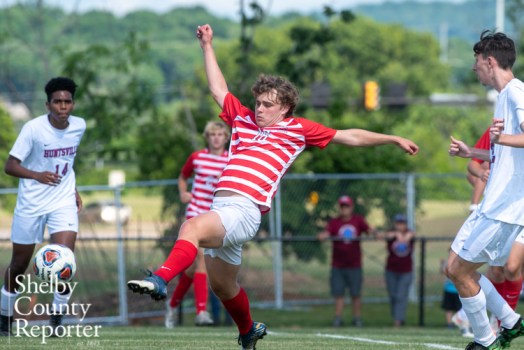 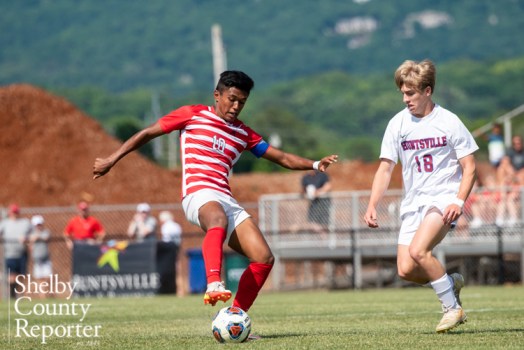 HUNTSVILLE – After coming close so many times throughout the game, Aidan Riley broke through at the most opportune time of Oak Mountain’s Final Four battle with Huntsville on Friday, May 13.

Following a scoreless battle through 80 minutes of play between the two teams, it only took two minutes of one overtime for Riley to leave his mark on history for the Eagles.

With traffic in the box, he watched as a play in from teammates Nate Joiner and Houston Graham floated over his head just inside the goalie box.

As the ball fell out of the air, Riley connected it to his right foot before it hit the ground and rocketed the ball to the back-right corner out of the reach of a surprised Huntsville keeper to give Oak Mountain a 1-0 semifinal victory.

As soon as the ball hit the net, Riley turned to his teammates and went in full-on sprint with his hands in the air toward his teammates where a pile of celebration ensued, including hugs from boys head coach David DiPiazza and girls head coach Chris Blight.

The win advanced the Eagles back to the Class 7A State Championship game for the first time since their final of three consecutive titles in 2017.

The goal from Riley capped off a game that featured several chances from both sides but no goals for 80 minutes of action.

The first 40 minutes of the game saw a balanced affair between the two teams, but six first-half penalties for Oak Mountain gave Huntsville several good looks, including an early penalty kick.

The Panthers earned that opportunity 16 minutes into the game, but the kick by Brayden Straight sailed wide left to keep the game scoreless.

From there, Oak Mountain flipped a switch and started to earn more possessions down the stretch of the first half.

That ultimately led to a header that just missed with 11:15 left and a free kick that missed just right of the goal with 8:22 left.

The Eagles couldn’t score, but the strong push to end the half from Oak Mountain gave the feel of a balanced first half, as both keepers were forced to make two saves on six shots from Huntsville and five from Oak Mountain to send the game into the half scoreless.

That seemed to set the tone for a back-and-forth second half that featured plenty of action, but still nobody finding the back of the net.

Oak Mountain controlled the first 15 minutes of the second half, while Huntsville responded with a strong next five minutes.

Then, the two traded opportunities over the final 15 minutes of the second half, including Huntsville earning a close free kick and corner in the final 30 seconds.

The Panthers, however, couldn’t capitalize, and the Eagles quickly made them pay after forcing overtime and winning in the first two minutes.

Oak Mountain will now take on Daphne in the championship game on Saturday at noon.

So far in the playoffs, the Eagles have yet to give up goals in wins of 4-0, 2-0 and 1-0 (Twice). Daphne’s playoff run, however, has featured four goals or more in the last three games.