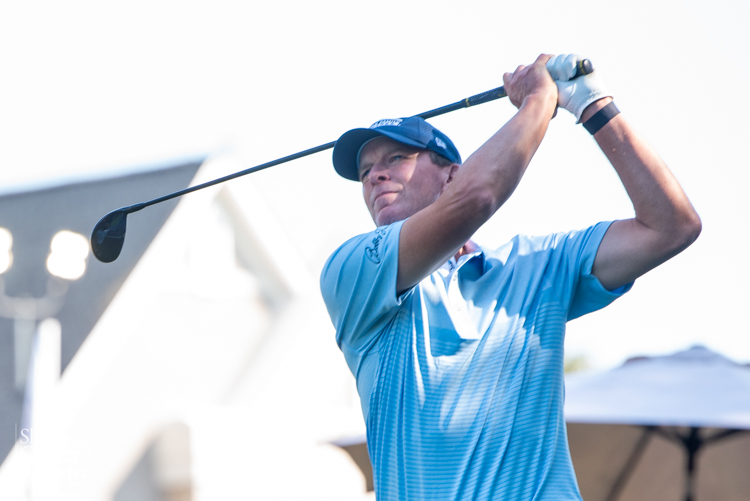 HOOVER – Steve Stricker is no stranger to the top of the leaderboard at the Regions Tradition, and after one round, he finds himself on top.

Stricker shot an opening-round 65 on Thursday, May 12 to take the lead in the PGA TOUR Champions first major championship of the season by two strokes.

Three years ago, Stricker won the tournament for his first career major championship and last year, he carried the lead into the final round before coming short of going back-to-back after Alex Cejka went on to beat him in a playoff.

Now, he finds himself in the lead by two going into the second round.

He was two clear of both Miguel Angel Jimenez, who won the tournament in 2018, and Wes Short, Jr. Both fired rounds of 67 to reach 5-under, while Stricker shot an opening 65 to reach 7-under.

Behind those three was a group of eight players tied at 4-under par, including John Daly, Stuart Appleby, Rod Pampling, Ernie Els and others.

For Stricker, it marks a continued special return to the game after a mysterious health issue that flared up near the end of 2021 and into the new year.

His first appearance back came at the Insperity Invitational earlier this month. In that event, he came out and shot a cumulative score of 14-under par to finish in a tie for second.

The tournament will continue through Sunday, and Stricker is slated for an 11:24 a.m. tee time on Friday alongside Jim Furyk and Retief Goosen. Goosen is at 3-under after day one, while Furyk is 3-over.

Daly, who is with Rocco Mediate and Steve Flesch, will go off at 11:02 a.m., while other big names will start earlier.