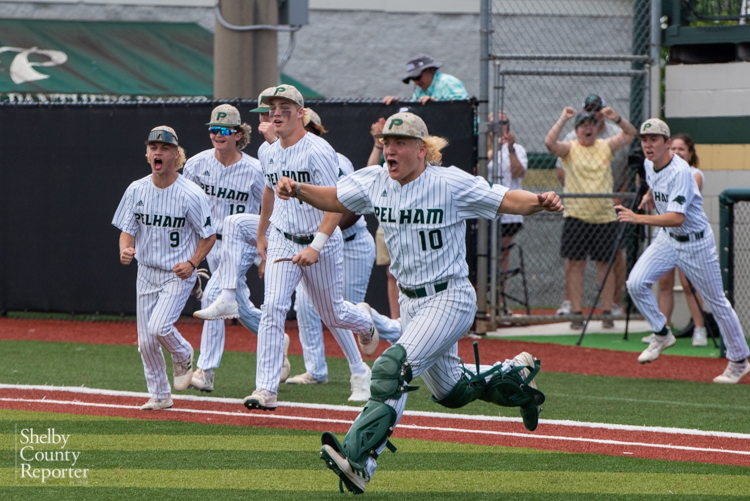 TUSCALOOSA – For the third week in a row, the Pelham baseball team faced elimination in the playoffs, but nothing was going to deter a team on a magical run.

After losing game one of a Class 6A semifinal series with Hillcrest-Tuscaloosa, the Panthers responded with impressive pitching for the third week in a row to stave off elimination and earn a trip to the Class 6A State Championship series.

The Panthers, who have won games one and three the previous two series, took a different approach this time around and had even more pressure on themselves after dropping game one to the Patriots 6-3.

In game two, Wilkins got the start after two flawless game threes the last two weeks, replacing Egan after he had lost the previous two game twos.

Wilkins stepped up for the third week in a row with his team’s season on the line and pitched another complete-game gem.

He struck out 11 and gave up two runs on four hits and two walks, while the offense gave him an early 3-0 advantage to work with.

At the plate, Cody Bethers was big in the elimination game with two hits, including a double, and two RBIs. Jake Fox also added two RBIs on one hit, while both Egan and Calvert added one RBI with Egan picking up one hit in the win.

The four-run victory earned Pelham a winner-take-all game a day later to determine which of the two would advance to the championship series.

For the Panthers, a team that entered the postseason with a sub-.500 record, it was another chance to prove they belonged.

Not only that, but they were more than comfortable in their third consecutive game three.

This time around, Egan got the start in the rubber match, and with a chip on his shoulder, he powered the Panthers to a hard-fought one-run victory.

Again, the offense was able to give him some early help thanks to Wilkins and Christian Pritchett both going deep in the top of the first with solo home runs.

Hillcrest, however, worked hard to battle back and scored one in the second and one more in the fifth to even the score.

But as they’ve done so many times in the postseason, the Panthers got timely hitting and had a response.

In the top of the sixth, just after Hillcrest had tied the game, Egan helped himself out.

After Pritchett led off the inning with a walk and was moved over to second on a sac bunt, Egan stepped in ready to give his team the lead back.

Eventually working the count to 3-1 in his favor, Egan took the fifth pitch he saw and drove it to center field, allowing Pritchett to round third and score what became the game-winning run.

He struck out four and allowed two runs on eight hits and two walks in the victory.

Wilkins and Pritchett both finished the game 2-for-2 with one RBI thanks to their home runs in the opening inning, while Egan added a 2-for-3 game with one RBI to help himself and the team out.

Pelham will now close out a special postseason in the Class 6A State Championship series against top-ranked Hartselle.

The series will start on Thursday at 7 p.m. at Oxford’s Choccolocco Park. Game two will take place Friday at 4 p.m. at Jacksonville State, while the if necessary would take place directly after.