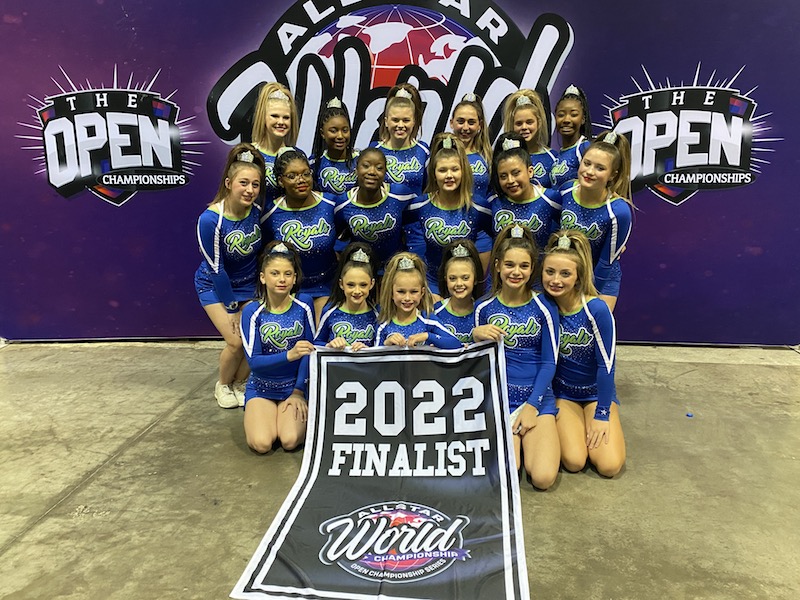 Four out of five teams from Pelham’s Alpha Extreme Cheer gym earned bids to compete at the All Star Worlds competitive cheer competition in Orlando, Florida in Early April. Pictured are the members of the junior level two team, Monarchs, who placed first in their group at semifinals and moved into finals placing 11th out of more than 100 teams in their division. (Contributed/Jennifer Taylor)

PELHAM – Alpha Extreme Cheer, a cheerleading gym located in Pelham, has had a busy year training for competitive cheer season, and all of their hard work has certainly paid off.

Four of the gym’s teams earned bids to compete in the All-Star Worlds competition in Orlando, Florida in April.

Alpha Extreme’s owners Jennifer and Jay Taylor were more than thrilled at the progress their teams made.

“It’s an exciting time for them. It’s encouraging to see all of the hard work they’ve put in and the dedication they put in throughout the year that it’s paying off at the end of the year,” Jennifer said.

Jay said, as a coach, it gives him a feeling of fulfillment.

“At the end of the year, seeing them go from where they started and seeing the growth they’ve had throughout the year, and then seeing it all pays off in the end because they were able to reach that goal, that’s something really special,” Jay said.

The majority of Alpha’s athletes are based in Shelby County, and spend the entire year training several hours a week to prepare for the competition season. Jennifer said in addition to practicing, the team members are also taking part in tumbling and other classes throughout the week.

“They’re in the gym seven or eight months prior to the first competition just to prepare for it, and then once competition season starts, they’re still practicing and competing at the same time and continuing to upgrade the difficulty in their routines,” she said.

All five of the Alpha Extreme teams for the 2021-2022 season began competitions in December with the goal of earning a bid to All-Star Worlds held in Orlando on April 21-23.

“Of our five teams this season, four of them earned bids to compete along with 11,000 other teams from around the country as well as three other countries,” Jennifer said.

Athletes compete by age division and skill level. Alpha’s senior level three team, Lady Reign, moved on to finals and placed fifth out of 14 teams total in their division. The junior level 2 team, the Monarchs, placed first in their group at semifinals and moved into finals, placing 11th out of more than 100 teams in their division. Their youth level 2 team, Sovereign, moved on from semifinals to finals and ended the competition in 19th out of more than 80 teams, and their junior level one team, Supremes, competed in the semifinals, but just missed moving on to finals.

Being able to watch the success of young individuals with a passion for the sport was part of the Alpha Extreme plan from the beginning, according to Jennifer.

“[Jay’s] whole goal in opening a gym was helping further these athletes in reaching their goals whether it’s getting a scholarship or becoming a professional athlete so they can make a future for themselves,” Jennifer said. “Our goal is for our students to become amazing athletes, but even better leaders on and off the mat.”

Jay added they want to fight any negative views of cheerleading the public may have.

“There’s always been a stigma around cheerleading that it’s not really a sport or serious, but at the end of the day it is a sport, and we take it very seriously,” he said. “I’ve been doing this since middle school…and I want people to understand that we aren’t just creating cheerleaders, we’re creating genuine athletes and building responsible adults.”