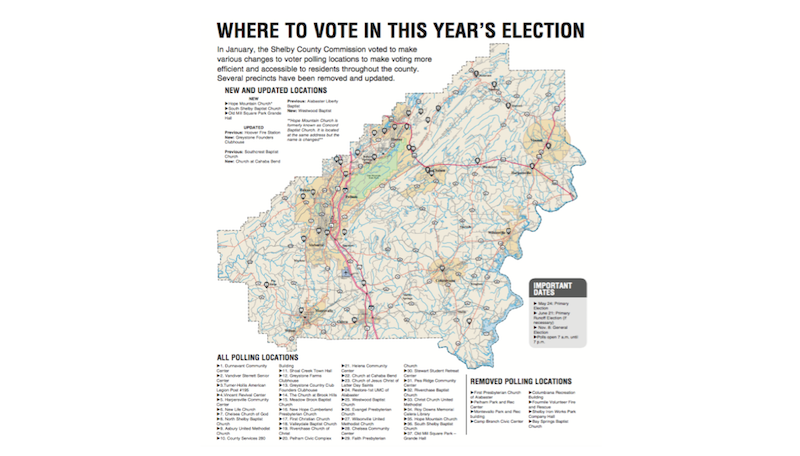 Shelby County has made updates to its voter polling locations to make voting more efficient and accessible to residents throughout the county. (File)

Some Shelby County voters will notice changes in their polling precincts this upcoming election season as several precincts have been removed and updated.

Back in January, the Shelby County Commission voted to make various changes to voter polling locations to make voting more efficient and accessible to residents throughout the county.

Boyd said several precincts were meeting the maximum mark of voters per polling pad, and once the data was analyzed, it was determined that it would be more efficient to combine precincts and give the precincts more equipment to utilize the resources and process voters more efficiently.

Boyd said locations were updated for several reasons including inadequate parking, traffic flow, staffing issues and for the desire of the county to maximize “human and equipment resources in several locations.”

Space constraints were another major hindrance that was addressed during deliberation.

“We had some places that lines were out the door simply because the precinct was so small, and, to be honest, people would drive by and see the line out the door and they think, ‘Oh my gosh, I’m going to be waiting forever,’ even if that’s not the case necessarily,” she said. “We don’t want somebody not to vote because they think it will take a long time. So, having a bigger precinct, we’re hoping that will increase the voter turnout.”

Boyd said careful consideration was made to make sure all precincts would be places that are easily accessible to the public, have appropriate handicap accessibility and can safely and properly accommodate the number of voters in a given area.

**Hope Mountain Church was previously Concord Baptist Church but has since changed its name.

For those who have questions about their district, visit Alabamavotes.com.